NVIDIA has been on fire as of late. Their Ampere Gpus have proven to be quite the gaming GPUs for 4k gaming and other heavy computational tasks. The additional tensor cores mean that training large datasets or rendering 4k videos always take place at blazing fast speeds. They have proven to be quite the performance boost for owners of Turing and Pascal cards, which have become outdated pretty fast. There’s one problem though – availability. That had prompted some unsavory practices, including the increased marked prices of FE models for the cards on launch.

Benefits of saffron tea - lovelcute
Best Home Sauna To Stay Warm All Wint…
Urban, Suburban, or Rural Practice: P…
How to Price Your Craft & Design (par…
What Does the Future Look Like for Bl…

The pricing for the Ampere cards had attracted many a gamer who wanted to upgrade to the new generation of NVIDIA graphics cards. The problem was availability, which was further accentuated by unsavory middlemen who wanted to take advantage of the situation. Third-party vendors have been manipulating prices to take advantage of the low supply of the graphics cards – and even FE models were being sold for sky-high prices.

Little is known about what went down, but prices were reverted to the actually announced prices after a while. Stocks of FE models of Ampere GPUs – especially the RTX 3080 and the RTX 3070 – continue to be an issue, but they will eventually be resolved once the demand decreases a little. 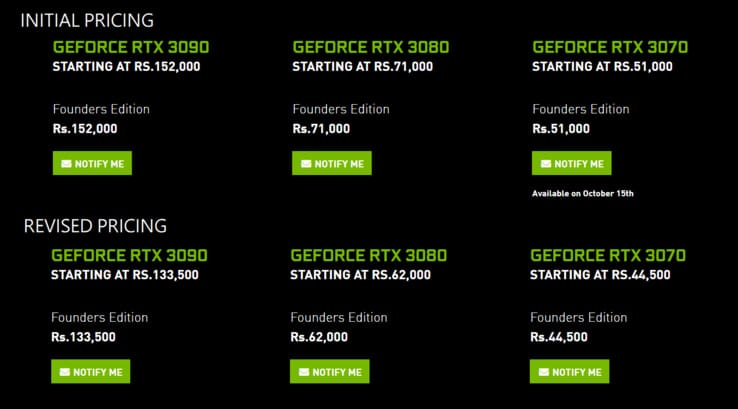 The community has been divided about this issue, and they do not know what is going on the scenes. There has been some speculation that AMD’s announcement of RDNA 2 cards might have forced NVIDIA to revise the prices of the FE models in order to ensure that there continues to some competition in the market. Of course, the pessimistic ones are suggesting that NVIDIA is trying to ensure consumer satisfaction by ensuring that everyone gets a GPU at the announced prices.

Founder’s Edition models might have their original prices restored, but stocks are still scarce. Cards from AIB partners are still selling for extremely high prices and might need manual intervention from NVIDIA (and the individual brands) to resolve the issue.

This post first appeared on TechQuila, please read the originial post: here
People also like
Benefits of saffron tea - lovelcute
Best Home Sauna To Stay Warm All Winter
Urban, Suburban, or Rural Practice: Pros and Cons
How to Price Your Craft & Design (part 2)
What Does the Future Look Like for Blackjack – Does it Need to Evolve?
Here’s Our First Unofficial Look at Asus Zenfone 8 & Zenfone 8 Flip
6 Work-From-Home Essentials That Will Enhance Your Productivity