Patrick Schur has now shared some specs for the Navi 21 XT card, suggesting it will come with 16GB GDDR6 memory and run at 2.4 GHz, all under 255W TGP. Schur has previously shared a lot of info regarding AMD’s upcoming graphics card lineup. While the current information is not confirmed, it’s also not completely implausible.

The only real world numbers that have been shared regarding benchmarks of (one of) the card(s) are what Lisa Su revealed during the last presentation. 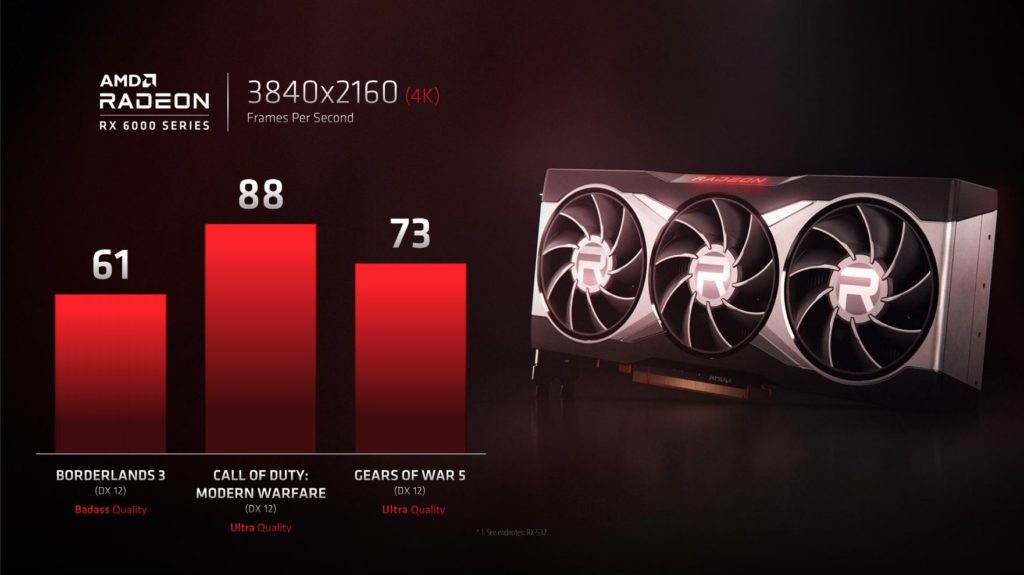 We still don’t know for sure whether these benchmarks were done of the Big Navi card, or something lower than that. The former is more likely, as these numbers give tough competition to NVIDIA’s RTX 2080 Ti.

We previously reported that Navi 21 might feature up to 80 Compute Units, running around 2.2 GHz. This new leak from Schur does line up with that, suggesting that RDNA 2 is built for high clock speeds.

While we wait for AMD to officially unveil the card(s) on October 28, more leaks and rumours are bound to be shared. I do hope that when the lineup is revealed, that we get the entire lineup and not just the top-end card, which realistically most people wouldn’t be able to get anyway. AMD has a lot to prove with Navi 21 XT (RX 6900 XT), since just including ray tracing may not be enough. NVIDIA’s DLSS has started to mature well and is essential when you look at how RT features are computationally expensive. We’ve yet to see whether AMD includes such a feature as well.

With PlayStation 5 and Xbox Series launching in mid-November, AMD would want to release these cards earlier than that as promised. That might mean we’ll see RDNA 2 launch alongside Zen 3 on November 5.

Ultimate Plumber SEO Guide : How to Grow Your Business