Engineers at the University of New South Wales (UNSW), Sydney in Australia have created a soft wearable device that recreates the sense of Touch using Haptic technology and has wide potential for medical, industrial and entertainment applications. The study was published in the Institute of Electrical and Electronics Engineers (IEEE) Access journal.

The word haptic is derived from the Greek word ‘haptikos’, which means ‘tactile, pertaining to the sense of touch’. Haptic technology or 3D touch is any technology that can create an experience of touch by applying forces, vibrations, or motions to the user. 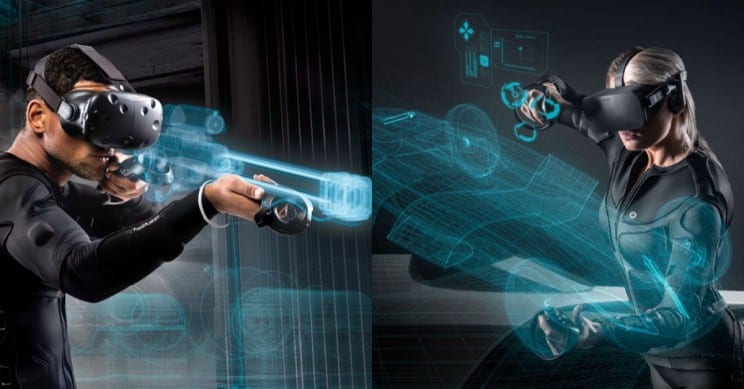 Dr Do said the sense of touch was something many people took for granted while performing daily tasks. “When we do things with our hands, such as holding a mobile phone or typing on a keyboard, all of these actions are impossible without haptics,” he said.

He further added, “the human hand has a high density of tactile receptors and is both an interesting and challenging area to encode information through haptic stimulation because we use our hands to perceive most objects every day. There are many situations where the sense of touch would be useful but is impossible: for example, in a telehealth consultation, a doctor is unable to physically examine a patient. So, we aimed to solve this problem.”

Dr Do said that the researchers were so excited and assured about the new haptic technology that they have applied for a patent. “Our three-way directional skin stretch device (SSD), built into the fingertips of the wearable haptic glove we also created, is like wearing a second skin — it’s soft, stretchable and mimics the sense of touch — and will enable new forms of haptic communication to enhance everyday activities,” he said.

“What’s also special about our new technology is that it’s scalable and can be integrated into textiles for use in various potential applications such as telehealth, medical devices, surgical robots and training, augmented and virtual reality, teleoperation and industrial settings.

“The device aims to solve a common problem in emerging systems — such as assistive devices, remote surgery, self-driving cars and the guidance of human movements — where visual or auditory feedback can be slow, unintuitive and increase the cognitive load.” 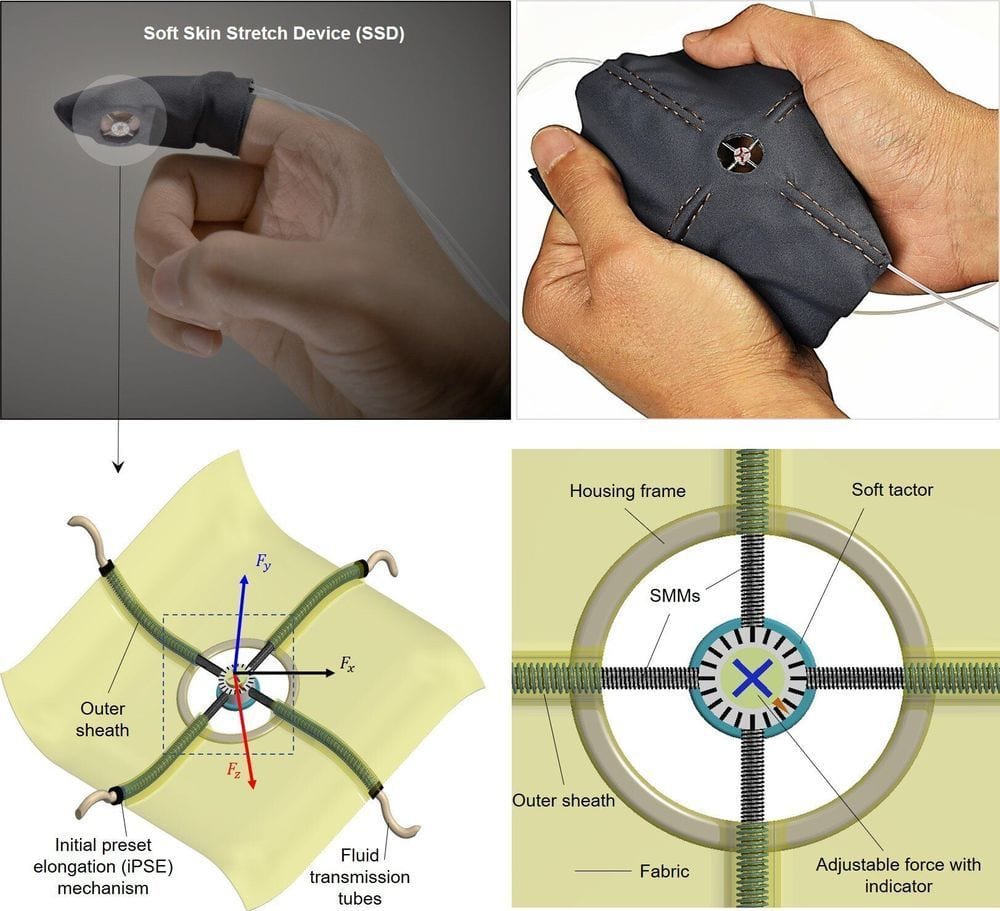 Why haptic technology needs to improve

Mai Thanh Thai, the lead author, explained how the existing technology had great difficulty in recreating a sense of touch using objects in virtual environments or located remotely. “Visual or auditory cues are easy to replicate, but haptic cues are more challenging to reproduce. In a virtual environment, we can see objects but we are unable to feel them as if we were directly touching them,” Mr Thai said.

“It is almost impossible to enable a user to feel something happening in a computer or smartphone using a haptic interface, such as commercially available smart glasses. Vibration is the most common haptic technology today and is built into many electronic devices, such as the Taptic Engine attached to the back of a trackpad in laptops, which simulates a button clicking.

But haptic feedback with vibration becomes less sensitive when used continuously or when users are in motion, leading to desensitisation and impaired device functionality.” 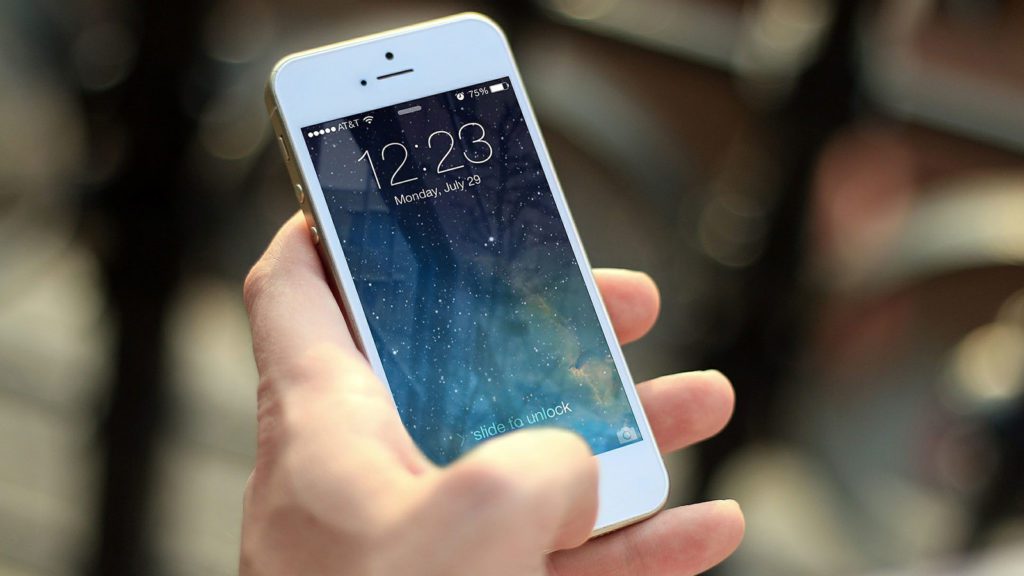 How the new haptic device works

Dr Do said that the new technology overcomes the issues that existing haptic devices posses by proposing a new method to recreate an effective haptic sensation via soft, miniature artificial “muscles”. “Our soft, wearable haptic glove enables people to feel virtual or remote objects in a more realistic and immersive way. The inbuilt soft artificial muscles generate sufficient normal and shear forces to the user’s fingertips via a soft tactor, enabling them to effectively reproduce the sense of touch,” he said.

“It works like this: imagine you are in Australia while your friend is in the United States. You wear a haptic glove with our integrated three-way directional SSDs in the fingertips and your friend also wears a glove with integrated 3D force sensors.

“If your friend picks up an object, it will physically press against your friend’s fingers and their glove with 3D force sensors will measure these interactions. If these 3D force signals are sent to your haptic glove, then the integrated three-way directional SSDs will generate these exact 3D forces at your fingertips, enabling you to experience the same sense of touch as your friend.”

Implications of the new technology

Dr Do believes that the technology will have a wide range of benefits, for example, in today’s time when we all are in the middle of a pandemic and are relying on video calls to stay connected. “Unlike existing haptic devices, our technology is soft, lightweight, and thin and therefore, we hope users will be able to integrate it into what they’re wearing to provide realistic haptic experiences in settings including rehabilitation, education, training and recreation,” he said.

“Our technology could enable a user to feel objects inside a virtual world or at a distance; for example, a scientist could feel a virtual rock from another planet without leaving their lab, or a surgeon could feel a patient’s organ tissues with surgical tools without directly touching them.” Dr Do estimated the new technology could be made available in the next 18 months to three years — if plans to commercialise the device are realised.

“The next step is to conduct user evaluations to validate how effective our device is because the main scope of our current research has been on the design, fabrication and characterisation of the new technology,” he said.

“In addition, we plan to implement the device in various haptic applications such as haptic motion guidance, navigational assistance for older people and those with low vision, tactile textual language, and 3D force feedback display for use in surgical robots, prosthesis and virtual and augmented reality,” he added.