A few months ago Oneplus launched its new ‘Nord’ smartphone series to cater to a more budget-conscious audience. The first smartphone in this series was OnePlus Nord, which made it to a few select regions while markets like the United States were left out, but, OnePlus confirmed that Nord will be coming over to these regions at a later date. Now, it seems like the time is finally here as the rumour mill has indicated that OnePlus is all set to launch two new smartphones in the Nord series later this month.

The Best Places to Live in Canada
Nothing Phone (1) Launch on 6/9 at 4:…
Place des Vosges, Paris’ Oldest Plann…
OnePlus Buds Z2 Review: Too Much Bass…

Also Read: OnePlus to Launch an Entry-Level Smartphone in the US

These two new Nord smartphones bear model number N10 5G and N1000 which are expected to price in the same affordable price segment, and will make their way to the United States first. The famous leaker Steve Hemmerstoffer of OnLeaks claims that both the smartphones will be launching on October 26 at 8 AM EDT.

OnePlus shared a picture of its logo on the Nord’s Instagram handle with the caption “#ComingSoon” which surely hints that the company is going to launch something imminently. Also, both models have appeared on the OnePlus website last month confirming the existence of these of the N10 5G and N1000. All this pretty much confirms that both the smartphones are coming sooner than ever.

According to various previous reports, the N10 is expected to be Nord but for the western markets. As far as specifications are concerned a report from Android Central claims that, N10 will be featuring a  6.5-inch FHD display with a refresh rate of 90Hz. Whereas under the hood you can expect to find Snapdragon 690 SoC coupled with 6GB of RAM and 128GB of internal storage. Further, it will be having a quad-camera setup at the back consisting of a 64MP main sensor. It is likely to be priced under $400 in the US. 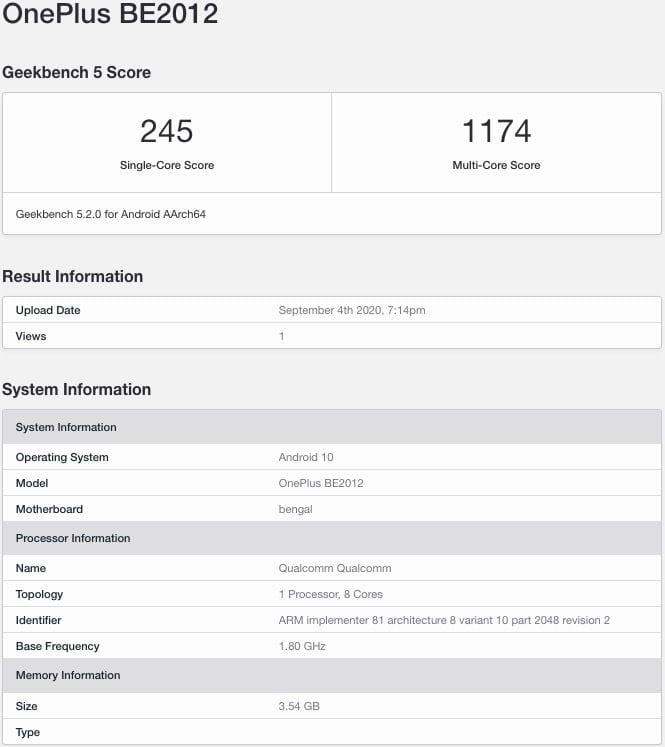 The Nord N100 is well under the wrap as not much is known about it. There are high chances that it could be the budget handset that the company was working on condemned as ‘Clover’. According to rumours, Clover is expected to feature a 6.52-inch display with 720p resolution, Snapdragon 460 SoC coupled with 4GB of RAM, and a triple camera setup at the back including a 13MP primary sensor and a 6000mAH battery. If this turns out to be true, then N100 or Clover might be priced somewhere around the $150-$200 price range.

It seems like N10 5G is a sort of Nord alternative for the western markets which won’t be a hard sell, since Nord is already gained lots of praise. But, on the other hand, with N100 OnePlus is going head to head against brands like Xiaomi and Realme which are well established in the market. So it would be interesting to see how both of these two new Nord smartphones would do in the markets like India, if it launches at all.

Meanwhile, OnePlus is also gearing up for the launch of its upcoming flagship 8T. The OnePlus 8T is scheduled to launch on October 14.