Zen 3 Brings 19% IPC Improvements, Largest for Ryzen in One Generation: Highlights of the Evolution

Zen 3, AMD’s latest CPU architecture, was revealed in the Ryzen 5000 series CPU’s just yesterday, and from AMD’s address, we have a lot of information on the CPU architecture behind these new CPU’s. The Zen 3 is a major leap over the previous Zen 2 architecture in terms of optimisation, which was already a groundbreaking achievement for AMD over their initial step into Ryzen.

The major takeaway from the information communicated in the event is the massive generational leap in Instructions per Clock/Cycle (IPC) from Zen 2 to Zen 3. A whopping 19% of that is quite an achievement for the CPU manufacturer, that too on the same process: the 7-nanometer TSMC process used since 2019 with Zen 2. The IPC uplift promises stronger Performance in single-thread applications, and that includes gaming. 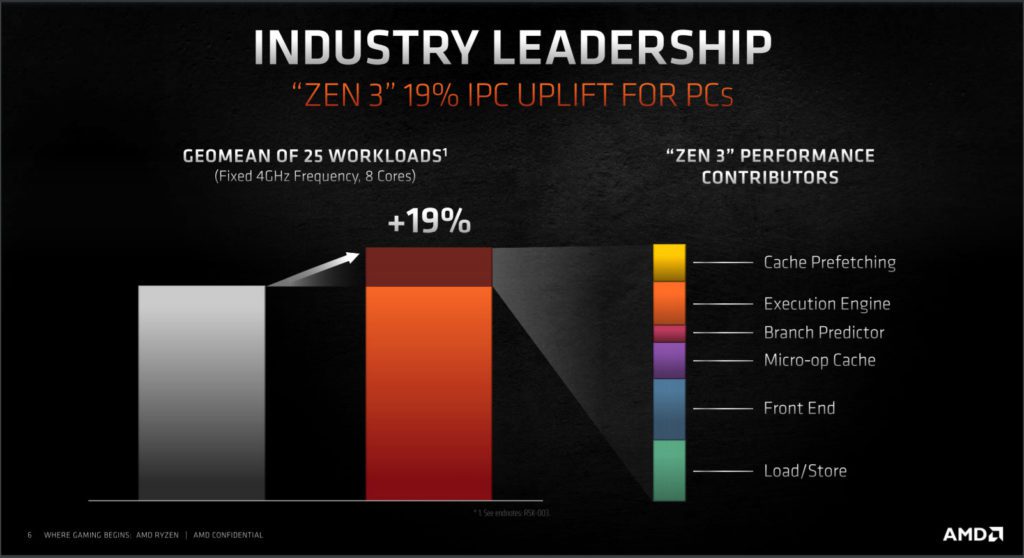 AMD Improves on its core layouts

The new CPU’s have a very different internal design, changing the way the cores and the memory cache are laid out inside the CPU die. The old layout, where AMD used four cores per Core Complex (CCX), and for every four of them, half of the CPU L3 cache is placed to be shared between them. The cores can communicate with the cache and amongst themselves inside the one CCX, which has four cores, while the entire CPU itself may have four, six, eight and up to sixteen cores in multiple CCX’s. 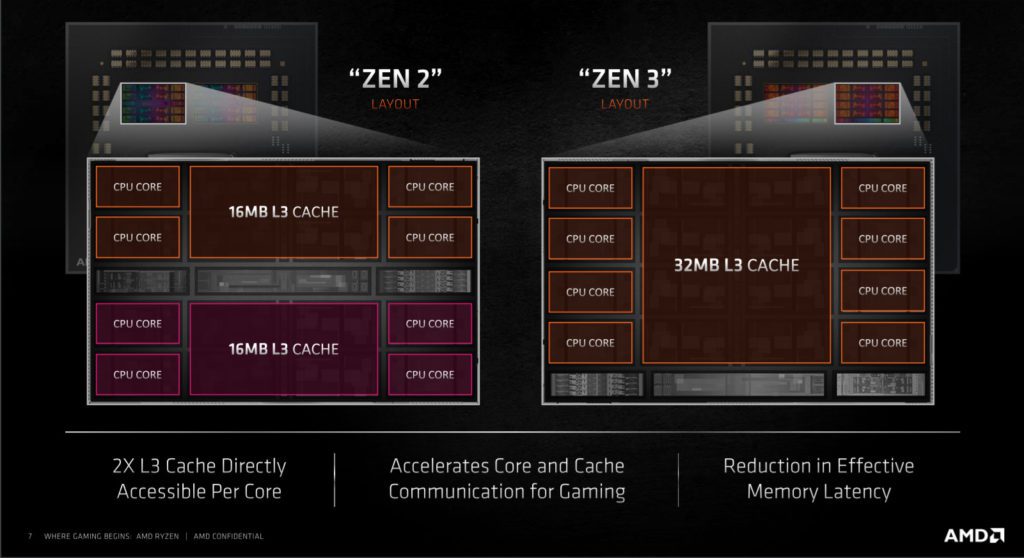 The Zen 3 CPU’s will have a unified cache, accessible to all cores at all times

Zen 3 has done away with the CCX. Instead, we now have a Core Chiplet Die (CCD) as the fundamental unit of abstraction of the CPU. CCD’s used to be on the older Zen CPU’s as well, but they are no longer composed of four-core CCX’s. Now, this will let the cache be shared amongst all cores at once, and every core will have access to double the cache memory at one time. This will mean that there will be a reduction in latency when CPU cores need to work together across CCX’s, as there is no barrier between them and the other cache.

The reason for this chiplet design was important for the past generations, though. That way AMD would only manufacture the same CCX’s for every CPU in that whole series and architecture, and take any faulty yields to use in six-core (two CCX’s, but one has two disabled/non-functioning cores) and quad-core designs (one CCX is the whole CCD). Going away from it does give them a boost in performance, but hopefully, they have the manufacture costs in control for that. And costs they may have:

The new advancements in design and process evolution have made Ryzen finally reach parity with Intel’s well-optimised 14-nanometer process and architectures, making single-core performance finally a slugfest, instead of a one-sided battle. Zen 3 manages to equal and sometimes even exceed Intel’s single-core performance on the top-end, with the Ryzen 5900X getting an 87-point lead over the i9-10900K from Intel, in the Cinebench R20 1T Single-Core test.

However, because Intel is very averse to benchmarks, instead touting their “real-world” performance benefits, AMD had that covered too, showing many games tested with similar peripherals, just different CPU’s (5900X vs. 10900K), and the Zen 3 chip was able to equal and sometimes exceed the performance benchmark of the 10900K, by up to 20% in the best of cases, at 1080p resolution (a CPU-bound measurement in many less graphically intense titles). It may very well be, then, that AMD has the superior gaming CPU in their arsenal, the one thing Intel had the measure of AMD in, since the previous Zen 2 architecture. 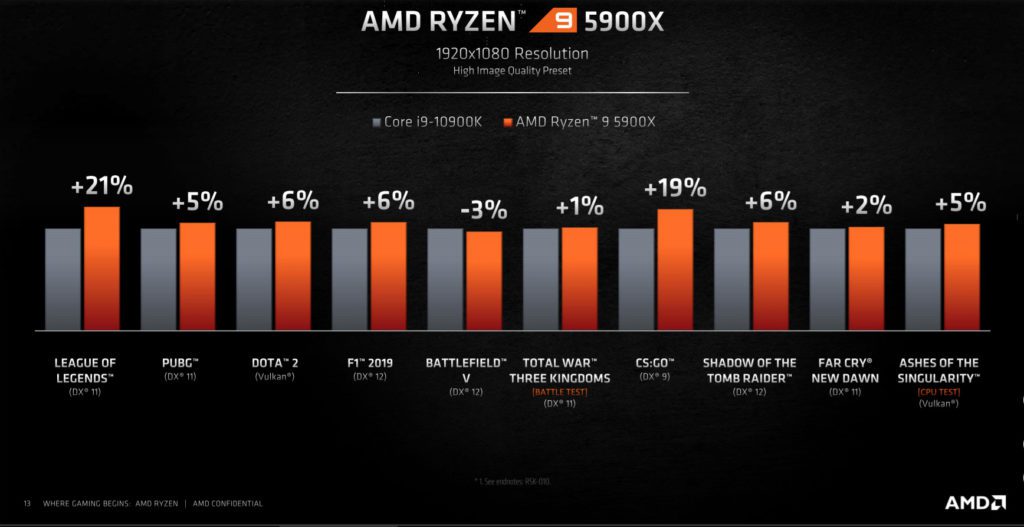 “Real-World” CPU performance of the Ryzen 5900X compared to the 10900K. Equal or better performance in most cases for the Zen 3 part.

This pricing change is clearly because of the non-response from Intel for Zen’s evolution over the past three years. Intel’s lead in performance and their familiarity amongst consumers slipped away with time, and now with Zen 3, AMD is deciding the market’s trajectory as opposed to disrupting it. This lack of competition makes it easy for them to justify the bump in price, while Intel still struggles to evolve past 14 nanometers without further raising the stressed power limits of their platform.

Power Questions: Does Zen 3 Hog it?

Power limits, defined by TDP (or Thermal Design Power) is roughly the maximum power drawn by the CPU from the power supply. For a consumer CPU, the TDP needs to be controlled to a limit to allow for easier cooling and fewer noise levels while cooling. This power ceiling has been maintained from Zen 2 by the new Ryzen 5000 CPU’s running the Zen 3 architecture, thereby causing a leap in the performance-per-watt offered by them, an important measure of value. 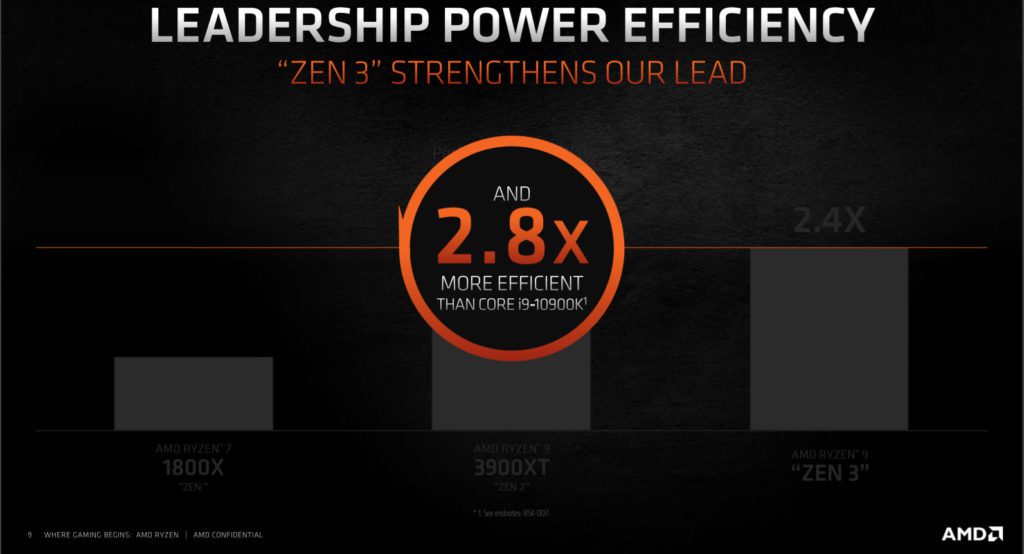 The Zen 3 architecture boasts a 2.8 times higher performance per watt over the i9-10900K from Intel. AMD tested the CPUs on two identical systems, running on full load under Cinebench R20 nT (multi-core test).

Competing with the i9-10900K in the Cinebench R20 Multi-Core test, the performance-per-watt of the Ryzen 5950X is around 2.8 times that of the Intel CPU, a great value proposition for AMD. Intel has had to increase the maximum TDP of their consumer CPU socket, as well as change the socket itself to allow for generation evolution with each new series of CPUs.

AMD has boasted that their new chips are “the fastest gaming CPU’s in the world”. This claim may very well be true, but we will hold it there, for the benchmarks to arrive as we wait for the global launch of the CPU’s on the 5th of November. Meanwhile, we may get more insight into the Zen 3 architecture itself, so do watch this space for that, as well as reviews on the new CPUs as they are launched.

Zen 3 Brings 19% IPC Improvements, Largest for Ryzen in One Generation: Highlights of the Evolution