After weeks and weeks of testing, Google is finally rolling out Android’s AirDrop like Nearby Share feature. It will (finally!) be easier to share files, images, videos, links, and other content between Android devices. The feature is rolling out on all devices that run Android 6+ and will be available on all the devices in the next few weeks. Here’s how you can get it before everyone else gets it.

The feature is pretty easy to use, to be honest. The first time when you set it up, it will ask you to set the visibility settings, which can be changed later in the settings.

Once you have it all set up (on both the devices that you want to share content between), and you find a thing to share, just tap on the share button and select Nearby Share. It will ask you to turn on your Bluetooth if it’s turned off, and then you’ll be able to see all the contacts that can accept the file via Nearby Share. Once you select the receiver, they will be notified with the option to either accept or decline the file.

The feature works both online and offline and was built with privacy in mind, as per Google. It automatically chooses the best protocol available, out of Bluetooth, Bluetooth Low Energy, WebRTC, or peer-to-peer WiFi, for the transfer.

How Do I Get It Right Now? 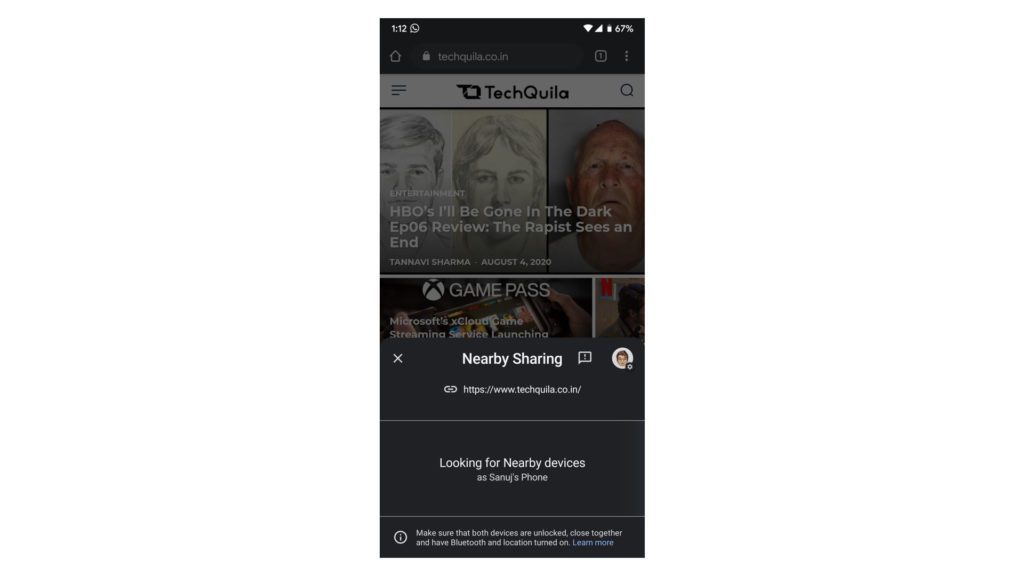 Also Read: Google One Will Now Offer Backup on Android and iOS Devices For Free!

This post first appeared on TechQuila, please read the originial post: here
People also like
Canadian Online Casinos at its Best
Urban, Suburban, or Rural Practice: Pros and Cons
Review: ‘Mr Luck-Ronnie Wood And The Ronnie Wood Band A Tribute to Jimmy Reed: Live at the Royal Albert Hall’
Easy Pizza Pinwheels Kids Love
Most Beautiful Mountain Lakes in Switzerland You Can Easily Reach
YouTube Videos To Be Processed Much Faster With Custom Google Chip
6 Work-From-Home Essentials That Will Enhance Your Productivity