Is Planet 9 Actually A Black Hole? A New Telescope Could Have An Answer

Black holes and their surrounding enigma have resulted in them being an area of research for decades now. According to the latest theories, Planet 9 – the hypothetical 9th planet of our solar system, was likely captured by our solar system at some point over its 4.6 billion-year-old history.

Shirogorov Quantum
Deck Out Your Backyard: Landscape Des…
Pineapple juice benefits for skin
How to Build a Sustainable Wealthy Fu…
MICHELLE MONE IS A THIEF

In a new study, astronomers have devised a plan to find black holes in the outer solar system using the Legacy Survey of Space and Time (LSST) mission. With the help of this mission, the team believes that the true nature of the hypothesized Planet Nine could be revealed.

Over the past few years, researchers have noticed an odd clustering in the orbits of multiple trans-Neptunian objects (TNOs), which dwell in the dark depths of the far outer solar system.

This big “perturber,” if it exists, might be a planet — the so-called “Planet 9,” or “Planet X” or “Planet Next” for those who will always regard Pluto as the ninth planet. However, there’s another possibility as well: The shepherding object maybe a black hole, one that can cram all that mass into a sphere the size of a grapefruit.

Harvard University astronomers have raised the possibility that orbital evidence from Planet 9 could possibly be the result of a missing link in the decades-long puzzle of dark matter – A hypothetical Primordial Black Hole (PBH) with a horizon size no larger than a grapefruit, and with a mass 5 to 10 times that of Earth. 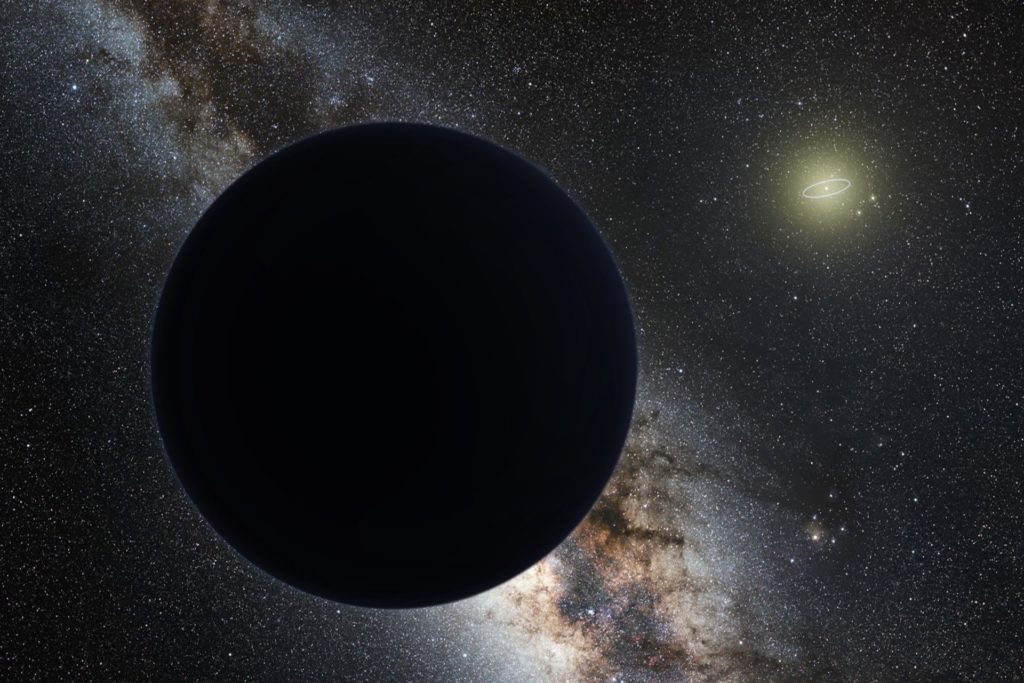 A unique wide-field survey telescope, now under construction in Chile, will soon allow astronomers to study more on the possibility that Planet 9 may indeed be a PBH instead of just an ordinary planet. If they exist, such PBHs would require new physics and would go a long way towards solving the mystery of the universe’s missing mass, or dark matter. The idea was suggested by The Astrophysical Journal Letters.

“Our paper shows that if Planet 9 is a black hole, then comets residing in the outskirts of the Solar system (in the “Oort cloud”) would impact it”, Avi Loeb, Chair of Harvard University’s Department of Astronomy and the paper’s co-author, said.

“They would then be destroyed by its strong gravitational tide and within a second of accreting onto the black hole would produce a visible flare“, Author of The Astrophysical Journal Letter said.

“The idea is that once in the vicinity of a black hole, small cometary bodies would melt as a result of heating from the background accretion of gas from the interstellar medium onto the black hole”, Amir Siraj, the paper’s first author, and a Harvard University undergraduate, noted in a statement.

The authors calculate that they would be capable of detecting the first such accretion flare within a few months of the LSST’s operation which is now slated for first light in 2021.

“LSST’s ability to survey the sky twice per week is extremely valuable. In addition, its unprecedented depth will allow for the detection of flares resulting from relatively small impactors, which are more frequent than large ones,” said Amir Siraj.

Is Planet 9 Actually A Black Hole? A New Telescope Could Have An Answer