The Clearing is a 2020 horror (?) Movie directed by David Matalon and starring Liam McIntyre, Aundrea Smith and Steven Swadling in pivotal roles.

This movie takes place in the midst of a zombie apocalypse. I, personally, really love movies which feature Zombies. They’re usually amazing, fun and feature a lot of gore – which I thoroughly enjoy. I mean, I shouldn’t really reveal to the world my thirst for blood and gore, but here we are.

However, The Clearing is one of those zombie movies that will make you want to slap yourself. Don’t ask me why.

The Clearing starts off without leaving much to the imagination. The first scene is of Tom trying to fight off a horde of zombies standing on top of his motorhome. We then cut a few days earlier, and we see that Tom doesn’t have the best of relationships with his daughter, Mira. His wife Naomi suggests him to take her camping, and after some persuasion, the two set off for a weekend of fun. However, Mira doesn’t feel the same about the trip and is cold towards her father. Before some of the conflicts can be addressed, the zombies come into the picture, the pair is separated and Tom must fight for his life to save his daughter.

The entire movie takes place on top, or inside, the motorhome. Which is a great way to save some budget, but it also makes it ten times more difficult to create tension. And that is exactly what is wrong with The Clearing. For a zombie movie, it is so boring. After the first five minutes, there’s absolutely nothing going for it. Tom makes mistake after mistake, although he is a self-professed survivalist or something, and the zombies are embarrassing to look at.

So, about the zombies. The Clearing has some of the tamest zombies I have ever seen in movies. There is little to no difference in their body, other than some bruises and such and they just run around like Walter in Get Out. Zombies don’t work like that, specifically because they don’t have much of a brain.

For the uninformed, this is the scene from Get Out.

It’s also very frustrating to see that the movie portrays the zombies as brainless in one scene, and then super smart in the other. So, towards the end of the movie, as Tom is standing in his motorhome, a zombie sneaks in and tries to bite/eat him from behind. Yes, it sneaks in. Zombies don’t sneak, because they don’t have the smarts to think like that. But yeah, whatever. However, if the zombie has the brain to sneak up on people, why would they just forget that Tom is in his motorhome (that happens a lot, for no reason)?

However, one of the biggest problems I have with The Clearing is that the zombies forget how to bite the moment they see Tom. That man should’ve been bitten in the first second of the movie, if he were in, say, World War Z or Zombieland. But not in The Clearing. In this movie, it felt like the undead just wanted him in their arms for a gentle caress. They had him IN THEIR ARMS, several times, and yet he got away. I don’t know why this happened, and the movie doesn’t tell us either. Oh, and also, the zombies are also adept at hand-to-hand combat, but somehow can’t open car doors.

The Clearing also has this weird thing where it shows Tom getting progressively sicker as the movie progressed, but at the fag end, he just seemed fine? I mean, he had blood coming out of his mouth, but I guess. Yeah, it’s fine, they were done with that plot.

Tom is a disappointment 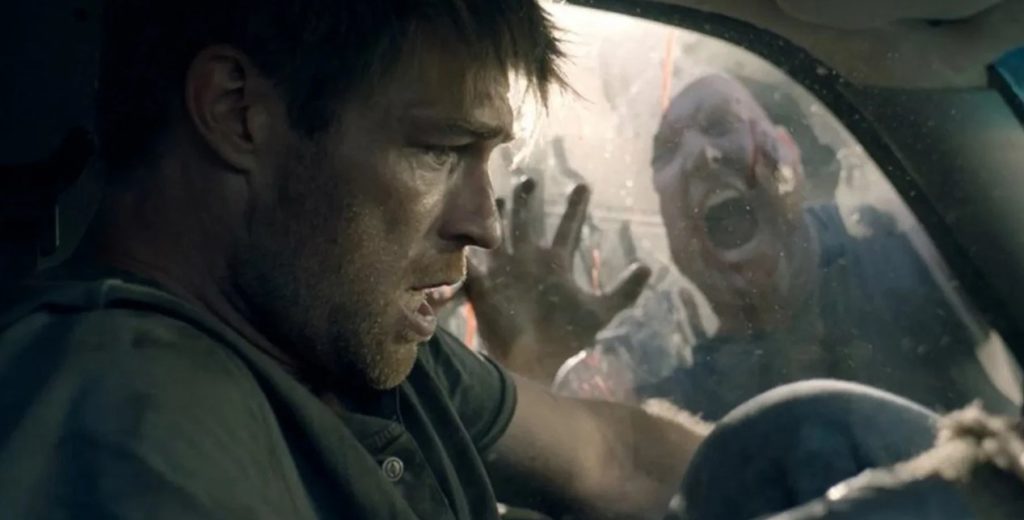 The Clearing’s central and main character is Tom, who is annoying on another tangent. I would go out on a limb and say that the zombies are even better than him. First of all, he would rather spend his time with his buddies than with his daughter, but doesn’t spare a moment to insult her interests. He also supremely overestimates his abilities – he tried to fight off around 20+ zombies with a small handgun with five bullets. And then obviously runs inside and cries. The man had ample opportunities to run away from the situation, but he chose to run inside the motorhome, instead of running away and hiding somewhere outside.

The movie didn’t give us any other characters to even consider liking. Although Mira is a likeable character, she didn’t have much of a screen-time for me to enjoy her presence.

There’s also a ranger character, who’s in the movie for some reason? I mean, he just comes in, shouts a bit, and then dies. On top of that, he was annoying. Sheesh.

Summing up: The Clearing

We never really did get to know what the infection was all about in The Clearing. One fine morning there were some zombies, so yeah. There’s that, deal with it. The story lacked any and all horror elements, and the acting was passable at best. Although it was somewhat of a good-looking film, without some solid scares, that will take you only so far. Definitely give this one a skip, go watch some Netflix instead.

So, that brings me to the only question that I asked myself at the end of The Clearing: what will you do if your crush becomes a zombie and tries to eat you?

This post first appeared on TechQuila, please read the originial post: here
People also like
Hollywood Dentist Providing Red Carpet Smiles
Tips for Getting Your Backyard Ready for a Late-Fall Party
5 Unusual Phenomena That Video Technology Has Given Us
Know 7 Most Translated Texts in the World- you’ll be Shocked
Best PS5 Games Deals and Offers with massive discounts
Chloe Grace Moretz Looked Incredible at “The Peripheral” Special Screening
What To Watch When You Need A Mood Booster: 10 Shows
Pool Cleaner / Vampire Slayer – Day Shift on NetFlix
Roald Dahl book made into a Spielberg movie
35 Actors With Beards (Best & Worst Celebrity Beards)
The Only Lower Ab Workout You’ll Ever Need for V-Cut Abs, According to Science
Afghan Pilot Who Bombed the Taliban Now Flying Recon to Combat US Wildfires
Night of Terps With Degenerate Art Gallery, Indux Labs And Friends: A Hash And Glass Collector's Dream