Bomb Queen is Finally Back in Bomb Queen: Trump Card

Rated as ‘very mature’ (mind it!), the fan-favourite series Bomb Queen is returning, after eight years, with a brand-new four-issue miniseries in Bomb Queen: Trump Card by Jimmie Robinson (Five Weapons, The Empty). The explosive satire will launch this August from Image/Shadowline.

The Queen is a villainess who has eliminated and subsequently banned all superheroes from the fictional city of New Port City. This new chapter in the series promises the kind of irreverent, twisted fun longtime fans of the character have come to expect — in other words, it’s pretty much guaranteed to offend everyone, especially if you’re a Trump fan!

“I returned to Bomb Queen to get a few things off my chest,” said Robinson. “From social politics to the state of the comic industry, nothing is safe from the Queen of obscene. Sometimes the best medicine is bitter and hard to swallow, and considering the current state of things, it seemed the perfect time for her to return to add to the chaos!” 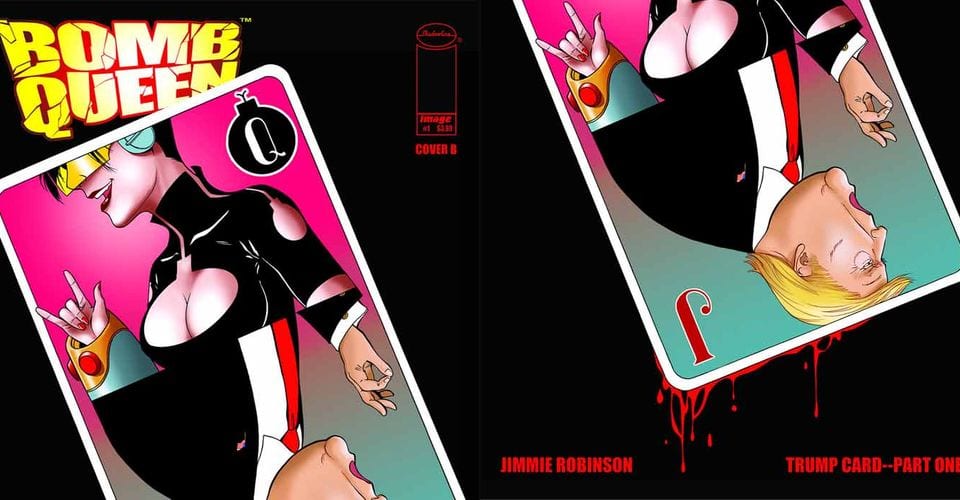 Set in the year 2024, Bomb Queen: Trump Card follows supervillain Bomb Queen on her quest to stop Donald Trump from becoming president for life (how we wish this was true!) Her plan: a campaign against Trump, steal his voter base, and lay bare America’s dark underbelly in the process.

Bomb Queen: Trump Card #1 (Diamond Code JUN200030) will be available at comic book shops on Wednesday, August 26, 2020. The edition will also be available for purchase across many digital platforms making it easy to access for fans, including Amazon Kindle, Apple Books, comiXology, and Google Play.

The announcement has made a huge buzz amongst the fans of Bomb Queen and while you probably still won’t get the Comic-Con, it looks like it is finally a good 2020 for all you comic book fans out there.

The post Bomb Queen is Finally Back in Bomb Queen: Trump Card appeared first on TechQuila.

This post first appeared on TechQuila, please read the originial post: here
People also like
Burrow Has The Perfect Pillow For Every Person In Your House
Easy Pet Rocks Craft Idea For Kids
Review: Troy Redfern ‘The Fire Cosmic’
REER Les cuillères colorées à manche antidérapant couverts...
18+ Adult Movies Of All Time To Fulfill All Your Sexual Fantasies| Lolita, Exotica and More
How to Get Rid of Ants
Maximizing Your Shadowing Experience
Blackjack Variants From Around the World

Bomb Queen is Finally Back in Bomb Queen: Trump Card