It comes down to one question,
Will you survive highschool?

The 13 Reasons Why franchise has finally ended the series after four long years of showing teen suicide, sexual assault, gun violence, homophobia, drug abuse, and mental health amongst teenagers. On Friday, 13 Reasons Why Season 4 debuted its final 10 episodes, providing closure to Clay Jensen and friends from everything they had been hiding since Hannah’s death in season 1. The opening moments of season 4 make it clear that there’s no light without loss at the end of the tunnel since it seems very much like another student is dead. Honestly, its… too much!

Season 3 of 13 Reasons Why ended with the murder/cover-up of Bryce Walker by Clay Jensen and friends by framing Monty for the crime, who is eventually murdered in prison. The new season is structured around Clay and his trauma, along with the struggles of his friends. He suffers from anxiety, depression, and delusion. He is seen drowning in guilt and sees no way out of it. The season is set in flashback from 6 months earlier and another Liberty High teen is dead. Clay often sees Bryce and Monty, they are constantly in his head. They haunt him.

He finds himself guilty for everyone’s pain which he didn’t even cause. After the starting scene of a funeral service of some Liberty High student, the audience is taken back to when Justin is fresh out of rehab and seemingly on an upswing. However, it soon became clear he is still struggling. The whole struggle of Clay is symbolic of the kind of society and environment the generations have made for kids and how it affects them. Clay ends up in a psychic ward after a practice drill at school. Throughout, his mental health is seen on the edge, waiting for a little nudge to jump and hurt him. Clay seeks therapy but for the initial episodes, it just doesn’t seem to help as Clay wasn’t really ready to open up and seek help. 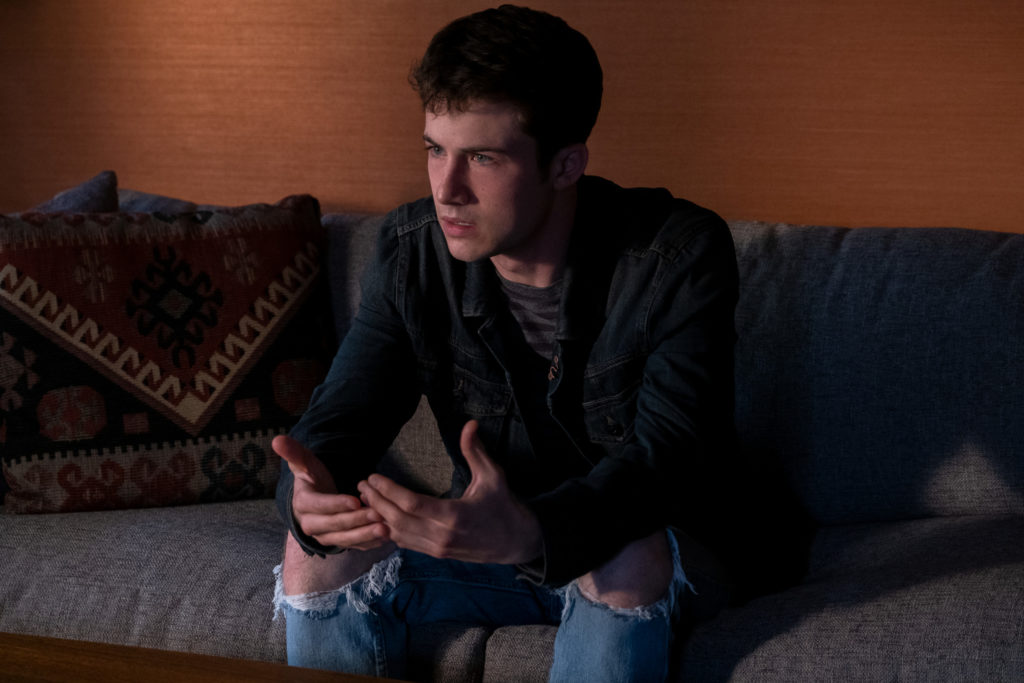 Dylan Minnette as Clay Jensen in 13 Reasons Why

I have always admired Clay’s character for being an amazing friends, a good person and a good son but season 4 for Clay is as hard and emotionally draining as it is for the viewers.

The 13 Reasons Why Season 4 trailer came with a lot of hope about bringing the truth into light, once and for all, in front of the whole of Liberty High. But the series surprisingly did not bring anything new or extremely surprising into the light. It did not expose Clay and friends but talked about other things like Monty’s and Winston’s relationship, Clay’s mental health, Alex’s sexuality, and various other things and issues in small parts. 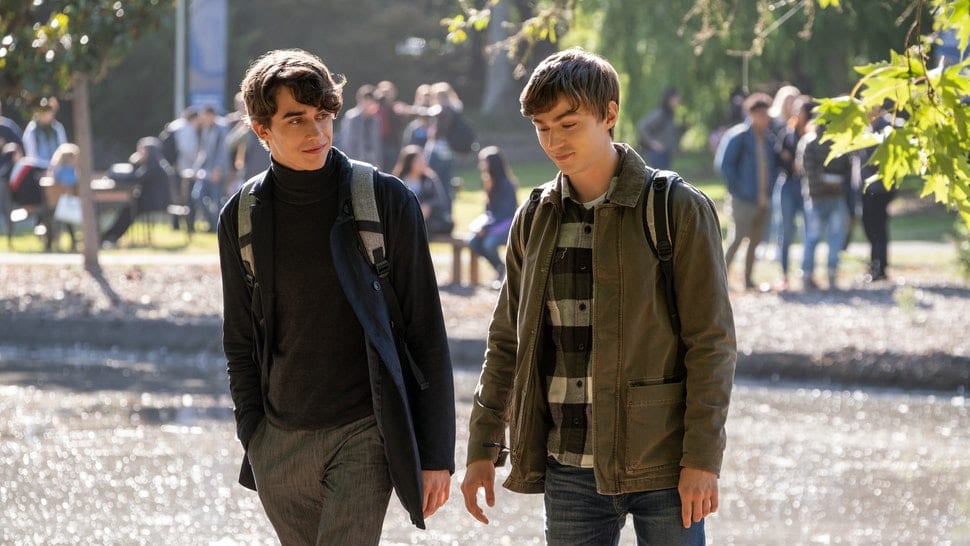 Like many viewers, I believed that his season would be a dead-end for Clay and friends but on the contrary, the series ended with all the friends graduating from Liberty High (some positivity) after months of struggles and fights to keep themselves from falling apart. The addition of Winston, Monty’s ex-lover who is determined to expose these friends is the best addition in the season so far.

Winston and Alex develop a relationship over time which ends due to Winston hiding about Monty and him. The relationship which was oo beautifully scripted saw an abrupt and, to be honest, weird end. The one which doesn’t leave the viewers satisfied.

Who Did They Lose?

Justin Foley, who was adopted by the Jensen family in the earlier season, was now on the way to becoming a better person – he managed to get himself into a college. He goes to rehab to get rid of his addiction but relapses. He appears increasingly sickly and disheveled. On the night of the Senior Prom, he’s in bed and sweating but he claims it’s just the Flu. But Justin rallies enough strength to show up to prom and reconcile with his love Jessica Devis (Alisha Bao) as they share a romantic moment, Justin tells her “I love you more than life,” to which Jess says “Don’t love anything more than life.” And a few moments later, Justin collapses in the middle of the dance floor. What even would 13 Reasons Why be without causing pain to the viewers and characters.

If you thought that Justin overdosed and it’s going to be fine soon, well, it’s worse than we all anticipated. Likely due to his history of IV drug use and sex work, he contracted HIV. Since it went undiagnosed, Justin has AIDS due to which he has severe pneumonia and meningitis. His symptoms are so advanced that there’s not much the doctors can do besides make him comfortable. 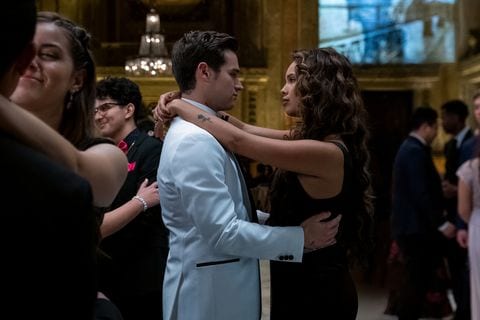 Soon, Justin dies leaving his loved ones shattered. In his last conversation with Jess, Justin tells her that he ruined her life. She, however, tells him that he taught her what love is. The conversation shattered my heart. So did the scene where Justin holds Clay’s hands and then the former flatlines. It’s a painful moment to watch. The finale is upsetting and heart wrenching. It is difficult to make it through without shedding tears.

The last episode sees Liberty High students graduating. Clay’s graduation speech about the things that make life worth living is legitimately moving. It’s beautiful and shows how much he has evolved and grown as a person.

After the graduation ceremony, Clay and his friends go and bury the cassette tapes Hannah left behind after her death, effectively putting to rest the reason the show existed in the first place. As the tapes are being buried, Jessica is confronted by the ghost of Bryce (Justin Prentice). As an arrogant Bryce says he feels like he won, even in death, Jessica disagrees and proclaims that the only thing Bryce was responsible for was bringing this group together in their trauma. “We have to love each other at the end of it all. You did that,” she tells him. 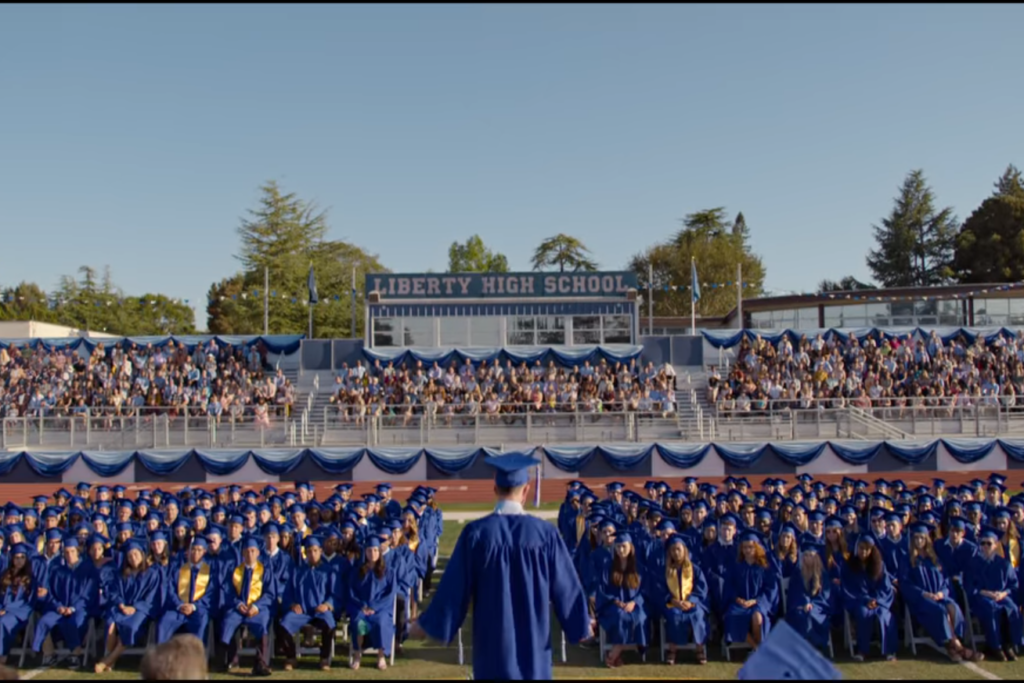 Clay sees Justin’s ghost after the ceremony which suggests Clays loves for Justin and how he wants him to be there, he says, “How am I supposed to do it without you?” But Clay has to once again deal with losing someone he loved, just like Hannah in season 1. Clay also sees Hannah, in the same dress she wore to prom with him. Clay finally says goodbye to all the pain to move on with his life.

13 Reasons Why Season 4 ends with Clay saying goodbye to his family and heading with Tony (Christian Navarro) on a road trip before they finally go to college. The final shot is of Clay and Tony sitting together in silence in the front seat of Tony’s car with the windows rolled down.

The question it has left me with is – Did the show really need to end on such a devastating loss? For Justin, of all people — after the terrible upbringing he came from and all the hurdles he overcame — to die like this, in pain. It brought an unnecessarily bleak and brutal ending to one of the most amazing characters. But again, the whole point of the series tends to be leaving people in pain.

If you have been following 13 Reasons Why since the beginning, then this is the closure you need and not need at the same time. But if you’re up for some tears and pain, this is it. The addition of Winston is beautiful and adds new angles to the character’s life and attitude. Everything around changes them in some way or the other and maybe it’s not the end of pain for Clay and friends.

13 Reasons Why Season 4 is now streaming on Netflix.