In a recent press release, the European Space Agency released the news of our planet’s weakened Magnetic Field. Swarm constellation, a cluster of satellites stretching from Africa to South America, detected a decrease in the magnitude of the Earth’s magnetic field. It is generated in the fluid outer core by a self-exciting dynamo process.

Electrical currents flowing in the slowly moving molten iron generate the magnetic field. Slight changes in its amplitude can have diverse implications. This ever-adapting and sophisticated force shields the planet from cosmic radiation and the Sun’s noxious charged particles. It also affects the nearby satellites and spacecraft, which can prove to be detrimental.

The European Space Agency (ESA) launched a new satellite mission called Swarm on 22nd November 2013. The mission consists of three identical satellites which can measure the strength and direction of Earth’s magnetic field to new levels of precision. A global decrease of 9% in the magnetic field’s force has been observed over the last 200 years. 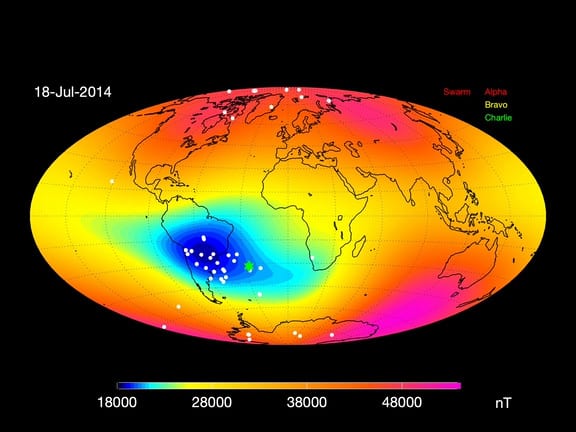 Before. Area shaded in blue is the South Atlantic Anomaly, white dots show the reductions in the magnetic field as detected by the Swarm constellation 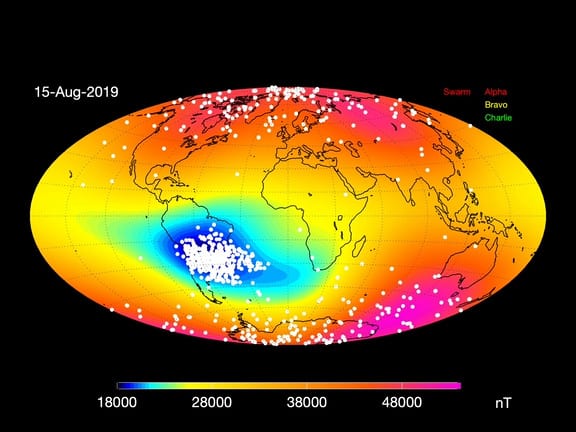 After. The SAA has expanded, increased detections by the satellites.

“The new, eastern minimum of the South Atlantic Anomaly has appeared over the last decade and in recent years is developing vigorously. We are very lucky to have the Swarm satellites in orbit to investigate the development of the South Atlantic Anomaly. The challenge now is to understand the processes in Earth’s core driving these changes.”, said Jürgen Matzka, from the German Research Centre for Geosciences (more on the press release here).

Geomagnetic Reversal is the foremost explanation on the incident. It is when the north and the south pole switch places. The last pole reversal took place 780,000 years ago. According to the scientists at ESA, we are long overdue as this phenomenon takes place every 250,00 years or so. Despite the implications, the data collected from the Swarm constellation has provided rather captivating insights about the Earth’s inner workings.