The Birth Of A Planet Captured By The Very Large Telescope

For the first time ever, earthlings might have witnessed the birth of a Planet. The Very Large Telescope (yes, that is the name of the telescope) facility operated by the European Southern Observatory on Cerro Paranal in the Atacama Desert of northern Chile recently spotted a huge swirl of gas 520 light-years away from earth. The humongous disk of gas was seen to be circling the star AB Aurigae. Having a mass 2.4 times as that of our sun, AB is a Herbig Ae star in the Auriga constellation.

Planets form due to the clumping of molten rock and metal along with dust and gas. What was observed, was a huge disk of condensed gas and dust around the newly formed star. The spiral arrangement of miscellaneous substances with a shape resembling an ‘S’ in the centre, is usually the theoretical marker for the formation of a planet.

However, this remained theoretical as we had never witnessed the creation of a planet before. This little incident might have confirmed some of our pre-existing notions and postulates, keyword being ‘might’ as there is a good chance that this may have been the formation of another celestial body, like a brown dwarf star. Nevertheless, it is still a very exciting event to have chanced upon in the cosmology world. 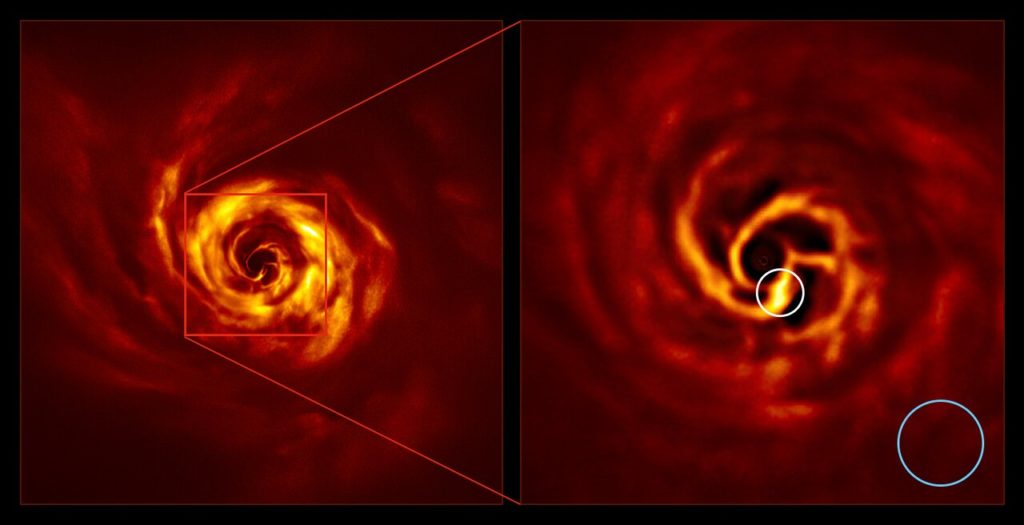 The images of the AB Aurigae system showing the disc around it. The image on the right is a zoomed-in version of the area indicated by a red square on the image on the left. It shows the inner region of the disc, including the very-bright-yellow ‘twist’ (circled in white) that scientists believe marks the spot where a planet is forming.

According to Anthony Boccaletti, an astronomer at the Paris Observatory, a “twist” pattern of gas and dust in the spiral structure marking indicated the region where the planet was coalescing.

“It was amazing. It was exactly as we were expecting from the theoretical predictions of planet formation,” said Emmanuel Di Folco, an astrophysicist at the University of Bordeaux, ecstatic spectating the astronomical event.

Dr Boccaleti also remarked that the planet is likely to be a gas giant like Jupiter, rather than a planet with a lot of tangible mass like ours. This was due to the large waves created in the gaseous disk, characteristic of gas planets. It’s also speculated that this foetus might not be alone, hints of another planet were observed along the edges of the gaseous frisbee (more info in the press release here).

In order for more in detail observation, the European Space Observatory (ESO) has undertaken the construction of the Extremely Large telescope. As Boccaletti explains, this powerful telescope will allow astronomers to get even more detailed views of planets in the making.

“We should be able to see directly and more precisely how the dynamics of the gas contributes to the formation of planets,” he concludes. ESO’s wicked cool cosmological capabilities aside, they seem to have cracked the code for naming telescopes. The Extremely Large Telescope provides opportunities for potentially ground-breaking deep space exploration. Exploration which could decide mankind’s intergalactic fate.

The post The Birth Of A Planet Captured By The Very Large Telescope appeared first on TechQuila.

The Birth Of A Planet Captured By The Very Large Telescope