Amazon’s Blow the Man Down: Do You Really Know Your Loved Ones?

Blow the Man Down is a 2020 thriller that’s dark and dreary. It is also a movie which has a predominantly woman-centric cast. The film had its world premiere in the Tribeca Film Festival, 2019, and was released March 20 this year on Amazon Prime Video.

Now, I’ve said it before, and I’ll say it again. Thrillers and/or horrors don’t need jump-scares. I am a fan of slow-burns, films that take its time to dish out the scares. However, every moment of this movie is filled with this sense of dread, like, if you turn this corner, there’s someone waiting for you whom you don’t want to meet.

This movie does exactly that.

A death in the town

Blow the Man Down starts off with a scene of assault – a man chases a woman down the snow and tackles her while a woman watches from the window of a house.

We cut to Priscilla and Mary Beth Connolly, who live in the small port town of Easter Cove, Maine. Their mother just died and it’s a terrible time for them both. However, as small towns tend to go, her mother’s friends are all there for her to get the duo through. It’s kind of a heart-warming moment, considering how affectionate the three are to them. They have all lost someone close to them – and it’s evident when the three women reminisce about their departed friend.

However, all is not well. And this fond, albeit sad, time is cut short when Mary Beth, the younger of the two sisters, gets to know that they are going to lose their house.

One mistake too many 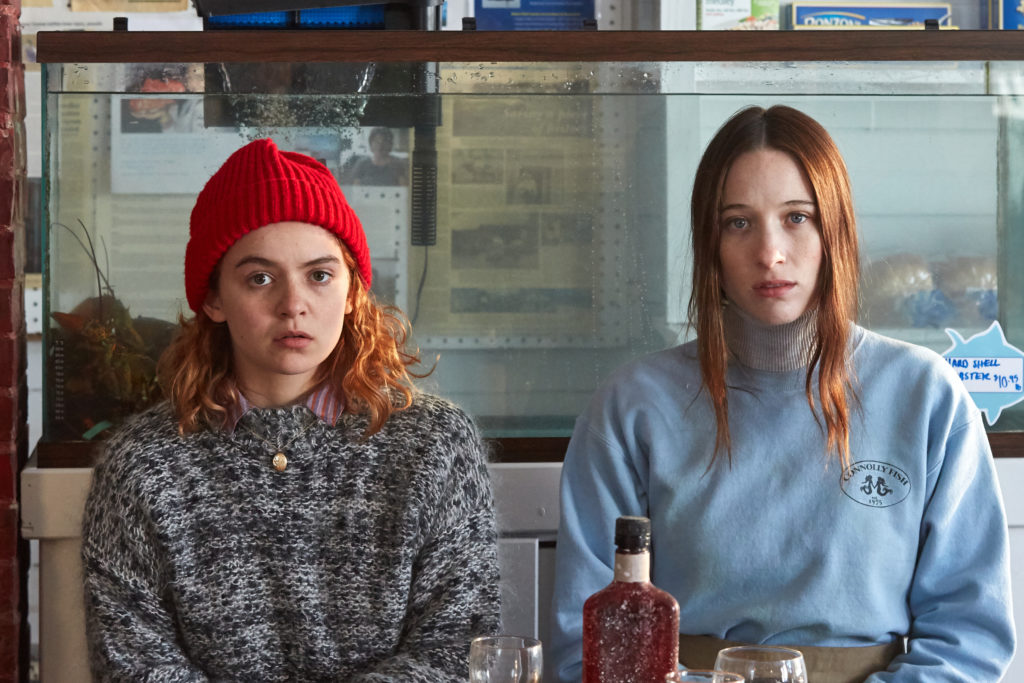 The revelation makes her angry, especially because Priscilla didn’t tell her anything. She leaves to drown her sorrow in a pub where she meets Gorski. One thing leads to another and in a drunken haze, Mary Beth Kills Gorski. This is where things start to go down for the sisters in Blow the Man Down.

Being the older sister, Priscilla tries to get rid of the evidence, but alas leaves her knife behind in the process. It’s an absolute mess. However, there are scenes in this horrible tragedy which has moments of humour. The fact that Mary Beth kills Gorski with a harpoon (of all things) and Priscilla’s disbelief after hearing it made me laugh, surprisingly. 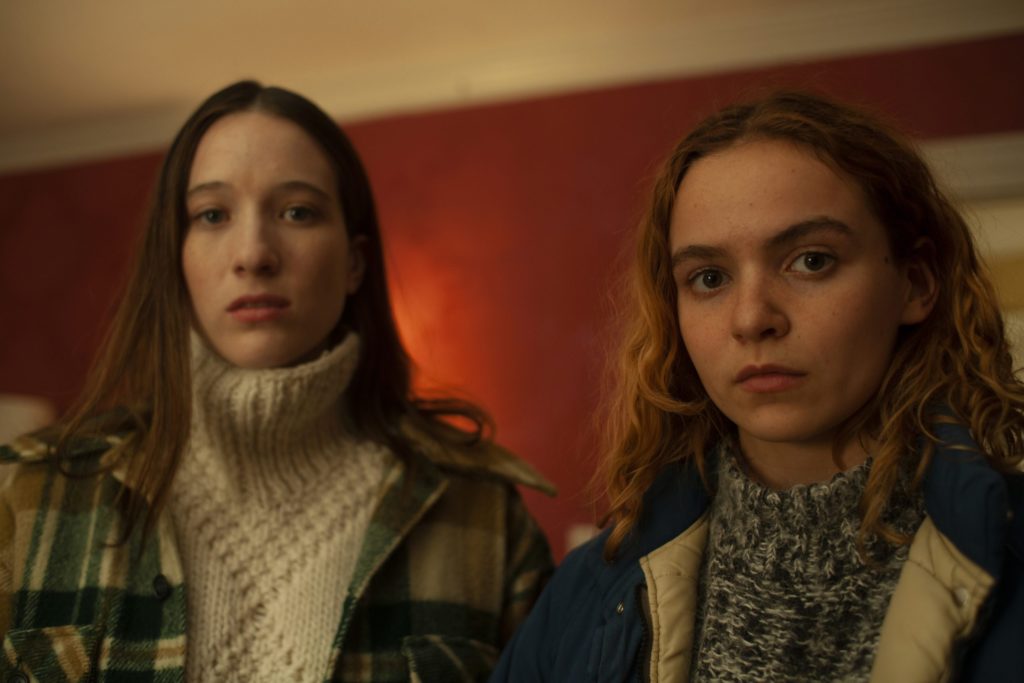 The whole movie is focused on ambiguity. There’s no good or bad person here. People whom you think to be great, end up cutting people open. But that doesn’t necessarily make them terrible people. It’s a reflection of what people will do when pushed to the edge and how much people are willing to sacrifice to save their loved ones. Human beings are grey – and there’s no point in thinking otherwise. 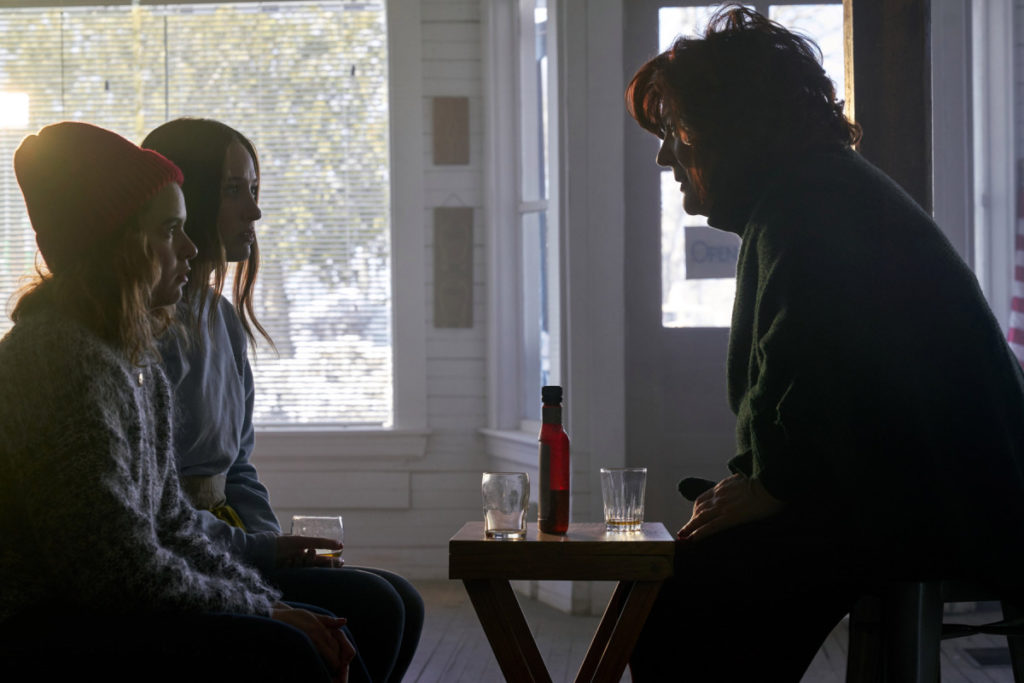 Priscilla and Mary Beth with Enid

Now, the strings I was talking about previously, there’s one string that is longer than the rest. And that’s Margo Martindale’s Enid. She runs a brothel in the town and people are not happy with it, especially her (ex) friends Susie, Gail and Doreen. However, the men seem to be oblivious to the problems that are prevalent in the town due to Enid’s business.

Things come to a head in Blow the Man Down when one of the girls turns up dead. Susie and the others are sympathetic and ask Enid to close the brothel down. However, Enid refuses. it’s sad when you realise the woman doesn’t give a damn about anyone around her. That is made apparent when she asks the Connolly sisters to start working for her – even though their mother was one of her best friends. Margo Martindale is splendid as Enid. I hated her character with every fibre of my being – and that says a lot about how well Margo portrays her. 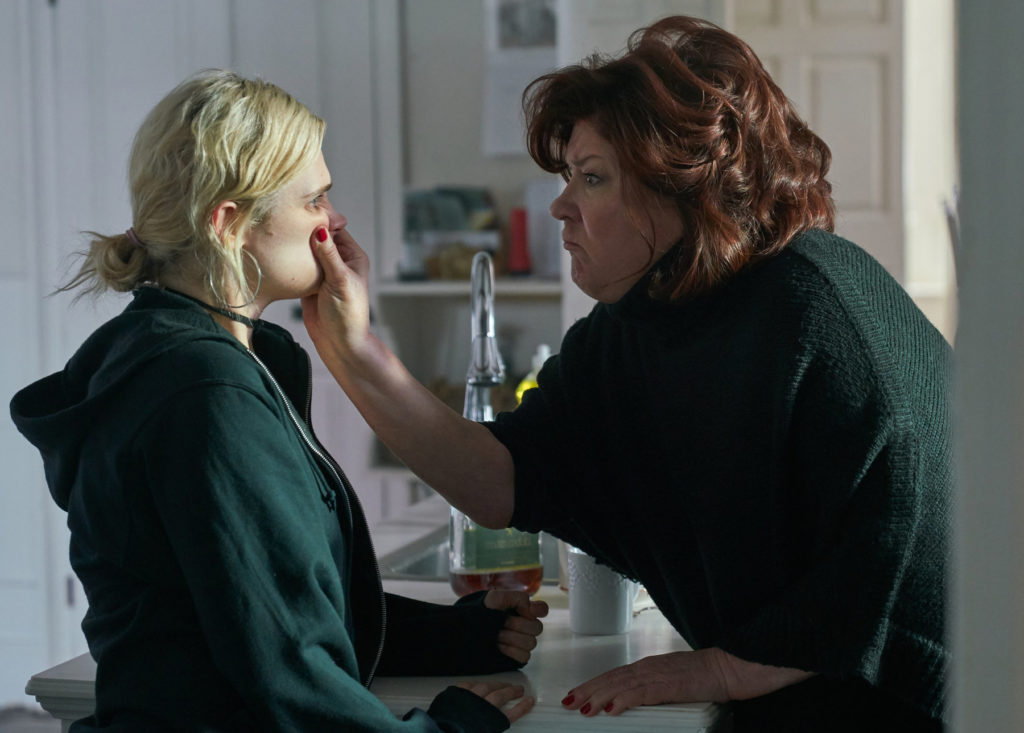 Blow the Man Down climaxes with Enid’s death. No one gets to know about what the Connolly sisters have done, save for Susie, Gail, Doreen and Justin. The last scene is probably one of my most favourite scenes in a movie ever. It shows how much family and friends matter in your life and how they will be with you through thick and thin.

And also that women get shit done.

Blow the Man Down is an entertaining watch on Amazon Prime if you’re at home in isolation, as most of us are. I do agree that the strings could have been tied a wee bit tighter, but I don’t have any major problems with the story. The acting is brilliant and the eeriness of Easter Cove, Maine, is evident from the first scene. There’s a lot of secrets to uncover in the movie – as small towns usually do.

Blow the Man Down is streaming on Amazon Prime Video.

The post Amazon’s Blow the Man Down: Do You Really Know Your Loved Ones? appeared first on TechQuila.

Amazon’s Blow the Man Down: Do You Really Know Your Loved Ones?