Xiaomi has today launched the Mi Box 4K besides the Mi 10 and the Mi Wireless Earphones 2. It is essentially an Android TV-powered box which aims at converting a regular TV into a smart one by providing some extra functionalities and services. The device gives users access to a plethora of apps and services including streaming from popular OTT (Over The Top) platforms like Netflix, Disney+ Hotstar, Amazon Prime Video and more.

The Mi Box 4K, unlike the Amazon Fire TV Stick, is designed to be placed on a TV peripherals mount and connects to the TV via the HDMI cable. As the name suggests, the IoT (Internet of Things) device is capable of streaming in 4K resolution. Moreover, it also supports HDR 10, Dolby Audio, and DTS for an immersive audio-video experience but lacks support for Dolby Vision and Dolby Atmos. The Box also has built-in Chromecast Ultra which lets you cast/mirror any of your devices on the TV at up to 4K resolution.

Since it is powered by Android TV, you get the Google Assistant along with all its functionality right off the bat. The Mi Box 4K will have an included Mi Remote, a remote controller to allow you to navigate through the UI and offer quick access to popular apps. A 2.0GHz quad-core Amlogic processor powers the Box, coupled with 2GB of DDR3 RAM and 8GB of internal storage for apps. 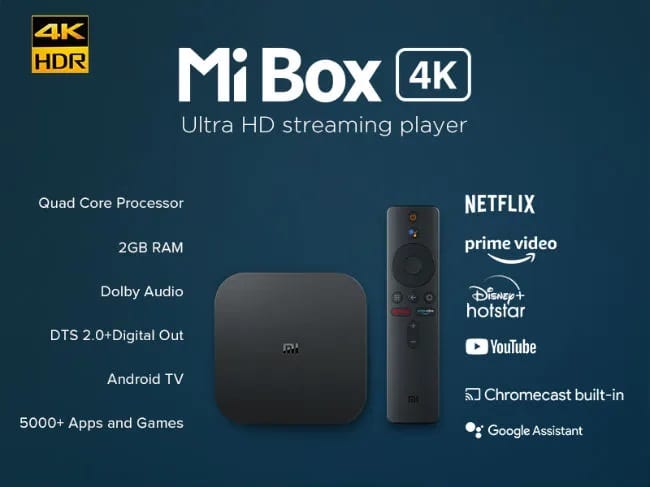 In terms of connectivity, the Mi Box 4K is Wi-Fi enabled and supports Bluetooth 4.2. There is a 3.5mm audio port, USB 2.0 and HDMI 2.0b – which adds 4K support, with up to 60FPS. Out-of-the-box the device will run on stock Android TV (based on latest 9 Pie) interface, unlike the company’s range of smart TVs which runs on Xiaomi’s PatchWall interface.

Pricing and Availability in India

The Mi Box 4K will be available at an affordable price of Rs 3,499 starting May 10 at Noon on Flipkart, mi.com, Mi Studio, and Mi Home. For comparison, the Amazon Fire TV Stick 4K (to which the Mi Box 4K will be competing against) is priced at Rs 5,999.