Dear Xbox, What Even is ‘Gameplay’?

The Inside Xbox event that has been heavily marketed throughout the week has just ended. And wow, the response is NOT what they were hoping for. As is quite evident from the comments and dislike ratio on the reveal, it’s pretty clear that most gamers left with a sour taste in their mouth after the barrage of ‘next-gen gameplay‘ that was shown. Let’s break it down. 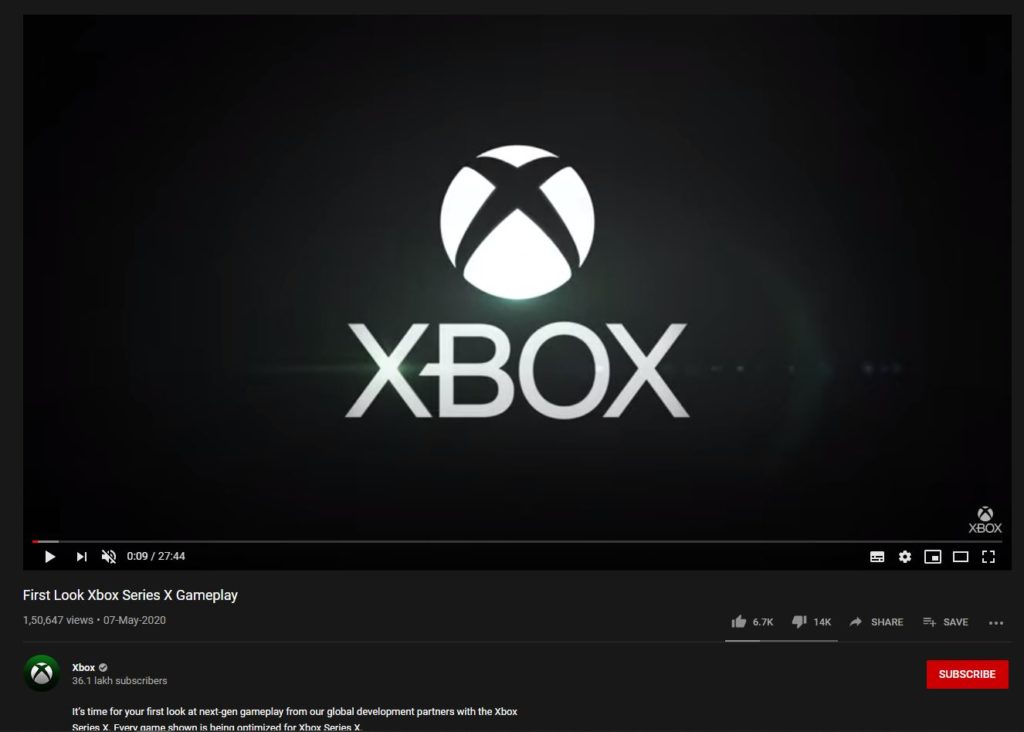 To start off, the event was highly anticipated by many to be, and marketed as, the first real look at next-gen gameplay. The event marks the first of many that’ll be held across the Summer Game Fest leading up to the release of the next-gen consoles – Xbox Series X and PS5. As such, many expected to see some solid gameplay from 3rd party studios.

What ended up happening was a disappointing reveal. The event saw the announcement of new games like Bright Memory: Infinite, Chorus, Madden 21, Dirt 5, Vampire: The Masquerade – Bloodlines 2, Call of the Sea, The Ascent, The Medium, Scarlet Nexus, Scorn and of course Assassin’s Creed: Valhalla.

The last one, Valhalla had immense hype built around its proposed gameplay reveal during the event, something Ubisoft and Ashraf Ismail (creative director) themselves hyped up:

Now, in their defense, Ismail did later tweet out that they would be revealing a gameplay trailer, not a long demo. However, the use of the word ‘gameplay’ is key here. Just take a look at Xbox’s marketing throughout the week leading up to the event. ‘Gameplay’ is what we were promised, and we did get it – only not as much as people were hoping for.

Most of the event saw an influx of gameplay trailers – heavily edited footage taken directly from in-game assets. Now, some games did showcase actual gameplay, like Vampire and The Ascent. However, when it came to Ubisoft, this is what we got:

Again, to be fair this does fall in line with what Ubisoft has called ‘gameplay trailer’ in the past. A quick search reveals that previous gameplay trailers have been heavily edited in-game footage. However, most people wanted to see actual gameplay – not an edited trailer using in-game assets. This entirely falls on Xbox and their partners’ usage of the word and how they marketed the event.

You can check out how the industry has responded to the latest Inside Xbox event here:

That Inside Xbox didn't feel like a good way to do an introduction to next gen, felt unimpressive for the most part. Probably the best Inside Xbox in terms of moving through games though. Also I think they might have a different definition of Gameplay.

Something I feel Microsoft should really focus on with upcoming presentations are proper demonstrations of games rather than trailers. Building that suspense and demonstrating what makes a game interesting via gameplay makes a huge difference.

I think the main issue is that we need a CLEAR definition on what the word "Gameplay" means because my definition is not the same as what was shown. Does it make it bad? No? Just different.

So what's your grade for Xbox event today? #SummerGameFest

Seeing as how the whole event was heavily marketed as our first look into next-gen, it was kind of a letdown. The most amazing looking game out of the bunch was Bright Memory: Infinite, and that’s a reboot of a current-gen game made by a single individual developer.

Going forward, I really hope this trend of calling in-game cinematics as ‘gameplay’ ends. For years now we’ve seen how gorgeous trailers don’t always translate into what the final game looks like. If anything, all of this is extremely reminiscent of how a lot of mobile games are marketed. You know what I’m talking about.

With this behind us, hopefully, future events in the Summer Game Fest learn from it. This sure makes Sony look much better with the new Last of Us: Part II trailer, which already looks miles better than what was showcased at the Inside Xbox event. Onto the PS5 reveal then…

The post Dear Xbox, What Even is ‘Gameplay’? appeared first on TechQuila.

Dear Xbox, What Even is ‘Gameplay’?