Intel’s new Xe HP GPU: The Father of all GPUs?

AMD has been doing very well with the newly released Gpus lately. However, Intel’s new GPU can turn the table again and AMD might be beaten at the game. For a couple of days, Intel has been continuously tweeting about many things. One of the deleted tweets by Intel was about the incorrect use of masks major Intel staff like Raja Koduri and Jim Keller. Intel’s recent tweet was about the new Xe HP GPU. Raja Koduri referred to the GPU as the ‘Father of All’ GPUs.

The GPU already has the successors and it is in the design phase right now. The suspected masterplan of Intel involved a multi-layered approach to building MCM GPUs. The tweet confirmed the masterplan. The GPU’s picture also meant it was a customer-grade variant rather than being Ponte Vecchio.

The Master of all GPUs in the Design Phase

To understand this GPUs strength people have compared it with mythical and comic superheroes. Referring to it as ‘Bahubali’ which means very powerful or calling it ‘Superman of all GPUs’ point towards its immense strength of computing. The GPU is said to be the most powerful GPU ever to be made to this day. These sheer comparisons tell how excited fans already are about this new in-the-making GPU. He gave small hints about the release of the GPU. The delay will be less than the Bahubali movie’s announcement and release. We can expect the GPU to hit the market in less than a year.

This was called the “baap of all” by our team….The “Baahubali of all” is baking as well. Let’s hope the wait will be shorter than what @ssrajamouli put us through for @BaahubaliMovie 🙂 https://t.co/psWsIL5rnp

Last year in December 2019 Raja Koduri tweeted about crossing the significant milestone in designing the largest silicon design in India. He also told that the team with which he was working calls it the ‘Baap of All’ which means ‘Father of All’. Raja Koduri also cleared that he was talking about the Intel’s Xe HP GPU. Raja Again tweeted about the GPU and confirmed to support 16 bit which is essential for AI and deep learning applications. The package features an LGA Design interestingly.

Specifications of the Silicon Design

The camera is perfectly centered. It also has a convenient scale reference. If we use pixel counting algorithms and use the conservative estimate for an AA battery with a length of 49.2mm, we can get at the following results: 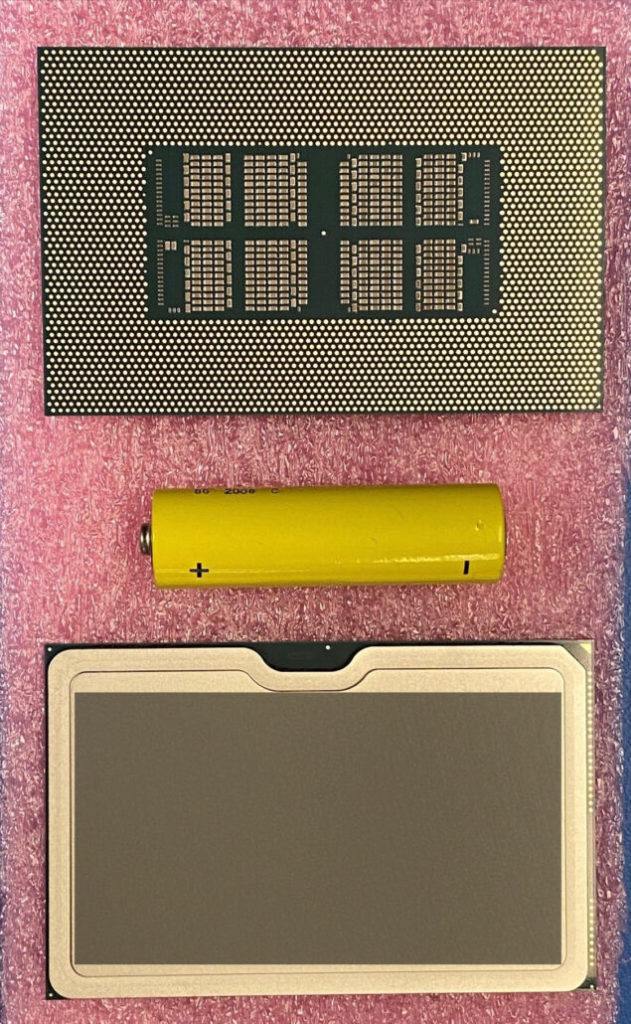 Wccftech calculated the area of the chip which was 3696mm². The chip has a length of roughly 1 double AA cell and the width is 53.6% larger than a double cell. The exact figures were 48.9mm length and 75.6mm width. The usable area under the heat spreader was 2373mm² roughly. The actual surface area comes out to be 2000mm² which proves that it is the father of all. Wccftech again speculated that If we assume Intel is utilizing the 2000mm² area(close to the full heat spreader area), we can get the rough estimation of tiles. The fact is unclear now that how Intel Xe HP will connect with Intel’s Ponte Vecchio GPU. We will be looking at either 4 tiles with 500mm² or 8 tiles with 250mm² to achieve the maximum surface area if they are connected or similar.

However, We have to still wait for the release and see if the speculations will be correct or not. We have to see that How Intel will perform in the market with AMD in its competition.

The post Intel’s new Xe HP GPU: The Father of all GPUs? appeared first on TechQuila.

Intel’s new Xe HP GPU: The Father of all GPUs?