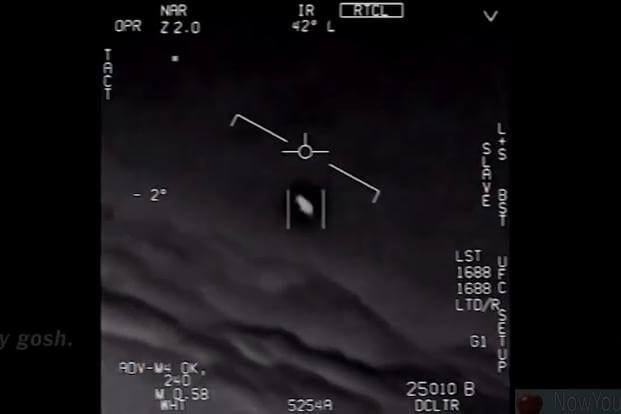 2 out of the 3 confirmed videos show the perplexity of the American naval soldiers who encountered these UFOs and occasionally dropping invectives to express the same. The oblong shape was a shared characteristic in all the 3 clips, one of which was captured by a Raytheon Advanced Targeting Forward Looking-Infrared Pod containing the most advanced sensors and tracking system on the planet. Curiously, the flying object still defies the infrared camera’s trace, accelerating almost instantaneously to the left.

Do Aliens Exist? Ex-Israeli Space Chi…
The most memorable train rides
Alien and UFO Mystery In Telugu-Alien…
Recent Raccoons and My Depression
Alien Abduction: Close Encounters In …
The Guardian’s report containing the tapes

“Look at that thing dude! Its rotating!”, said a pilot during one of the newer Sightings.

“This was extremely abrupt, like a ping pong ball, bouncing off a wall. It would hit and go the other way,” remarked a retired US Navy Pilot, David Fravor.

“It accelerated like nothing I’ve ever seen!” said one of the commanders who witnessed the scene while on a training mission.

The reasons for such an abrupt acknowledgment are unknown. Sue Gough, a Pentagon spokesperson remarked saying, “After a thorough review, the department has determined that the authorized release of these unclassified videos does not reveal any sensitive capabilities or systems,” although this doesn’t quite complement a Navy spokesperson’s answer to a Freedom of Information Act request sent by a VICE reporter. The reply stated that releasing such footage could cause “exceptionally grave damage to the National Security of the United States”, as reported by Business Insider.

Could this have been a tactic to avert everyone’s attention from the pandemic and reduce the degree of panic? Does this mean extra-terrestrial life exists? The answers to such questions are uncertain. It is important to note that UFOs are not synonymous with aliens, in fact, these aircrafts could very well be mystery military tech of other countries which may have broken into America’s borders intentionally or unintentionally but this doesn’t mean one should turn a blind eye to the probability of alien life entering earth’s atmosphere.

As highlighted by one of the pilots, the UFOs moved in peculiar ways pulling off manoeuvres which no earthly aircraft can at hypersonic speeds. Jets which can attain such velocities are scarce and the ones that do, like the X-43A are very distinctly sharp and triangular in shape, unlike the soft-edged oblong aircraft.

Luis Elizondo, a former Pentagon official believes that there is very compelling evidence supporting the existence of extra-terrestrial life and these tapes are one of them (for more on Luis, click here). Though nothing has been demystified, one thing is for certain – this step towards transparency has the power to alter our understanding of life completely.

The post The Unsolved Mystery Behind Pentagon-Confirmed UFO Sightings appeared first on TechQuila.