Due to the ongoing COVID-19 pandemic, the medical infrastructure of the world is under extreme stress. The biggest concern for authorities around the world has been the lack of medical supplies for the people in need. Hospitals around the world are making the most of what they have, and this raises some concerns. The mere fact that hospitals can manage to treat the number of patients they have right now is no reason to become complacent. One misguided action can trigger an uptick in the number of patients, which would require exponentially larger numbers of medical equipment than what they have now.

The biggest point concern has been the Ventilators. Especially since COVID-19 is a respiratory disease, ventilators have become a prized possession for medical institutions around the world. During the worst phase of the disease, some patients have a lot of difficulty in breathing, which makes ventilators necessary for the treatment. This situation arises when the lungs fail to supply enough oxygen to the patient’s blood. The shortage of ventilators is an alarming situation where we could potentially see deaths from the pandemic, which could’ve been avoided. 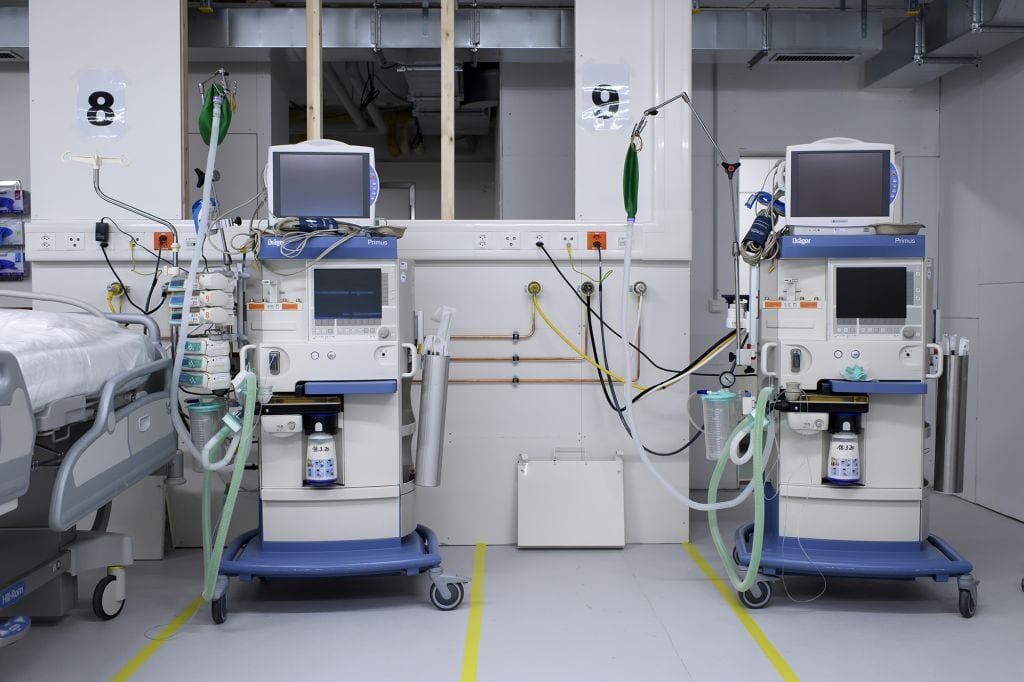 A ventilator supplies oxygen to the blood when the lungs of the patient are unable to do so.

To tackle this problem, three separate groups of Physicists are putting to use their laboratory skills and expertise into conceiving and building new designs for ventilators. The sole aim of this venture is to provide ventilators that are minimalistic in design, cheap to build and operate and are easily available. This does not mean that the physicists are making a compromise on the functionality and reliability of these machines.

The fact is only a small percentage of the total patients need ventilators. However, hospitals in hard-hit regions can see a very big influx of patients, which means they will need such ventilators in the near future.

Researchers at DarkSide Collaboration and CERN were roped in to help with these projects at their separate laboratories. Dark matter research requires building and operating liquid Argon detectors. These are highly specialized pieces of machinery that require precise gas control systems. The expertise of the experimental physicists in handling these highly specialized gas systems made them a natural candidate for such a project.

The researchers at CERN generally work with particle detectors that require big cooling systems utilizing Carbon dioxide. This means that their work had much more in common to building a ventilator than anyone would’ve thought. Another group of Physicists in Portugal has come up with a minimalist ventilator design, keeping in mind the availability of the components used during the pandemic.

A ventilator prototype made by the car manufacturer Tesla.

The global effort to relive some pain of the pandemic is not restricted to the Physicists. Several industrial giants have stepped up and provided designs and monetary help to ventilator companies to churn out these devices at a faster rate. However, the physicists’ emphasis on minimalism means that these designs could be considered if there was a shortage of resources in some of the poorer parts of the world.

These exemplary designs and instances of people coming together from different fields are perhaps the biggest positive side of this unforeseen calamity.

This post first appeared on TechQuila, please read the originial post: here
People also like
Building a Talent Pool in a Tight Market
Mental Slot Review and Playtest (NoLimit City)
Awakening DIY Citrus Shower Bombs
Day 4 – How to Rehab a Painful Shoulder
Full-Time Gambling — Viable Profession or a Fool’s Trap?
18+ Adult Movies Of All Time To Fulfill All Your Sexual Fantasies| Lolita, Exotica and More
7 Reasons Why You Should Hire A Female Divorce Attorney