What is a VRM (Voltage Regulator Module): Phases, Cooling, and Doublers

When buying a graphics card (or motherboard), most people check the core GPU specs, VRAM and heatsink solution, but often overlook an important component: VRM or the Voltage Regulation Modulator. The VRM makes sure your GPU (or CPU) gets the required power at a consistent voltage. A low-quality VRM can cause many issues including random shutdowns under load, poor overclocking and even reduce the life-cycle of your GPU.

How do VRMs Work

A modern PSU supplies 12 volts of power to the motherboard and graphics card. However, CPUs and GPUs are sensitive and can’t withstand that kind of voltage. That’s where the VRM comes into the picture. It steps down the incoming 12-volt power supply to 1.1 volts and sends it over to the CPU or GPU core and memory.

This isn’t a simple task and requires precision. Even one voltage spike can damage the processor, turning it into an expensive paperweight. The VRM consists of three parts: MOFSETs, chokes or inductors and capacitors. Lastly, there’s a controller chip that regulates the voltage, called the PWM controller.

Most modern GPUs and CPUs leverage multi-Phase VRMs. These are more efficient and reliable than single-phase VRMs. They function by distributing the supplied power among themselves, reducing the load on the individual components as well as the heat produced.

The various phases of a VRM take turns to supply power to the CPU/GPU, each supplying a small portion of the required amount. This not only improves the heat dissipation and efficiency but also helps power processors with higher TDPs safely.

Only one phase is active at a time, but the amount of power supplied remains constant. The higher the phase count, the more power can be supplied safely without the risk of short-circuiting or damaging components.

VRMs are usually named as 6+1 or 8+2. This means that six or eight phases are for powering the CPU/GPU core and one or two are for the memory. In some cases, you’ll motherboards with 12 phases of more. These are mostly just six-phase VRMs using doublers to essentially “double” the capacity. While still better than regular six-phase parts, they’re not as efficient as, say eight or 10-phase VRMs. Doublers are usually implemented to reduce costs and improve product value.

To the average person, this will be hard to spot but a trained eye can make out the difference. 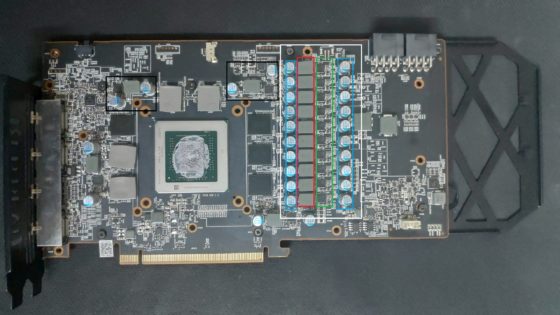 The above is from a PowerColor Radeon RX 5700 XT Red Devil. The part highlighted by the white box is the GPU Core VRM and the two black boxes show the memory VRM. The red ones are the inductors (chokes), the green ones are the MOFSETs and the blue ones are capacitors. Every VRM will consist of these three components, regardless of the processor or device.

There are two more sets of VRMs, one below the core VRM and one to the left of the GPU. These are most likely the SoC and VDDI (memory voltage controller) railings. 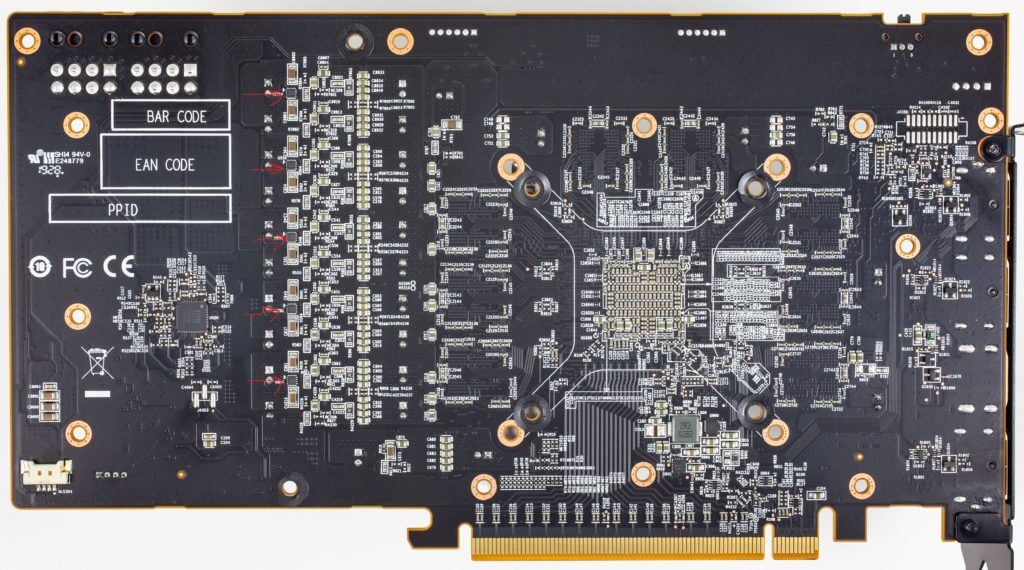 Have a look at the back-side of the PCB. The red arrows are pointing to the doublers. There are five of them. Each splits (or balances) the power between the two phases they are connected to and allow the 4+1 phase PWM controller to be used as an 8+2 phase.

Again, a 5 phase VRM doubled to 10 is less efficient than a native 7 phase or eight-phase VRM. The reason being that the doublers induce a small delay to the PWM signals, making the whole process slightly less efficient. Regardless, a 10 phase (doubled) VRM is still better than a 5 phase and is a cheap trick to allow a higher power draw.

A good quality VRM is essential for overclockers. It allows increasing the power consumption past 100% and at times a good VRM can also supply slightly more voltage than spec. A low-quality model will result in shutdowns and other anomalies when overclocking is attempted.

Japanese capacitors are considered the best while Ferro-magnetic Alloy chokes tend to be more efficient than the rest. It’s also useful to get graphics cards that have a separate heatsink or cooling solution for the VRM as it tends to heat up upon overclocking.

The post What is a VRM (Voltage Regulator Module): Phases, Cooling, and Doublers appeared first on .

What is a VRM (Voltage Regulator Module): Phases, Cooling, and Doublers