Selecting the best Programming Language for website and web applications development is one of the prominent debated questions among all the companies indulged in the web development business, students and programmers. Today every one is more curious to get the answer for the question which is the best technology or language that can be utilized for web development in 2020?

Languages like PHP, Python and Ruby have their respective benefits and disadvantages. Hence the selection of the language completely depends on the requirements that are there for the development. Therefore in this blog you will get a detailed analysis on PHP vs Python vs Ruby, so that you can choose the best language as per your defined needs and requirements. The comparison includes details related to different statistics, parameters and data so that you have a confined understanding about all the three languages which is popularly used by the developers.

It is an object oriented programming language which was developed by Dutchman Guido van Possum in the 1980s. Being an open source, it is one of the prominent popular programming languages that is utilized for designing qualitative web applications like testing, scripting and developing. The development gets easy by using this language as it provides a platform where code readability is easy and lesser coding is done by the Python developers.

Because of its elegance and simplicity various technological leaders like Cisco, Google, IBM, Dropbox and HP have implemented Python. In order to build extremely secure enterprise web applications Python is the most preferred language. Talking about the global market presence, Python possess 0.185%.

PHP is the most widely used general purpose scripting language that is designed specifically for developing web applications and dynamic websites. It is an open source and can be easily embedded into HTML language.  In comparison with the other frameworks available in the market, PHP possesses a wide range of tools, technologies and frameworks which thus makes it the best preferred choice. By hiring PHP developers you can easily design websites for all businesses ranging from small business to enterprise level solutions.

PHP frameworks that are widely used in the market are Faker, Laravel, Symfony and Codeigniter. Because of its features like quick development speed, secure coding environment and lesser development cost. Various startups, small – large companies and enterprises consider PHP development companies in USA and UK. The prominent and popular websites like Google, Facebook, Yahoo, Wikipedia, WordPress are running on PHP. Talking about the global market presence, PHP possesses 10.348% which is way high in comparison with Python and Ruby on Rails.

What is Ruby on Rails?

Developed in 2003 by David Heinemeier, Ruby on Rails is one of the optimized open-source frameworks which is popularly utilized for designing web applications. By utilizing efficient Ruby on Rails Development Company, developers can design web applications quickly in comparison with other programming languages. Hulu, Twitter and Slideshare are the prominent web applications that are developed using Ruby. In comparison with PHP and Python, Ruby is more object-oriented. Ruby possesses 0.60% of the global market share.

Advantages of Ruby on Rails: Disadvantages of Ruby on Rails:

To identify which programming language is gaining popularity among the masses, the best way is to grab the information related to the market share and usage statistics. ‘The picture above depicts the server-side programming languages that are prominently used in the market today.

Websites that are designed using PHP vs Python vs Ruby: 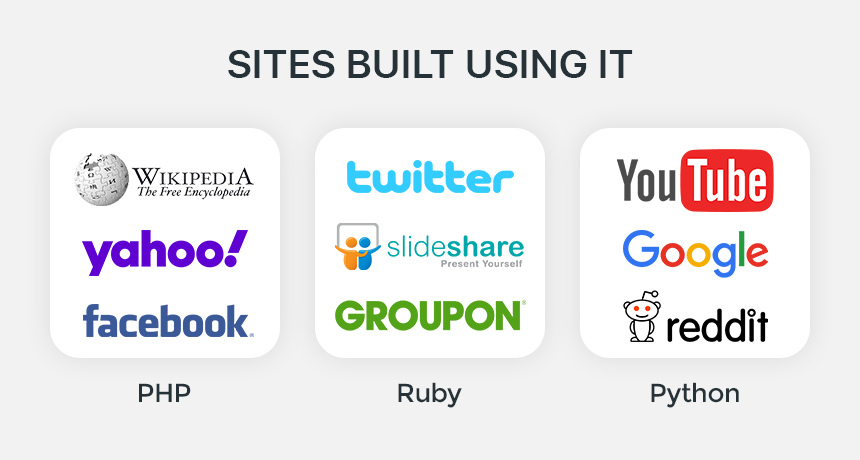 Usability: PHP vs Python vs Ruby

The above picture clearly defines a comparison in these three languages on the basis of usability.
.

Ease of Learning: PHP vs Python VS Ruby

Comparison on Popularity: PHP vs Python vs Ruby on Rails

Today, PHP is one of the prominent programming languages in the world with a huge customer base and loyal coders community. Whereas the other two languages Python and Ruby are new to the web development industry and are less popular among the users.

Comparison over Performance: PHP vs Python vs Ruby

Employability and Potential Earnings- PHP vs Python vs Ruby

Before selecting the programming language for development, it is really important to identify the prime advantages of the various platforms that satisfy your requirements. Though all discussed frameworks are best for website and web application development. Moreover if you have any query in regard to these programming languages or want to develop your website, feel free to get in touch with us.