This will likely be the single most depressing addition to my SPACE TRIVIA series, but it's important to know. If you easily lose your Zen to not-happy space news, skip me and go read The Bad Astronomer today instead. Awesome blog.
But, here are some bite-sized facts about space junk. At this time, pieces of orbital debris in Low Earth Orbit (LEO) and Geosynchronous Orbit (GSO) number in the tens of millions.

That's right, tens of millions. Nearly 20,000 of these are larger than 10cm. Particles between 1-10cm are estimated at about half a million. The rest are less than 1cm. 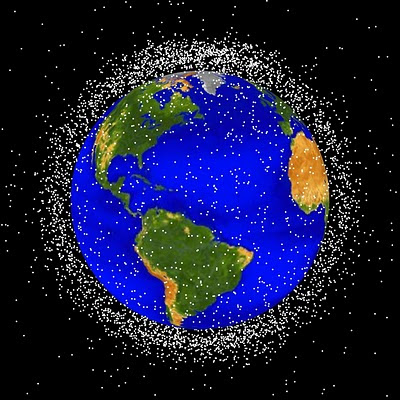 LEO
Orbital Debris is defined as a human-made object in orbit around the Earth which no longer serves a useful purpose, such as launch vehicle upper stages, spent payload carriers, derelict spacecraft, pieces resulting from explosions or collisions, and even tiny paint flecks released by impacts.

Most orbital debris reside within 2,000 km of the Earth's surface, or are in LEO.

How do we estimate the numbers and placements? Ground-based radars can detect objects as small as 3mm, and space-based detection systems can detect things as far as 40,000km out.

The US Space Surveillance Network tracks all orbital debris larger than 10cm. An average of one catalogued piece of debris falls back to Earth each day, and this has been the case for the past four decades. 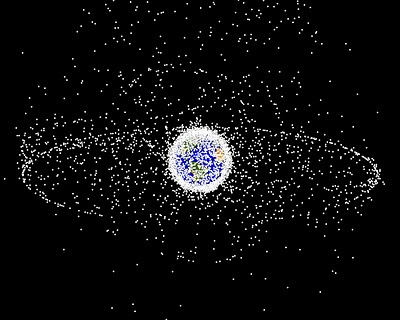 GSO
In LEO and below, orbital debris circles at around 7-8 kilometers per second, or up to 18,000mph.

As a result, the International Space Station (ISS) is the most heavily shielded spacecraft ever flown. Nodes holding human crews and pressure tanks on the structure are able to withstand impact of debris as large as 1cm. The ISS can also maneuver to avoid tracked objects.

The higher the altitude, the longer the debris will remain in orbit. Debris left below 600km fall back to Earth within a few years, though precious little survives the super-heated re-entry through Earth's atmosphere. Things higher than 800km take decades to return. Above 1,000km or more? Those may circle for a century or more. 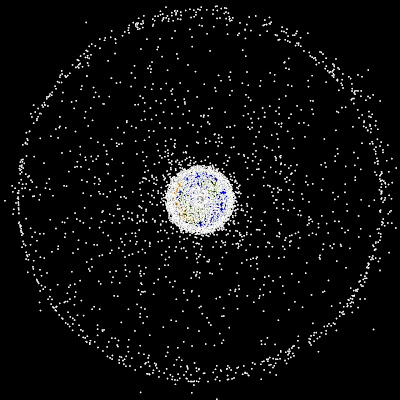 GSO Polar View
Most telecommunications and meteorological satellites operate at the 36,000km altitude in geostationary orbit, where the problem or orbital debris is less severe. Which is not to say... harmless.

If you participated in the UARS hype, and have nothing better to be indignant about this week, you can read all about how NASA handles Orbital Debris Re-Entry. Or if you want to be part of all future re-entry hype, you can sign up for NASA's "Orbital Debris Quarterly" newsletter.

This post first appeared on Pillow Astronaut, please read the originial post: here
People also like
high cholesterol foods to avoid - lovelcute
Giant Piece of Space Junk Expected to Crash into Earth this Weekend
How to do a pedicure
How To Get Rid of Ticks in the Yard – 8 Steps
This Year’s Best Black Friday Sales For Families
Verisimilitude VS Reality - Part 4 - Story Arc and the Fiction Delivery System
If I Only Had 10 Days to Live
Get Fit & Burn Calories Gardening- 6 Ways To Turn Gardening Into A Workout
Aerospace Manufacturing Giant Announces to Open Rocket Engine Production Center
A Comparison of the Environmental Impact of Mineral Wool Fibre and Sprayed Polyurethane Foam Insulations