On January 7, 1610, Italian astronomer Galileo di Vincenzo Bonaiuti de' Galilei discovered Jupiter's satellites Callisto, Io and Europa. He was on a roll with his new-fangled telescopio, as only a week later on January 13th, he also spied Ganymede, later confirmed to be the largest moon in our Solar System.
These four Jovian moons, initially titled "Medician stars", are now referred to as "the Galilean satellites", and Galileo's observations of their orbits would be instrumental in over-turning the belief [cough*wishful-thinking*cough*cough] that ALL objects in the universe revolved around Earth, including our Sun. 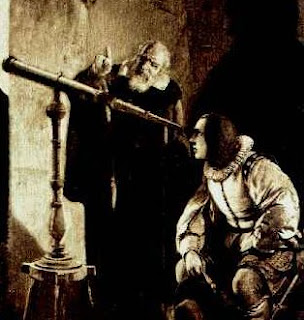 Galileo, Figaro, Magnifico, oh oh oh...
This particular Copernican concept was a hard-sell during the time of the Roman Inquisition. Various clerics – up to and including the Pope – denounced him as sacrilegious, censored his books, attempted to bar him from teaching or publishing, and ordered him to undergo a trial before the Holy Office of Rome.

At his sentencing in June of 1633, ten Cardinals of the Holy Roman Church, as commissioned by the Apostolic See as 'Inquisitors-General against heretical depravity in Christendom', read the following statement in court:

"We pronounce, sentence, and declare that you, Galileo, because of the things deduced in the trial and confessed by you, have rendered yourself according to this Holy Office vehemently suspected of heresy, namely of having held and believed a false doctrine: that the sun is the center of the world and does not move from east to west, and the earth moves and is not the center of the world, and that one may hold and defend as probable an opinion after it has been declared and defined contrary to Holy Scripture."

Galileo was placed under house arrest until his death at age 77 in 1642. 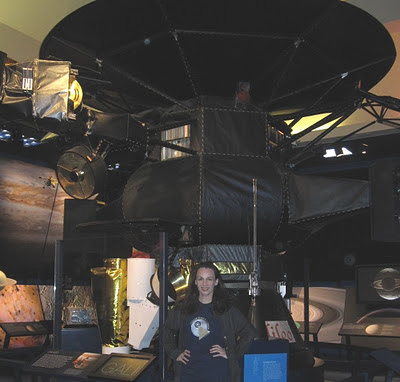 Jupiter has 63 confirmed satellites, and one floating trouble-maker being argued over by chaps who are much smarter than I, so I'll not venture an opinion. Time will tell if #64 nails the audition, but in the meantime, the Voyager, Hubble, and Galileo craft offered interesting portraits of the fantastic four: 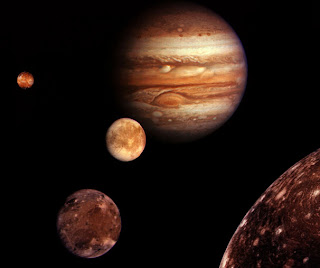 Ganymede is larger in diameter than Mercury, with ice and silicate crust covering underground ocean in some areas. Abundant craters and mountains surrounded by lava flow indicate ancient origin.

The next largest, Callisto, is considered a likely spot for a human base when we reach Jupiter, as study indicates the presence of water ice, ocean, carbon dioxide and possible organics.

Io is the most geologically active object in the Solar System with over 400 volcanoes, many higher than Earth’s Everest. Lava flows often invade the frosty sulfur dioxide surface, creating yellow, red, green and black compounds, creating a "pizza planet" exterior.

Europa, smallest but perhaps best-known, is about the size of Earth's moon and has an oxygen atmosphere. Its bright, smooth [well, un-cratered] crust led to the hypotheses that it is quite young, and may also have oceans beneath its surface.

This post first appeared on Pillow Astronaut, please read the originial post: here
People also like
Karen S. Wiesner, Tension and Twists, Part 3 (Writer's Craft Article)
How to Price Your Craft & Design (part 1)
Easy Pet Rocks Craft Idea For Kids
How to Make the Most of Your Clinical Physician Job…