I've seen these terms bandied about, but not even the schmoes who coined them can decide what's what. Occasionally, the International Astronomical Union tries to set definitions in stone, but no one ever agrees... so it's like a high-IQ version of Congress without all the fancy neckties and sex scandals.
I initially planned this post as a companion to the Pluto Trivia I'm preparing for a Twitters series. I encourage those interested to examine the linked definitions, and try not to start any fights. I settled for familiarizing myself with the most prominently debated objects, here listed smallest to largest:

1) Ceres
Classification = Former planet, Dwarf Planet, "largest asteroid"??
Approximate Diameter = 950 km
Ceres is the smallest identified "dwarf planet" in the Solar System and the only one in the asteroid belt between Mars and Jupiter, accounting for about a third of the belt's overall mass. Discovered in 1801, it was classified as the 8th planet for half a century. The surface of Ceres is a mixture of water, ice, and various minerals, with the possibility of sub-surface liquid oceans. NASA's Dawn space probe, launched in 2007, will reach and explore Ceres in 2015. Ceres was the Roman goddess of growing plants, harvest-time, and maternal love.

2) Quaoar
Classification = Dwarf Planet, TNO (plutoid)
Approximate Diameter = 1260 ± 190 km
Quaoar is a binary system orbiting the Sun in the Kuiper belt, and the very first TNO to be measured directly from pictures taken by the Hubble Space Telescope! It orbits 3.7 billion miles from the Sun with an orbital period of 287 years. Quaoar is named for the creator god of the Tongva, the native peoples from what is now Los Angeles. It has one satellite, Weywot, which may be a collisional ice fragment, though details about its orbit are unknown. The sky god Weywot was the son of Quaoar in Tongva lore.

3) 2007 OR10
Classification = Dwarf Planet "candidate," TNO (plutoid), SDO
Approximate Diameter = 875–1400km
2007 OR10 is currently the largest known Solar System object without an official name, though its discovery team nicknamed it Snow White, as it would have to be very bright to be detected by their survey. 2007 OR10 is on an orbit similar to that of Eris, circling the Sun every 552 years.

4) Orcus
Classification = Dwarf Planet "candidate," Plutino, TNO (plutoid), KBO
Approximate Dimensions = 946.3 +74.1−72.3km
Because their mutual resonance with Neptune constrains Orcus and Pluto to remain on opposite sides of the Sun in otherwise similar motions, Orcus is oft described as the "anti-Pluto." Orcus was a Roman underworld god and punisher of broken oaths, likely adapted from the Greek demon Horkos, the personification of Oaths and son of Eris. Using observations with the Hubble, astronomers detected a satellite, as yet unnamed and circling every 9 days. Scientists suspect that like the Pluto-Charon system, Orcus and its moon are likely tidally locked.

5) Sedna
Classification = Dwarf Planet "candidate," TNO (plutoid), SDO, new DDO?
Approximate Diameter = 1600 – 1800km
Sedna's precise orbital period is unknown, but calculated at between 10-12 thousand years. At the time of its discovery, it was the largest object found since Pluto in 1930, and also the furthest from the Sun. (Eris would prove further, though Sedna's elliptical orbit will overtake it around 2114). Observations from NASA's Spitzer Space Telescope indicate it is nearly as red as Mars. In Inuit mythology, Sedna is goddess of marine animals, who rules the underworld (Adlivun), where souls prepare for travel to the Land of the Moon (Quidlivun). 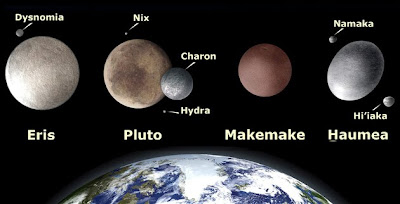 6) Haumea
Classification = Dwarf Planet, TNO(plutoid)
Calculated ellipsoid shape = 1,960×1,518×996 km
Haumea is a dwarf planet in the Kuiper belt which orbits the sun every 283 years. Calculations from its light curve suggest elongated ellipsoid shape, with its greatest axis twice as long as its shortest axis. Other indicators show unusually rapid rotation and a surface of crystalline ice. In Polynesian lore, Haumea is the Hawaiian goddess of fertility. Known moons are named after two of her daughters, Hi’iaka, patron goddess of the Orchid Isle, and Namaka, a water spirit.

7) Makemake
Classification = Dwarf Planet, TNO (plutoid), KBO
Approximate Diameter = 1800km
Makemake's discovery team used the codename Easterbunny for the object, because of its discovery shortly after Easter. In accordance with rules for Kuiper Belt Objects, it was named for a creator deity: Makemake was the creator of humanity and god of fertility in the folklore of the Rapanui, natives of Easter Island. Its low average temperature, about −243.2 °C, means its surface is covered with methane, ethane, and possibly nitrogen ices. Makemake orbits the sun every 310 years.

8) Pluto
Classification = Former planet, Dwarf Planet, TNO(plutoid)
Approximate Diameter = 2,390 km
Pluto, the most controversial due to its demotion from planet status, is about one-fifth the mass of Earth's moon. Like other members of the Kuiper Belt, Pluto is composed primarily of rock and ice. It has an eccentric orbit that causes it to periodically to come closer to the Sun than Neptune. Pluto was the Roman God of the underworld, derived from the Greek Ploutōn, another name for Hades. Pluto orbits the sun every 248 years, and has three moons: Charon (the ferryman who carried deceased souls across the River Acheron in Hades), Hydra (the multi-headed serpent who guarded Acheron) and Nix, (after "Nyx," the Greek goddess of darkness and night).

9) Eris
Classification = Dwarf Planet, TNO (plutoid), SDO
Approximate Diameter = 2,500 km
Eris is about 27% more massive than Pluto, making it the largest known "dwarf planet" in the Solar System, and the ninth-largest body known to orbit the Sun. Eris has an orbital period of 557 years. Discoverers originally called the object Xena, but the official name became Eris, after the Greek goddess of strife. There is one Eridian moon, Dysnomia, the demon of "lawlessness"... a humorous slant toward the first informal name, as portrayed by Lucy Lawless.

And for an absolutely brain-bending list of all the known TNOs, click here. I want all of these to be represented by chocolate!