I wish I could stop finding stories about amazing women who made incredible discoveries, only to find certain men took credit for their work and dismissively assigned them to obscurity, until an era where people were comfortable (though still not entirely happy) about giving women proper credit.

While I do love getting to the truth of these stories, I just wish there weren't so many of them. 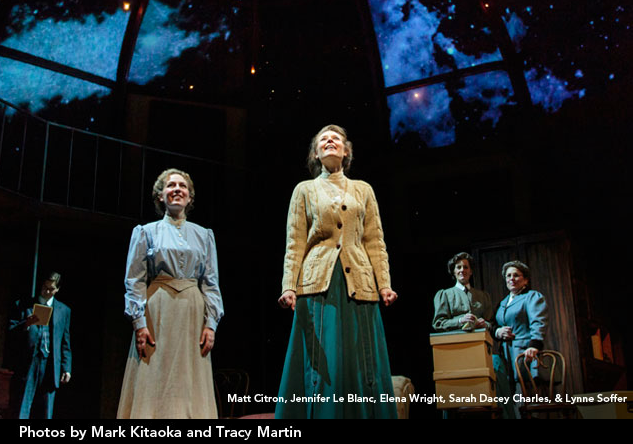 Silent Sky - Theatreworks, Mountain View performance
This past weekend, NASA Kepler scientist Natalie Batalha spoke at the "Leading Ladies" program for Theatreworks in Mountain View, discussing the roles of women in science history, the precious few in astronomy fields, and how far we have come in encouraging girls to trust their obvious abilities in STEM areas -- before society trains them to believe they "shouldn't" have any.

Following her spirited presentation was a performance of "Silent Sky" by Lauren Gunderson, a powerful play based on the life of Henrietta Leavitt (1868-1921). I cried for the beauty and wonder of science at the end. (I think the last time I cried in a theatre, Spock had just died at the end of Star Trek II.)

After earning her bachelor's at Radcliffe, Henrietta Leavitt was one of the early women "computers" hired by Harvard, to document stars. With the largest "Great Refractor" telescope of the day, Edward C. Pickering captured star fields on glass photographic plates, which were then turned over to the women for measurements and exhaustive, meticulous records. 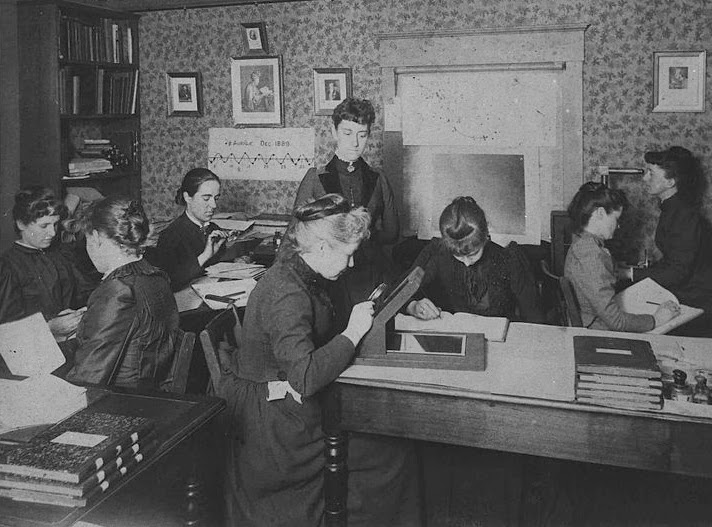 Three characters are craftily brought to life against the historical backdrop of turn-of-the-century astronomical technology, Einstein's famed 1905 publishing of special relativity, and the first ringing telephone:

Annie Jump Cannon catalogued 230,000+ stars, designed the stellar classification system in the Draper catalog (still used today!), and remains the only single female to win the Draper Medal from the National Academy of Sciences.

Henrietta Leavitt, holding at arm's length all the pressures to be married and bear children instead of earn a living, was known for staying up all hours to study the finer points of the Magellanic Cloud, comparing the brightness of 2,000+ stars.  Resulting from this work, Henrietta's most prominent triumph was discovering a relationship between the period and luminosity of classical Cepheid stars (published in 1908, and again with further evidence in 1912).

Her discovery would change all of astronomy.

These women were paid less than the Harvard secretaries of the era, and a mere fraction of what the male astronomers made.

Annie Cannon and Henrietta Leavitt
Harvard College Observatory (HCO), 1918
The enduring friendship of all the women through the years came alive on stage, with some poetic license, but artfully illustrating both their blatant and subtle struggles in the male-dominated workplace, at a time when women were also aiming at the right to vote.  The humorous highlight of the play for me was when a suffragette capitalized on a line callback about bloomers by passing that fashion entirely, and being bold enough to wear (gasp!) PANTS.

Today, Leavitt's accomplishments can hardly be over-stated, and the message of the play was clear: no amount of gender bias can quell natural passion and curiosity. They will shine through. Natalie Batalha's words rang in my ears again and again through this riveting theatrical portrayal of women who had paved the way for us: "The spirit of exploration has no gender."

Leavitt's discovery, now simply referred to as the "Period-Luminosity Relation," would prove repeatedly to be the foundation for our modern understanding of cosmological distances.

benefit of coconut milk
Karen Wiesner: I Have Dreamed a Littl…
Most popular jewellery this Christmas…
Everything5pounds review: Is it Legit…
Among Physicians, Men Make More Than …
Edwin Hubble acknowledged his use of Henrietta Leavitt's work, though in his own paper, credited not the woman who had actually done all the precision work, but one of the advisers at Harvard (who insisted "his interpretation" of Leavitt's discovery was more important than her decades of actual findings). And of course, you'll notice whose house is a National Historic Landmark and who has a namesake space telescope.  Hint: Not Henrietta Leavitt.

Hubble later claimed Leavitt indeed deserved a Nobel Prize, and she may very well have received one, had she not perished from cancer before this could be accomplished. Of her own 35 academic papers, most were published posthumously.  And while Henrietta does have Asteroid 5383 named for her, I think it's time for an observatory named after a woman astronomer.

This post first appeared on Pillow Astronaut, please read the originial post: here
People also like
benefit of coconut milk
Karen Wiesner: I Have Dreamed a Little Dream (Authors and Dream Inspiration), Part 2
Most popular jewellery this Christmas - 2020 edition
Everything5pounds review: Is it Legit or Scam?
Among Physicians, Men Make More Than Women: How Do We Change That?
Best Home Sauna To Stay Warm All Winter
Carlos Santana Releases New Single “Joy” With Chris Stapleton