How can you make your PC wireless?

Well, it’s easy. The short answer is to not use any wires.

The longer answer is that you’d want to substitute any wired functionality with their wireless counterparts. 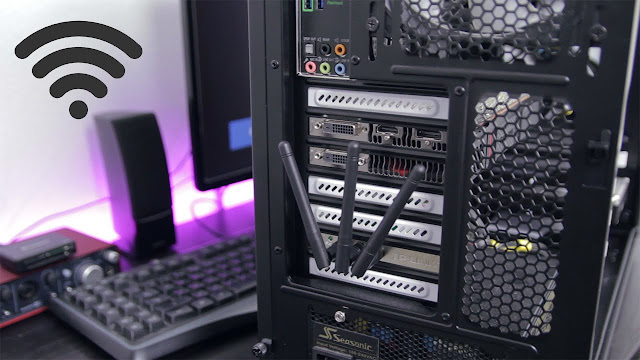 I will talk about consumers-grade devices that I’m familiar with, as of Jan 2018. (And as far as I’m concerned, it’s highly likely that the more you demands of your electronics, the more likely it will have wires.)

Do keep in mind that there will always be quite a few common trade-offs for going wireless, namely:
Many of the stuff here applies to desktop PCs - laptops are made with a portability priority in mind, so you don’t really need to “go wireless” - the machine by itself is already wireless.

First, Bluetooth and Wi-Fi to your PCs.

If your desktop PCs doesn’t have Bluetooth and Wi-Fi built-in the motherboard, you can get an expansion card that adds these functionality. (If your laptop doesn’t, it’s probably time to put the 2 decade old machine to retire.)

This usually means some antennas will be sticking out from the rear of your desktop.

Or you can get a USB dongle/ receiver that may have the antennas sticking out. This is more flexible since you can just pull it out if you don’t want to use it, but it’s the inferior choice compared to the above option.

You may need to install additional drivers for either options.

Full disclosure, if you have the traditional tower PCs, I’d prefer you use the Ethernet cable unless you’re planning to cart your desktop PC around. It’s just a superior solution in every way for everyone involved.

Now that’s for your PCs.

In order to use Wi-Fi, you’d need to have your PCs able to receive the data, and some other device that can transmit the data - sometimes this will be a dedicated device called “Access Points” (or APs) - but a lot of the times the APs also perform other networking functions so they are referred to as “Wireless Routers” - although sometimes it’s not technically correct either.

But that’s what people call it.

The non-tech people I talked with refer to the device as modem/(wireless) router/hub although none of that are technically correct for the sole function the Access Points perform, which is to allow a Wi-Fi enabled device to connect to the (wired) network and then the Internet.

So you may have to try several nouns to let someone know you’re talking about “the Wi-Fi box”. Or just use “the Wi-Fi box” and skip the technical mundanities.

Do note that Wi-Fi’s much slower, much unreliable, and unsecure compared to wired network. A 20 bucks AP is good enough for basic browsing (like Facebook, Youtube, Google), but if you want to stream 4k or have a lot of devices in your household, be prepare to buy better gear.

That’s it for now - you’d need another answer for Wi-Fi.

Second is the mouse. Easy, use a wireless mouse.

The difference between the two is obviously with a bluetooth mouse, you won’t have an unsightful dongle sticking out of your otherwise pretty ultrabook, however in my experience USB receiver mice’s connectivity is a bit more reliable.

Do keep in mind that both types run on battery, either with replaceable AA (or AAA) batteries or rechargeable batteries (usually with micro USB port like older Android smartphones).

As for input lag, I personally can’t tell, and casual users will probably feel the same. My gamer friends swear by wired mice “0 input lag” though- it got them to do a 360 no scope 1 milisecond faster. Yeah, right.

Wireless mice usually don’t have RGB lighting, my guess is to save battery, and if you’re using the gaming mice, the batter can run out very quick.

Third is the keyboard. Easy, use a wireless keyboard.

You re-read the mouse section and replace mouse with keyboard. :)

Now the difference is that the troubleshooting with keyboard is sometimes more difficult.

For some keyboards and motherboards combinations, when you want to access your BIOS the wireless keyboard will be useless since your motherboard - loading the mission critical stuff that it loads - decides that bluetooth wasn’t so high on the list, and decide to ignore the keyboard like my crush to me.

Luckily, this is becoming less of a problem over time as motherboards manufacturers catch on. Still, you’d want to keep a cheap wired board as a backup.

Third is the earphones/headphones/speakers. Easy as well.

Now you can either get a pair of cans/speakers with bluetooth built in - the usual option, or you can get a bluetooth receiver with a built-in battery or a USB port to draw power.

For the latter, plug the speakers into the receiver, and then proceed as if it’s a normal built-in bluetooth speaker: turn on bluetooth on your PCs, pair them, and off you go.

(wireless speakers of portable variety, JBL Boombox. It looks massive, because why not?)

There’s the oddball option that, if you have some fancy detachable earphone that you can pull our the wires, you can buy a wire that has a battery and bluetooth built-in. Or you can now drop the wire completely with stuff like the AirPods.

Now all of the trade-offs apply here. The range, the battery, audio quality, etc.

The nice things is that manufacturers are very actively developing the tech, so all of the trade-offs is getting less and less important. Batteries that last for a week or two of normal use, range for bluetooth 5.0 is more than sufficient for an average consumer and audio quality is close to wired headphones.

With that said, if high fidelity is your biggest concern, go wired. (If you’re an audiophile, you wouldn’t need me to tell you this anyhow.)

Forth would be monitors. Now we are chartering new waters.

The implementation behind monitors are very much like on audio devices.

You either buy something that is already wireless - which is rare, since monitors outside laptops are rarely carried around - or you get a wireless receiver and you plug that into your existing monitor, and pair the receiver with your PCs, and off you go.

For the former, I’m only aware of a monitor by Dell. FHD, no 4K. It’s rare, and I don’t know much about them.

For the latter, think Chromecast, AirPlay, Miracast, and the likes. We’re venturing into the TVs territority now, and again, I don’t know much about them.

It’s nice and getting better, but the performance limits apply here. For movies, it will be fine, even 4k, because movies does not run in 4k with 144 fps, V-sync enabled.

If you’re a gamer, use wire (but you don’t need me to tell you that). Heck, if you’re a casual user, use wire too - monitors are not small, and you’re not carting around your delicate monitor.

Not under my watch.

Fifth would be power. Now we are talking science fiction.

But with all the power consumption of a PC, it’s not likely that we can forgo the charging cable anytime soon. Even with a smartphone it still sucks - it’s slow, and it requires you to put the device on a pad.

Which is less mobile than a wire.

How can you make your PC wireless?