The Wrangler goes hybrid, gets a major overhaul 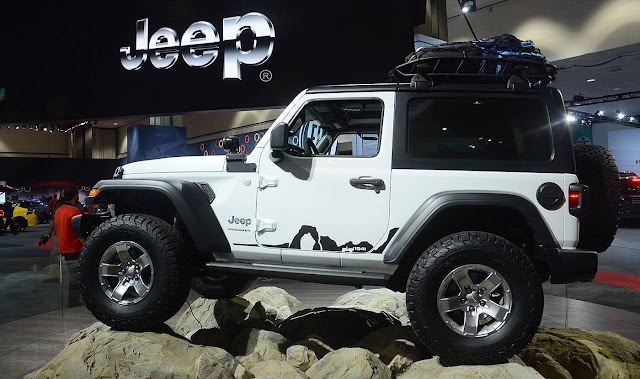 The long-awaited 2018 Jeep Wrangler made its public debut on the eve of the Los Angeles Auto Show.

We'll start with the most drastic update: the Wrangler goes hybrid -- sort of. Its optional engine is a turbocharged 2.0-liter four-cylinder that makes 270 horsepower and 295 pound-feet of torque. It's equipped with a belt-driven starter/generator that draws electricity from a 48-volt system. The mild hybrid setup improves fuel economy and performance at lower engine revolutions.

If the thought of once again seeing a four-cylinder in a Wrangler upsets you, rest assured Jeep also offers an evolution of the outgoing model's 3.6-liter Pentastar V6 engine. It makes 285 horsepower and 260 pound-feet of torque, but it benefits from minor tweaks that boost fuel economy.

Two more engines are in the works. A 3.0L turbodiesel producing 260 horsepower and 442lb-ft of torque will be made available for the 2019 model year, but the real story is the confirmation of an upcoming PHEV, slated for release in 2020. Jeep was mum on potential performance of the PHEV.

The six-cylinder comes standard with a six-speed manual transmission and it's available with an eight-speed automatic at an extra cost. The four-cylinder is automatic-only. Both variants get a standard four-wheel drive system; it's a Wrangler we're talking about, after all.

The Unlimited returns 18 mpg in the city and 23 mpg on the highway with the V6 and the automatic. Get a stick and you'll see city mileage drop to 17. In comparison, the outgoing model posts 16/21 with the automatic and 16/20 with the manual. Jeep has not yet finalized numbers for the 3.0L turbodiesel but expects 30 mpg.

The Wrangler goes hybrid, gets a major overhaul