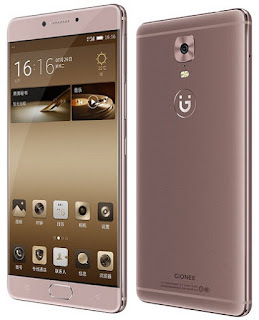 Gionee m6 is another beast from the stable of Gionee manufacturer,the smartphone which is a successor  to the gionee m5 comes with an improve processor and RAM for better performance ,sleek body design, finger print scanner and pre-installed with  android marshmallow 6.0.

Below are the highlight of gionee m6

Things you need to know about the gionee m6

Gionee m6 being release on September 2016 ,features a metal body design with a body dimension of 8.2 mm and weighs 160g which is slimmer than it predeccessor gionee m5.
The device crams a 5.5-inch AMOLED display with a full HD screen resolution of 1080 x 1920 at 401 ppi density.
The operating system is pre-loaded with android marshmallow 6.0 base on the company own amigo 3.5 user interface.
Gionee m6 sport a 13-megapixel rear camera with dual  flash and 8-megapixel front facing camera.
The rear camera with auto focus offers geo-tagging, touch focus, face detection, panorama and also capable of recording 1080p at 30 frame per/sec.
The gionee marathon m6 is powered by  a Mediatek MT6755 Helio P10 octa-core processor with a speed clocked at 1.8Ghz and the other core clocked at 1.0Ghz,in other to give users the best performance with smooth multitasking, the device comes with an Ample 4GB RAM.
The smartphone is available in two variants which comes with 64GB and 128GB storage capacity and a dedicated memory slot expandable up to 256GB via micro SD card.
It's a good thing to note that the device doesn't come with an hybrid sim slot which means you can use two Sim with micro SD card at the same time without having to switch, though the gionee m6 toe the line of iPhone 7,which lack the 3.5mm audio Jack.
Other features include a finger print scanner, 4G LTE with a download speed of up to 300 Mbps,bluetooth 4.0, Wi-Fi and Infra-Red port.
A device without a good battery backup is as good as  nothing, that's why the gionee m6 packs a non-removeable Li-Po 5000 mAh battery to give it user longer time of usage, the smartphone support fast charging technology  and reverse charging which means it can be use to charge other device.
Price and availability of gionee marathon m6
Gionee m6 is available in Nigeria, you can get it at leading online stores like jumia, konga and yudala.
Price of the device range between #120,000 to #150,000 depending on your location.