15 Patriotic Bollywood Movies that Every Indians Must Watch

If you are an Indian whether living in India or abroad then you should definitely watch these movies which will fill you with patriotism and love and praise for your own country own land own home.

A movie dedicated to the National Game of our country Hockey. It is a brilliantly made movie which has depicted our national game in a very beautiful way. It has given life to the game Hockey. It has rediscovered the game itself which has lost itself somewhere between other sports. The movie was directed by Shimit Amin and Rob Miller and was produced by Aditya Chopra with Shahrukh Khan in lead role. After the release the hockey girls were given the title of Chak De Girls. The music was given by duo Salim-Sulaiman and lyrics were penned by Jaideep Sahni

The movie was a major hit and earned 1.27 billion.

It is a movie truly dedicated to the love for ones own country. It is a nice movie and one of the finest perfomance by Hrithik Roshan and Preity Zinta. The director and team have given justice in making it.

LAKSHYA was directed by  Farhan Akhtar produced by Ritesh Sidhwani with Hrithik Roshan and Preity Zinta in lead roles.

It is a movie which symbolises the struggles and sacrifices made by our soldiers in protecting our motherland whether day or night in sunshine in storm in rain in snow.It depicts how the soldiers live at border leaving behind their families for their country for its protection.

The movie is directed and produced by J.P.Dutta with a bunch of actors like Sunny Deol, Sunil Shetty, Akshay Khanna, Jackie Shroof, Kulbushan Khurbanda, Puneet Issar in male leads and Pooja Bhatt, Raakhee and Tabu in female leads. The music given by Annu Malik and lyrics by Javed Akhtar.

The movie was well received by the audience as well as critics. It had a Box Office collection of 610 million. It won 3 National Awards and four Filmfare Awards with other Starscreen Awards.

The movie was directed and produced by John Matthew Matthan with actors like Aamir Khan, Naseerudin Shah, Nawazuddin Sidiqui, Sonali Bendre in lead roles. The film was not only successful at the box office but was also appreciated by audience and the critics. The music was given by Jatin-Lalit and background music by Sanjay Choudharylyrics by Sameer. It has one National Award and four Filmfare Awards to its credit.

It is a movie truly dedicated to the glorious work done by Police Officers everyday at everyplace. Khakee means The Brown Uniform in English. The movie was directed by Rajkumar Santoshi and produced by Keshu Ramsay with Amitabh Bacchan, Akshay Kumar, Ajay Devgan, Aishwarya Rai in lead roles.

It was critically acclaimed by everyone. The music was given by Ram Sampath and lyrics by Sameer. It was nominated four times in Filmfare Awards. 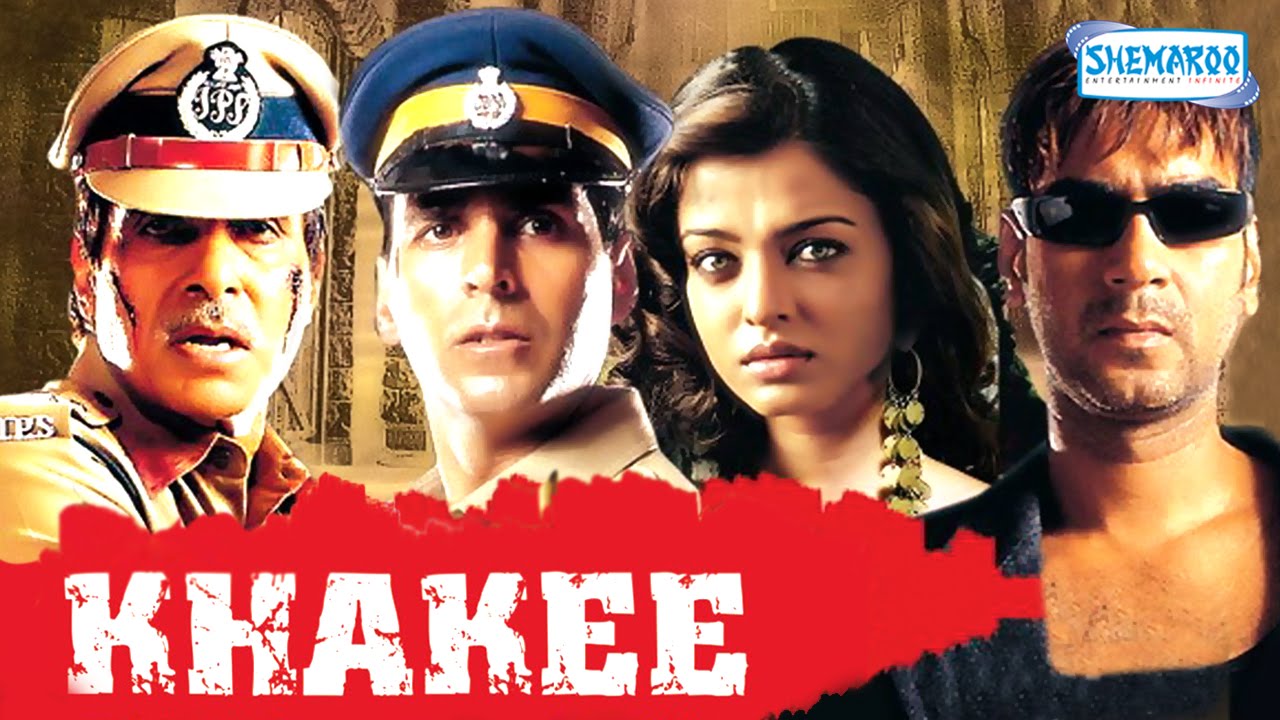 Yet another India war movie by J.P.Dutta which has running time of 255 minutes making it one of the longest Indian films ever made and fifth in terms of running time.  The film is based on the Kargil War which was fought in between India and Pakistan.The film is also based on the 1999, Operation Vijay and Battle of Tolling around the Line of Control. The film directed and produced by J.P.Dutta received a mixed response critically and commercially upon its release.

Another patriotic film which will fill everyone with patriotism and pride for our own country. It shows the two sides of a coin one wants to destroy the country and another duo wants to save the country from the clutches of destroyer. Tirangaa means Tricolour in english. The film was directed and produced by Mehul Singh. It was written by K.K.Singh. The film has megastar like Raaj Kumar ,Nana Patekar in lead roles accompained with Mamta Kulkarni, Deepak Shirke, Manohar Singh, Varsha Usgoankar.

The music was given by Laxmikant Pyarelal and lyrics pennned down by Santosh Anand. The movie was a blockbuster hit at the box office.

In English it means “We entrust this nation in you, O countrymen” .The film is directed and produced by Anil Sharma. It has actors like Amitabh Bachchan, Akshay Kumar, Abhay Deol, Divya Khosla Kumar, Sandali Sinha and Nagma in lead roles. The music is given by Anu Malik and lyrics by Sameer.

It is a movie truly highlighting the true patriotic feeling for your own country. A true patriot will neither do anything wrong nor will let it happen.The movie potrays what is Patriotism in true and real sense.Though it was declared a flop at Box office then also one can watch it.

It is a movie based on the life of Mangal Pandey an Indian soldier known for helping to spark the Indian Rebellion of 1857 or First War Of Independence. The film was directed by Ketan Mehta and was produced by Bobby Bedi, Ketan Mehta and Deepa Sahi. The film had actors Aamir Khan, Rani Mukerji, Toby Stephens, Ameesha Patel, Kirron Kher, Coral Beed in lead roles.The music was given by A.R. Rahman and lyrics were penned down by Javed Aktar. The movie got positive reviews upon its release and collected 85 crores at the box office. It also brought pride and prestige not only domestic but also internationally.

11. HOLIDAY: A SOLDIER IS NEVER OFF DUTY

Directed by A.R. Murugadoss and produced by Aruna Bhatia, Twinkle Khanna and Vipul Shah. It had actors Akshay Kumar, Sonakshi Sinha, Summet Raghavan, Freddy Daruwala in lead roles. The music is given by Pritam and lyrics by Irshad Kamil. The movie was a superhit at the box office and collected 176 crores with a budget of 86 crores. A must watch movie for people who have immense respect for the real heroes of the country who safeguard our country everywhere wherever they are.It does not affects them where they are. They are always ready to protect us from everyone who tries to destroy our country with ease. They are our soldiers our army men who put their duty before everything else.They are the people who can go to any extent when it comes to safeguarding their motherland and its people. They live for the welfare of the country and die for their country.They are never off duty.It does not matter whether they are in their uniform or not.They are always there to protect our country.

Directed by Raja Krishna Menon and produced by Nikhil Advani and Aruna Bhatia. It is based on 1990 airlift of Indians from Kuwait. It has actors Akshay Kumar and Nimrat Kaur in lead roles. The music was given by Amaal Malik and Anki Tiwari, Lyrics by Kumaar.

On the whole, Airlift is a classic film based on a real-life incident that is told extremely well on screen. It is surely one of the best films ever made. The movie was a massive hit and collected 231.6 crores est.

Directed by Rakesh Omprakash Mehra and produced by Ronnie Screwvala and Rakesh Omprakash Mehra. The movie had Aamir Khan, Siddharth Narayan, Atul Kulkarni, Kunal Kapoor, Sharman Joshi, Alice Patten, Soha Ali Khan, R. Madhavan, Waheeda Rehman in lead roles. Music was given by A.R. Rahman and lyrics penned by Prasoon Joshi and Blaaze, an Indian Rapper. It earned 920million at box office making it a blockbuster hit. It won many awards Filmfare, IIFA Awards, 53rd National Film Awards. Many movies might come and go but it will be always a hit.It has a special place in our hearts. It is definitely a must watch for very Indian.

In 1962, free India faced her first war (with China) and Chetan Anand made this momentous but fairly dark and realistic saga honouring our soldiers and martyrs. Despite a top cast and cult songs like Ab Tumhare Hawale Watan Saathiyon, the film did not become a box office bonanza but remains the best war film we have ever made.

The common man is the most troubled by terrorism today, and this stunning drama showed how he could himself take some action against his nation’s enemies rather than only relying on the law and the soldiers to help him or prevent danger. This film was such a huge hit that it inspired an official remake in Hollywood – A Common Man, starring Sir Ben Kingsley.

15 Patriotic Bollywood Movies that Every Indians Must Watch