Top 10 Programming Languages to Watch Out for in 2019

How to Decide Which Programming Language to Consider in 2019?

As the web and mobile solutions are becoming an indispensable part of every business, the programming world is also growing at a faster rate than ever before.

While on one hand, various new technologies and languages are getting into the limelight for making the different development processes more efficient. Whereas, on the other hand, many existing web and app development technologies are disappearing from the graph.

How To Find Your Purpose And Passion …
Charles Hoskinson declares the arriva…
Content is King and a Multilingual Bl…
Why Christians Need to Become Mature …
Google News: Learn how to do SEO for …

In a scenario like this, keeping yourself updated with what’s the most popular programming language/s is necessary for both the developers and businesses to build profitable solutions.

Taking the same thought forward, here we have created a list of Top 10 Programming Languages for 2019, just as we covered last year in the listicle on the top 10 programming languages for 2018.

So, let’s begin with the first.

Being one of the most in-demand programming languages for 2019 and beyond, JavaScript holds the first position in this list.

As per the StackOverflow’s annual survey of 2018 , 69.8% of developers employ the language to build interactive web pages, exhibit dynamic content and make the transition from web to the mobile platform. 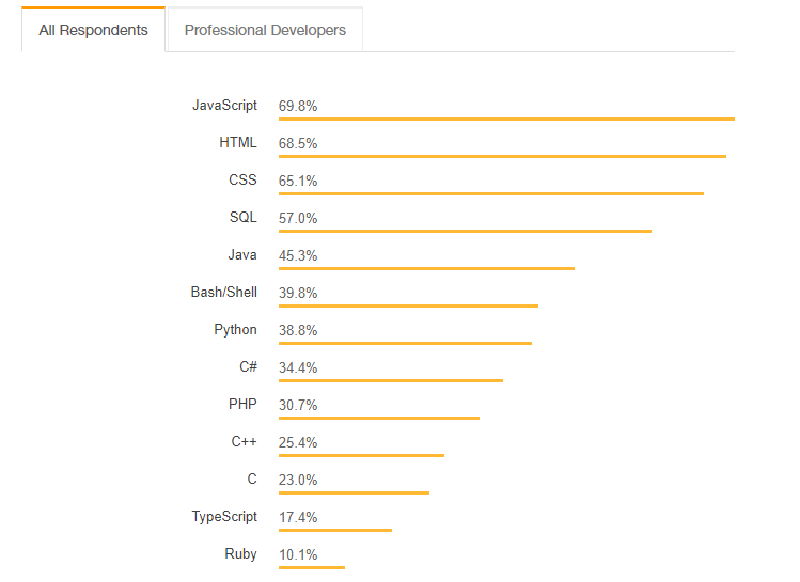 Besides, the language also provides developers with an exquisite collection of frameworks as shared in our JavaScript framework guide which increases its popularity in the market and makes it the right fit for Linux, Mac OS X, SunOS, and Android.

Python, which received the recognition of ‘Programming Language Hall of Fame’ by TIOBE Index last year, has also proven to be one of the future proof programming languages with no sign of disappearing. 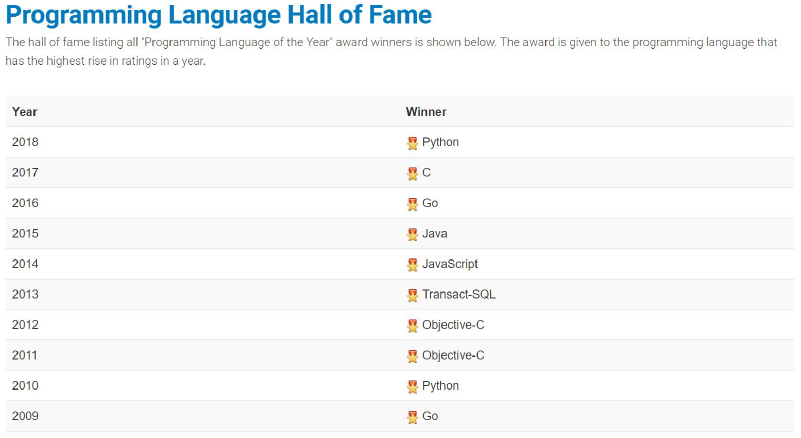 The language is used for creating scalable web solutions due to its characteristics such as easy-to-use, fast and easy-to-deploy, which made it the right tech stack for YouTube, Survey Monkey, and Pinterest.

Besides, it is also considered a prime choice for the sophisticated deep learning and machine learning app development processes.

Just like Python, Java is also one of the top 10 most popular programming languages of 2019. It is mainly used for developing Android-based mobility solutions. But, it is also considered by Enterprise app development companies because of its impressive features like ease of use, enhanced performance, higher productivity, improved polyglot programming, etc.

From the day Kotlin was introduced as an official Android app development language, the language has enjoyed a skyrocketing rise in its popularity. It has not only become one of the top ten best programming languages but also found a place among the most loved languages by developers. 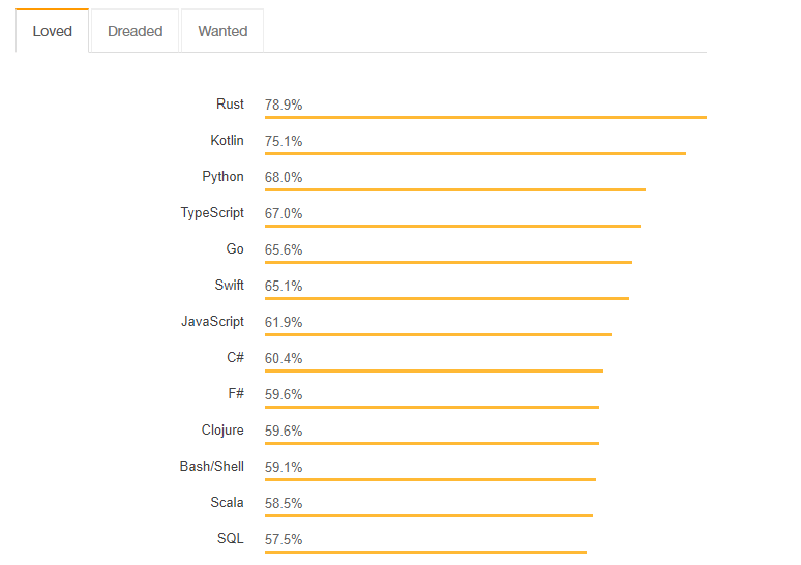 One of the biggest reasons behind this popularity is that it gives Android app developers an escape from the drawbacks of Java, and offers the feature of interoperability with Java codes, which also acted as the catalyst of making a number of famous apps migrate from Java to Kotlin.

Swift, introduced back in WWDC 2014, has also entered into the list of top trending programming languages for the year 2019 with a steep rise in its popularity as noted in the Google Trends graph below. 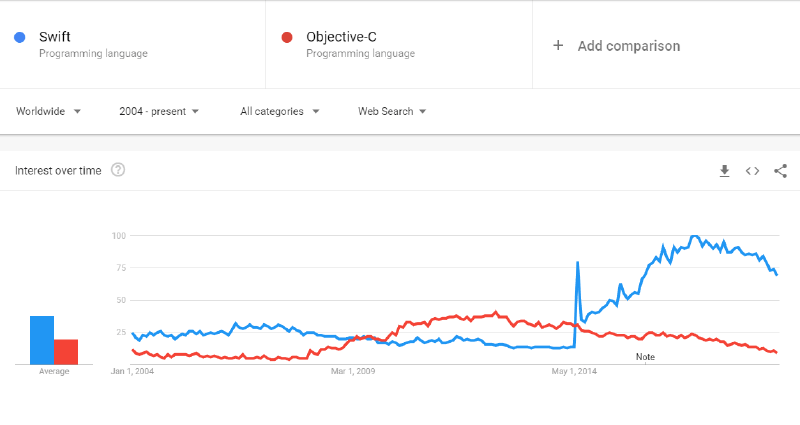 The programming language is faster, easy to learn, secure, and has various other features that make Swift supersedes languages like Objective-C for developing apps for iPhones, iPads, and macOS.

Since the day Swift was introduced as an official programming language, various developers have turned to converting Objective-C app into Swift. But, it is still one of the top used programming languages for iPhone application development because of its immersive ability to employ compilers and syntaxes based on different C-based languages.

C, also called the backbone of the software world, is still one of the top programming languages to learn this year. It gives deeper insights into how software actually functions on machines and thus, is used for building embedded systems and VR-based apps.

Besides, it delivers high-end performance, reliability, and variety of context: making it the first choice of reputed brands including Oracle, Microsoft, Adobe, and Paypal.

Despite the competition from different server-side environments like Node.js (as covered in our ‘Node.js vs PHP’ blog), PHP remains the star of the sector. Thanks to its impressive frameworks like Drupal and Laravel which are used by developers for scalable and robust apps and the fact that 83% of websites on Internet are based upon PHP, it has displaced R language in the Top 10 most used programming languages list for 2019.

Though various database technologies exist in the IT industry, SQL (Standard Query Language) is still one of the top programming languages in demand. It is simple, reliable and offers exclusive database management services to business developers.

MATLAB, the proprietary language of MathWorks, has also landed into this list of top programming languages.

While these were the Top 10 Programming Languages for 2019, there are various other languages that are gaining huge momentum in the mobile industry and are supposed to join the league. Some of those prominent names are:-

Another language that might enter into this list of Top 10 programming languages of the future is Scala. The general multi-purpose language has reached to 28th position as recorded in TIOBE Index for January 2019 from 34th position noted in April 2018.

Besides, it lets you enjoy the perfect blend of Functional programming and Object-Oriented concepts and is showing a considerable elevation in its popularity (as you can see in the image below), which again indicates that overlooking the language would be unfair. 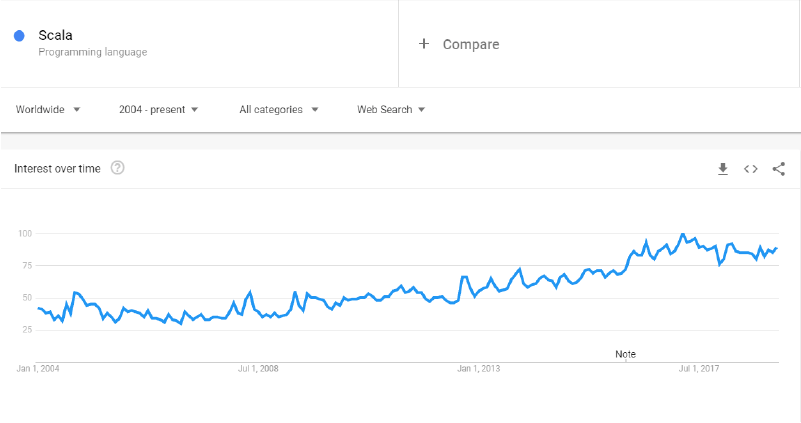 Ruby is yet another most-loved, easy-to-use and user-friendly programming languages used for web development. It offers exclusive features like writing fewer line of code, getting sound community support and associated with top tech brands like Twitter, Shopify, Airbnb, and Bloomberg. 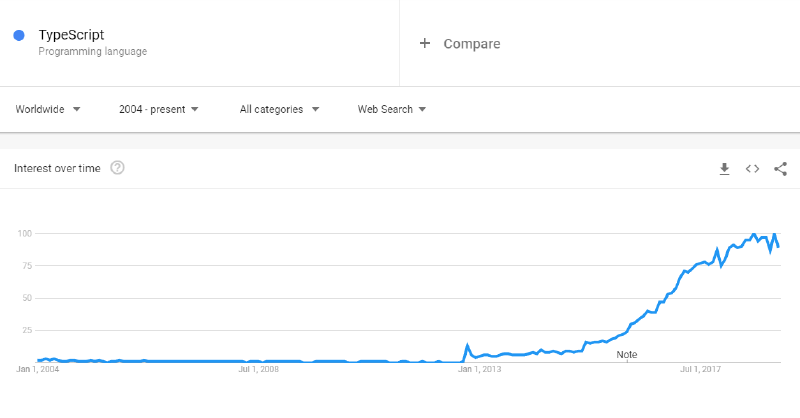 With such potential, it is gaining the attention of various reputed brands in the market, with one of the brands being Google itself.

Google considered TypeScript for its frontend development framework, Angular which helped to add a competitive advantage against React as we observed in our blog, React vs Angular: What to Choose for Your App.

Also known as “Golang”, the programming language will also make its way to enter the top web programming languages list this year. And this will all be possible because of its concise and easy-to-embrace syntax and faster compilation characteristics that makes it favourite of SoundCloud, Google, Netflix, and other such popular brands.

Let’s us help you pick the right programming language.

How to Decide Which Programming Language to Consider in 2019?

The decision of which programming language to choose majorly depends on three factors, namely:-

The main reason why you want to develop an app is helpful in picking the right language.

Are you developing a native mobile app or investing in Cross-platform app development? Are you looking for an open-source or licensed option? What type of technologies and features are you planning to introduce to your app development process? What level of security do you want to add to your mobility solution? These questions will help you to understand the technical requirements of your business app solution and thus, select the best programming language.

For example, suppose you want to build an app based on the Machine Learning concept. If you are looking for a programming language with years of existence, Python is the right choice. But, if you are ready to go with a newcomer based on the options it avails, TypeScript is apt for you.

Likewise, if you are planning for making your app available only on iOS, choosing Swift is a good decision. But, when it comes to making an app for both iOS and Android, going with JavaScript is a profitable deal.

If you choose a programming language out of this Top 10 Programming languages list that they have expertise in, you’ll experience a smooth app development experience. Your app project will face lower challenges and reach to the market at the earliest.

But, on the flip side, the app development timeline might increase, hidden costs would more often be added to the overall app cost and your app might fail to take the best advantages of the chosen language if they do not have a sound knowledge of the language you choose.

With the aforementioned factors and knowledge of the top 10 Programming Languages for 2019, we hope that you will find it easier to take the right decision and build a successful approach to enter the mobile market. But, in case you encounter any challenge, feel free to contact our tech experts.

The post Top 10 Programming Languages to Watch Out for in 2019 appeared first on Appinventiv Official Blog for Mobile App Development.

Top 10 Programming Languages to Watch Out for in 2019