Alonso The Hero As Chelsea Down Arsenal 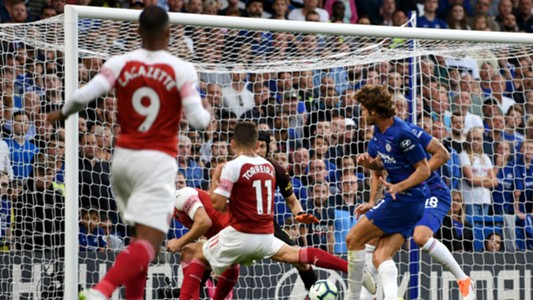 It was an interesting game at Stamford Bridge when Chelsea took on Arsenal The North London side desperately needed to bounce back with a positive result but have struggled in recent history at Stamford Bridge.

Chelsea started the scoring at the ninth minuite after the Arsenal defence gifted Alonso the time and too much space to cut a brilliant ball across the face of goal to Pedro who tucks home beyond Cech.

Arsenal had the opportunity to pull level at the 19th minutes through Aubameyang the Garbon striker but the Gabon striker fires over the bar despite the goal being wide open. After that awful miss, Morata added a second for chelsea at the 20th minutes with yet another awful defending from Arsenal defenders.

Arsenal pulled one back at the 37th minutes through H. Mhikitaryan after the ball deflected into the part of Arsenal star man who strike a low shot from outside the area that kepa gets a hand to but cannot keep out.

H. Mhikitaryan bounced back to provide a goal and a assist to draw level with chelsea at the stamford bridge afterdrilling a ball across the face of goal that Iwobi latches onto and fires past Kepa.

M. Kovacic made his debut for chelsea after replacing R. Barkley and Hazard replacing willian

Chelsea hardwork paid off at the 81st minute after a sluppy from Lacazette which the ball away and Hazard took advantage, cutting a ball into the middle that Alonso tucks home.

And that decisive goal made it two wins from two under Maurizio Sarri and keep the Gunners waiting for their first Premier League point under Unai Emery.

The post Alonso The Hero As Chelsea Down Arsenal appeared first on NBAZE.COM.

Alonso The Hero As Chelsea Down Arsenal