How To Take A Screenshot On Windows 10 : 5 Simplest Ways Step By Step

Screenshots are quite handy for many purposes. If you want to create a how-to tutorial then you can take screenshots of the process, or if you are facing problem in some code or something them also you can take the Screenshot of it and send it to your friends or the teacher to ask for the solutions of it. Sometimes we need to insert screenshots in our projects and presentations. Not only these but there are many uses and requirements of screenshots.

Why SEO Is The Next Big Thing in the …
جمہوریت ڈرامہ
React JS, Node JS & Angular JS: Which…
Zanten – Bique Mix

How to Take a Screenshot on Windows 10

1. Steps to take screenshot on Windows 10 by Using Print Screen

One of the easiest methods to take a screenshot on Windows 10 is by using Print Screen (Prnt Scrn) key. This method is the most common method to take screenshot not only Windows 10 but in the older versions of Windows too. Before taking the screenshot, make sure your screen contains only required items. Close extra tabs and applications. So, the step for taking screenshots in Windows 10 b using Prnt scrn key are as follows: 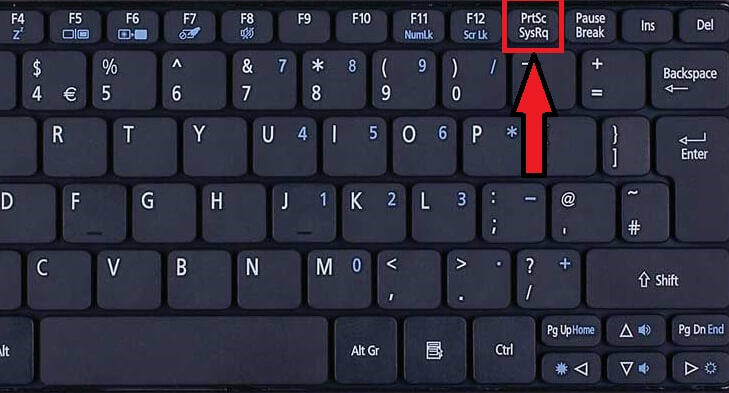 Well, it is not necessary that Print screen will be written as Prnt Scrn on every keyboard but it can also be written as Print Scr or PrtScn. So, find the print screen button on your keyboard ad then press it. Most of the times, you can find this key along the function keys(f1-f12) on the top of keyboard.

Some keyboards also contain Fn key in them. If your keyboard of your PC or Laptop also has Fn key then only pressing Print Screen will not help, instead, you will have to press Fn+ Prnt Scrn to take the screenshot of the whole screen. 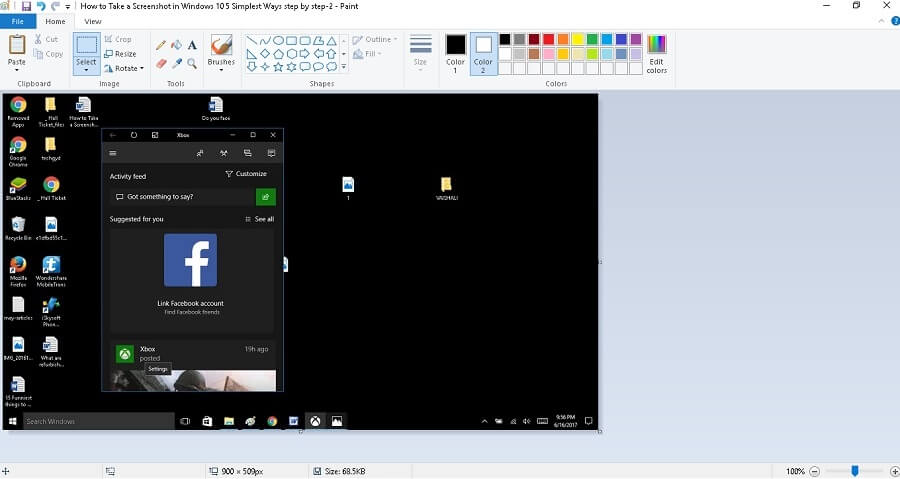 III. Save the screenshot

Now, your screenshot is ready to be saved so that you can use it anywhere wherever you want that screenshot. For saving the screenshot just click on the file button available at the top left corner of the Paint window. It will provide you sub menus there, you need to select the  Save as option, click on it, give your file a name and save it.
How To Change Default Location Of Screenshots In Windows 10/8 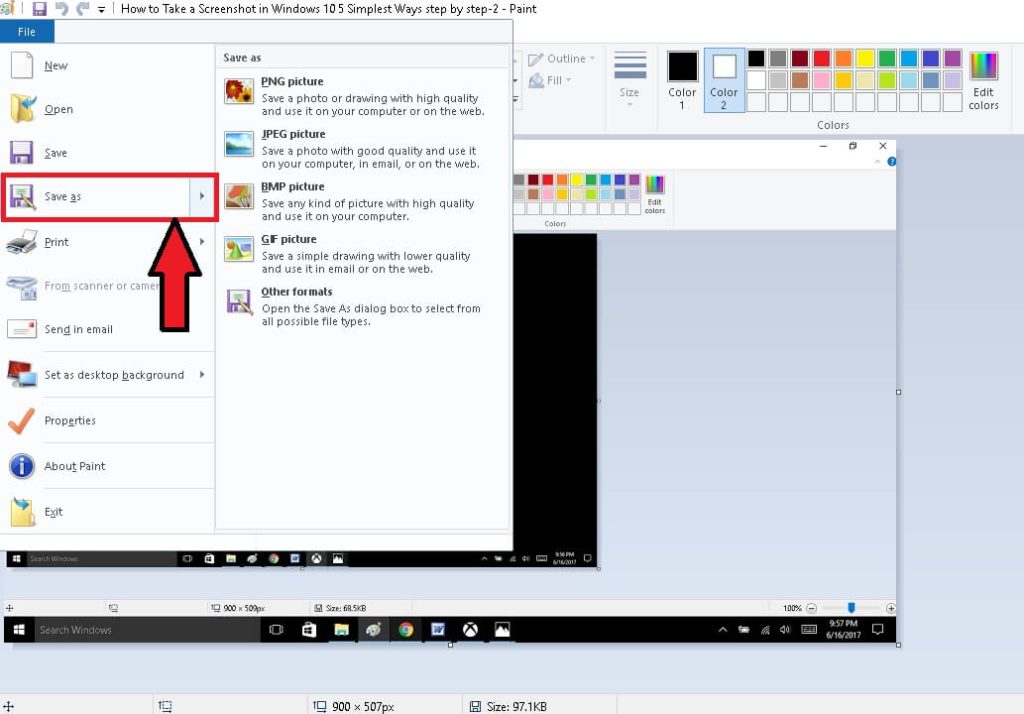 After that, just name the screenshot and choose the file format in which you want to save it and then click Save button. The screenshot has been taken and saved successfully.

Note: This method was to take the screenshot of the whole screen. It will capture each and everything that is on the screen. If you want a part of screen then crop it using the crop tool of paint or any other image editing tool. Or move to the next method.

2. How To Take a Screenshot on Windows 10 by using Alt+Prnt Scrn

This process also goes same as the previous one. But instead of pressing just Prnt scrn, you need to press Alt+Prnt Scrn. But before doing the same first you need to make sure that the opened window of which you want to capture the screenshot is above all of the content means it should be the active one. Then only you will be able to take the screenshot of that program. 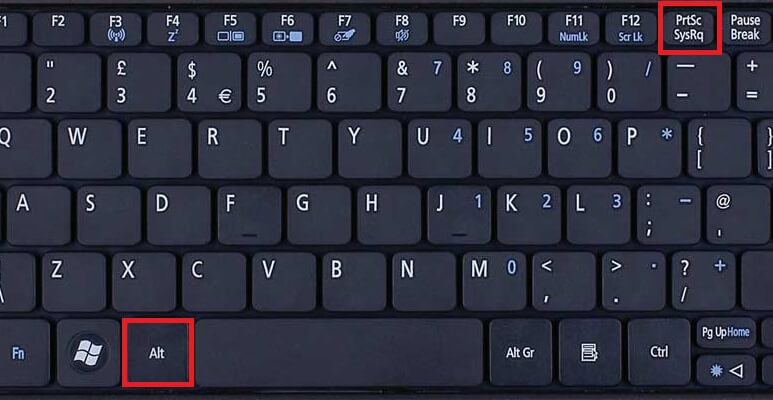 So, open the app or program of which you want to take the screenshot and then simply press Alt+Prnt scrn. The screenshot of that window will be captured and copied to the clipboard immediately.

Also, if your keyboard contains Fn key then press Fn+Alt+Prnt Scrn to take the screenshot of the active window in Windows 10. 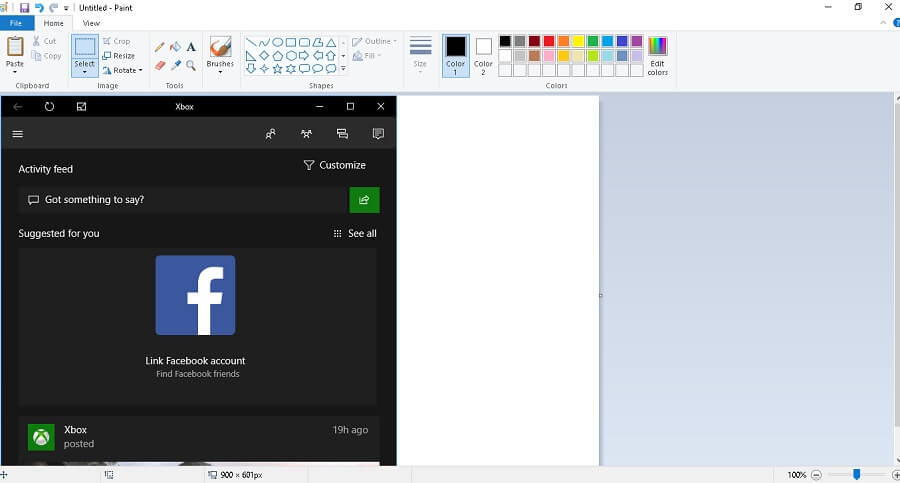 Save it from the file option by selecting save as option. You can save the screenshot in JPG, PNG or any other photo file format of your choice. 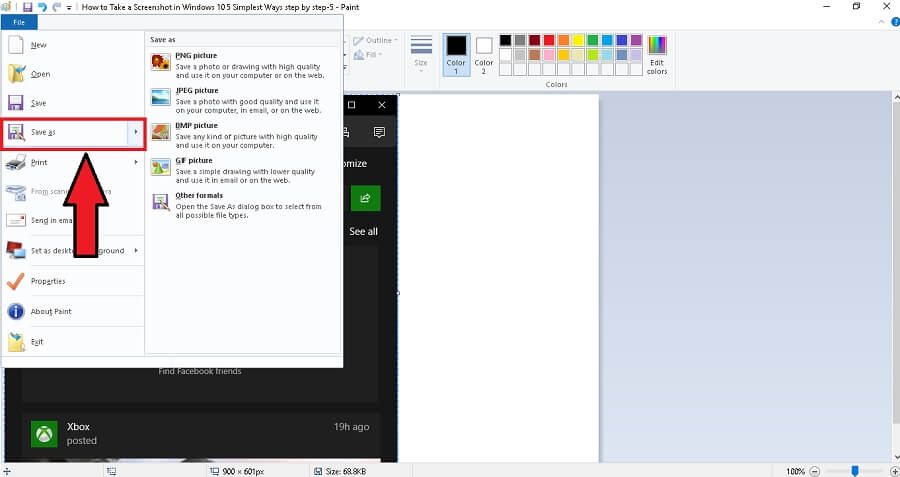 3. Steps to take screenshot on Windows 10 by Using Snipping Tool

In the previous method, we were using the combination keys to take a screenshot on Windows 10. But now will be using a tool named Snipping Tool for taking the screenshots. So, let’s start the process.

I. Open the Snipping Tool

First of all, you need to open the Snipping tool. So, for the doing the same in Windows 10 just open the Cortana or search menu and then type Snipping Tool. In the search results just select Snipping tool to run it. 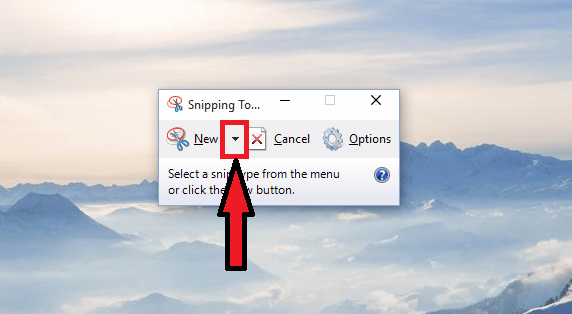 II. Select the shape of the snip

After Snipping Tool has been opened, you need to select the shape in which you need to take the screenshot. So, click on the arrow button available besides the New Button as shown in the image and then choose the desired shape. By default rectangular shape is selected. 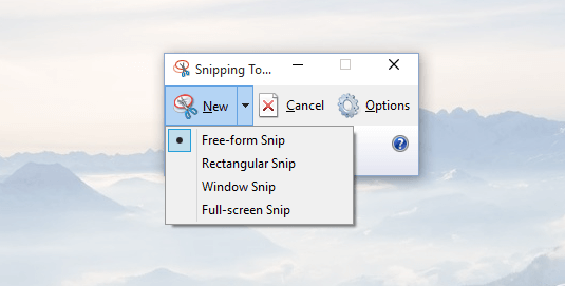 There you will get 4 options which are as follows:

Rectangular snip: This option lets you select the area of which you need to capture the screenshot. You can select any part of the screen by using this option.

Free-form Snip: With the help of this tool you can select the area in any shape and it will capture the area inside the shape only.

Window-snip: This snip option will enable you to capture the screenshot of the active window only.

Full-screen Snip: As the name suggests, this option will capture the screenshot of the full screen.

So, basically with the help of this single Snipping tool, you can capture any kind of screenshot of any shape on your Windows 10 PC.

Once you have selected the shape of the snip, its time to adjust the border. Adding a border to the snippet is not compulsory here. But by default, there will be a red colored border. If you want to change the color just select the snipping tool option and then change the color of the border under Ink Color Option. If you don’t want to put the border around the screenshot then disable the border option by unchecking the option “Show select ink after snips are captured” and the border will be removed.

Now, it’s time to create a new snip for taking a screenshot. For doing the same, just click on New Button which will start the selection and you can draw the snip area of your choice. But if you selected the Full-screen snip option, then the screenshot or snip will immediately be created of full screen after you click the New button.

After creating a new snip, a window will be opened and you can draw the snip area just by using pen too. You can also highlight the text if you want. 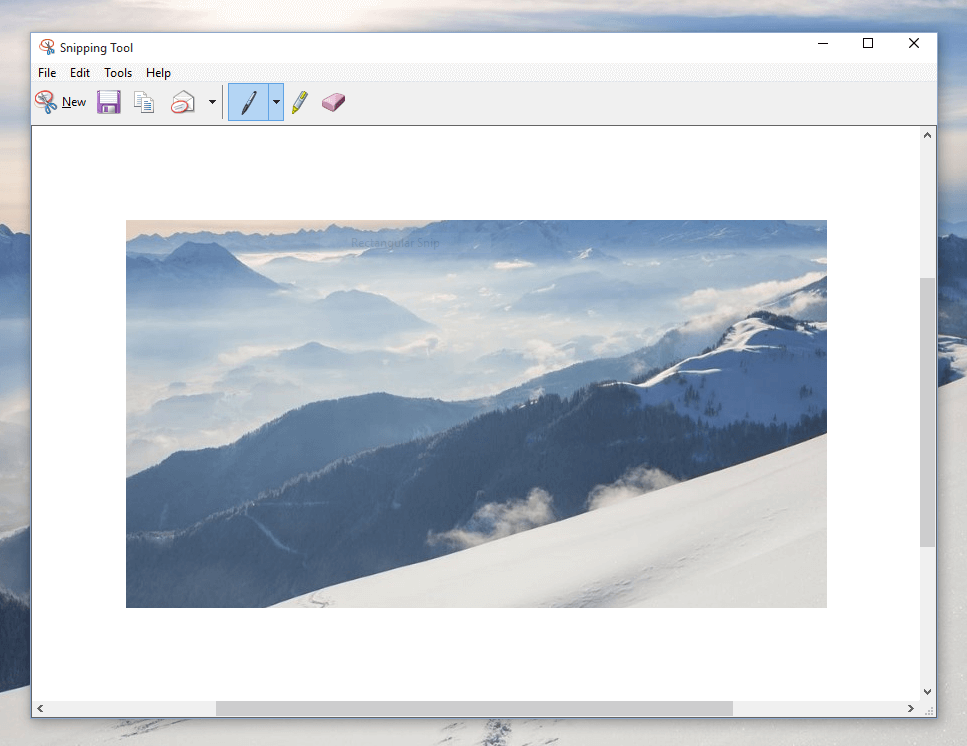 VI. Save the snip 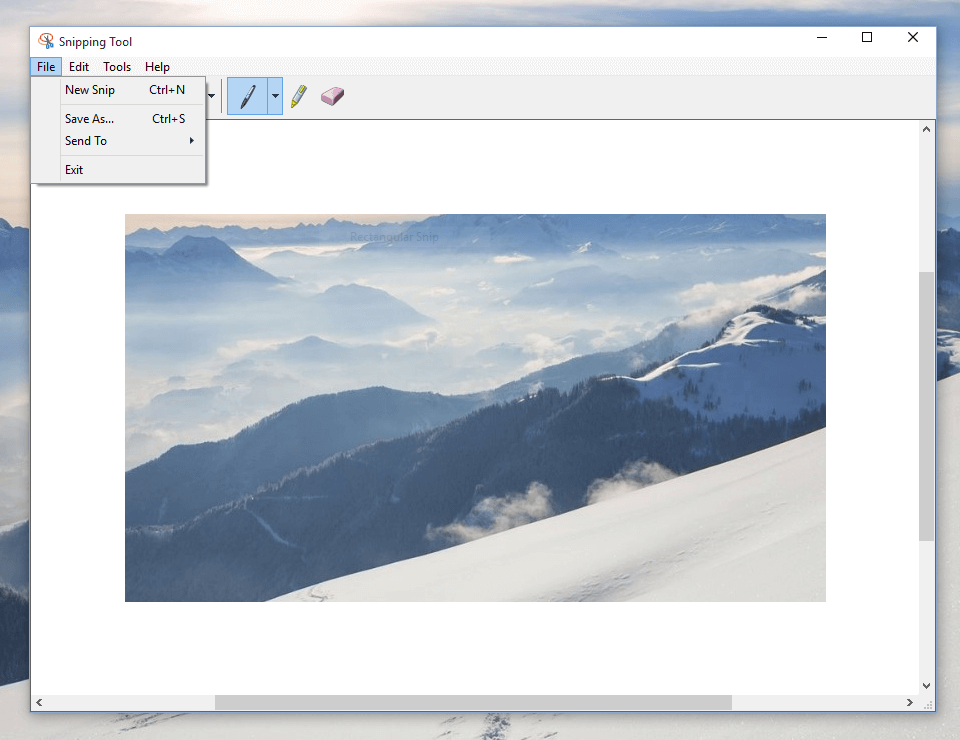 You can also paste the snip on Paint etc. after you created one. Because when you create a new snip it automatically gets copied to the clipboard. 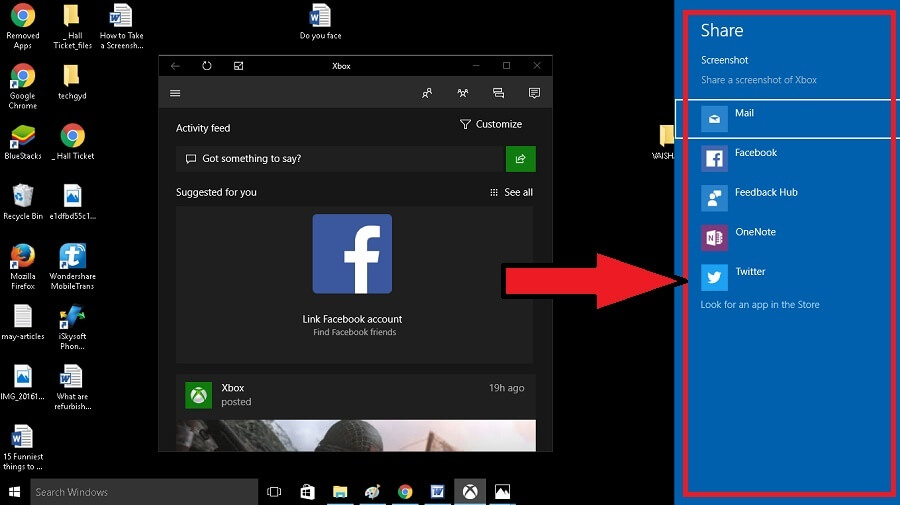 5. Steps to take screenshot on Windows 10 by Using Game Bar

The last method for taking a screenshot on Windows 10 is by using the Game bar. With the help of Game DVR in Xbox app provided by Windows 10, you can take screenshots. But before you take a screenshot by using this method, you will need to sign to the Xbox app by using Microsoft account. 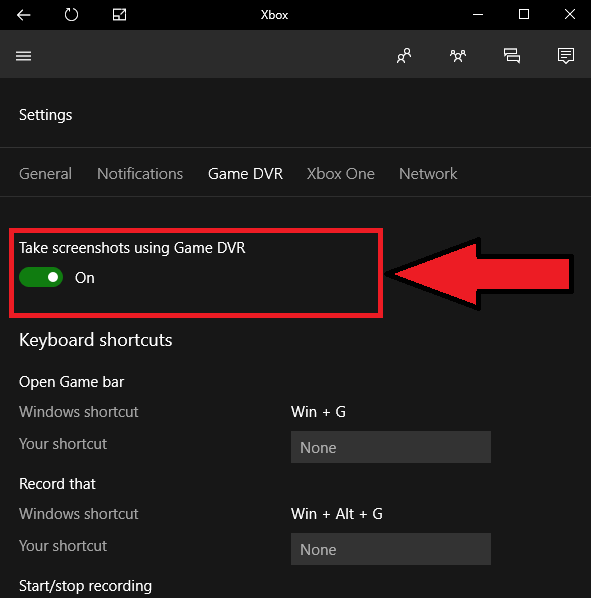 After signing in, click on the settings button and then under section Game DVR just enable the option to take a screenshot using Game DVR. 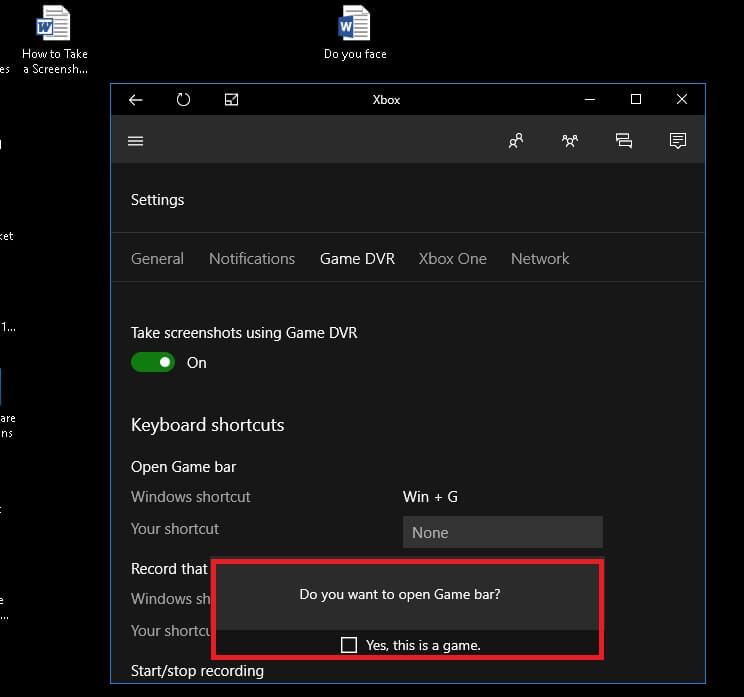 Now whenever you want to take a screenshot, just press Windows key+G and a popup box will open up. Check the option”yes it is a game” and after that, you only need to click the camera icon. The screenshot will be saved in the path C:\Users\”Your username”\Videos\Captures and a notification will also show up after the screenshot has been saved. 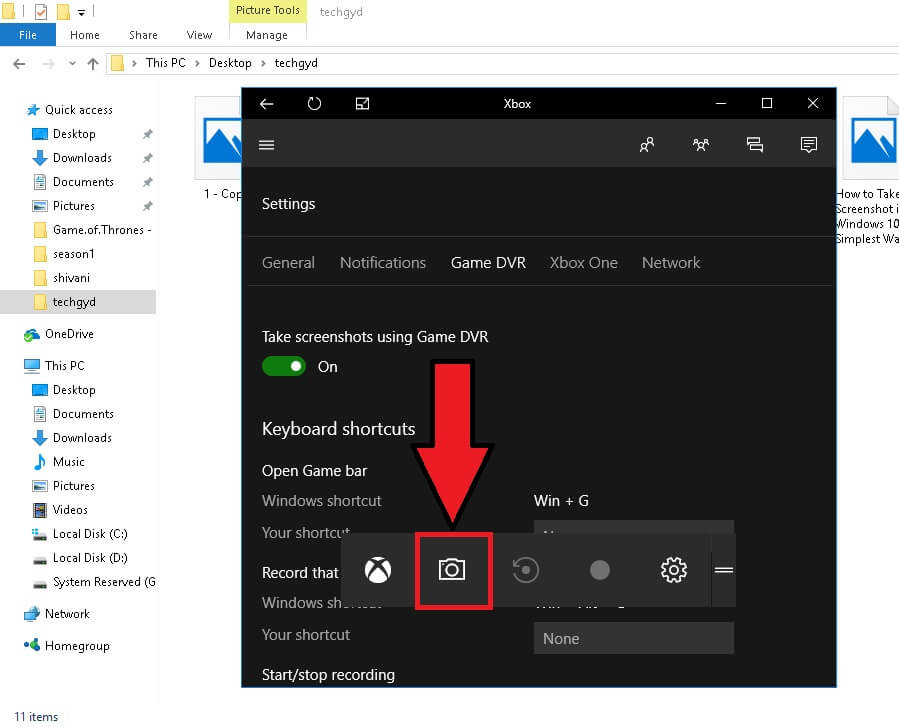 So, these were the 5 easiest methods to take a screenshot on Windows 10. This step-by-step guide will surely help you to take screenshots on Windows 10 PC with ease.

Read Full Article Here - How To Take A Screenshot On Windows 10 : 5 Simplest Ways Step By Step

This post first appeared on , please read the originial post: here
People also like
Why SEO Is The Next Big Thing in the Real Estate Industry
جمہوریت ڈرامہ
React JS, Node JS & Angular JS: Which One is The Best For Web Development?
Zanten – Bique Mix

How To Take A Screenshot On Windows 10 : 5 Simplest Ways Step By Step