Tech giant Sharp has announced that its worlds first 8K TV set will hit the market starting from next month. The TV is scheduled to by released as follows, China in October, Japan in December, Taiwan in February 2018, and in Europe in March 2018. Known as SHARP AQUOS 8K, the device comes with a screen resolution of 7,680 × 4,320 pixels has supports for H.265 playback, and it features four HDMI ports and two USB ports. 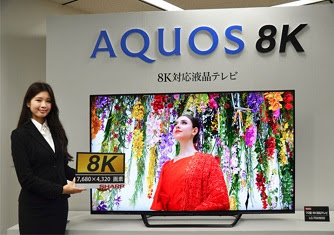 The TV has Yamaha Audio Engine, and DTS 2.0 technology, three groups of speakers built into the SoundBar work with two groups of woofers and four high-power speakers with optimal back bass sound installed behind the TV. It also features Dolby Vision HDR and BDA-HDR offering  brighter and more vivid colors and the panel has Dynamic Highlight display