Tags: broadband malaysia broadband service
December 24th 2008
View original
Malaysia has a vision. Its vision is to have at least 50% of the population use Broadband by the year 2012. Will it come true? I doubt so.

Malaysia is only second to Singapore in internet penetration in ASEAN. Currently, almost half of the Malaysian community is online. But those who use broadband is only a mere 7%.

Why might you ask? Well for one, the price. Internet usage is not cheap in Malaysia. For a 1M service you have to pay a minimum of RM 99. Compare that to Singapore where you only pay half of that for the same speed.

In addition, the Malaysian telecom market is dominated by one telco, Telekom Malaysia. They hold 95% of the country's service line. That's why in Malaysia, other telcos are offering Wireless broadband for obvious reasons of course. But in my opinion, these competitive telcos do not have a stable working network and most of them are quite new.

Maxis for example. So many complaints have been made by users using their Broadband Service. I mean they cap the bandwidth to only 5gb a month! Seriously! And the speed you get is only 384 kbps. That's like OMG so effing slow!

The latest company to offer a broadband service here is P1 Wimax by Green Packet. So far, they have lived up to their so called expectations. How do I know? Because I subscribe to it. The only problem that I have is their latency and network stability. It takes longer than normal for a webpage to respond but the loading itself is extremely FAST! Better than Streamyx I might add. The speed that I get is almost constant; around 1300 kbps. That's more speed than what I paid for. So I'm really hoping that their service will workout. But again, the price is a weee bit expensive. RM 99 for the 1.2 Mbps package. I know they're new and all but come on! Plus you have to pay RM 999 for the modem.
List of how much the world is paying for internet broadband. 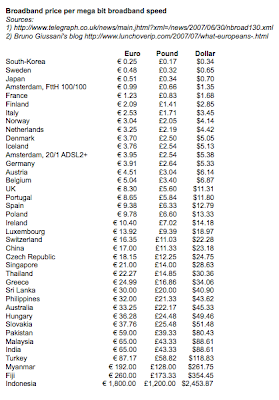 This post first appeared on Toys, Technology And Techno - T-Cube, please read the originial post: here
People also like
5 things to look for when shopping for Australian jewellery
What We Learned from the IIA’s Webinar on Broadband Affordability
Discover the Magic of Venice in November
Canadian Online Casinos at its Best
Burrow Has The Perfect Pillow For Every Person In Your House
Karen Wiesner: The Stories Behind Classic Fairy Tales (Woodcutter's Grim Series), Part 2
How to Make the Most of Your Clinical Physician Job…
Matelas mousse HR grand confort très ferme 5 zones
What Is the Worst Credit Score?