Can AI predict when that new hire will quit? 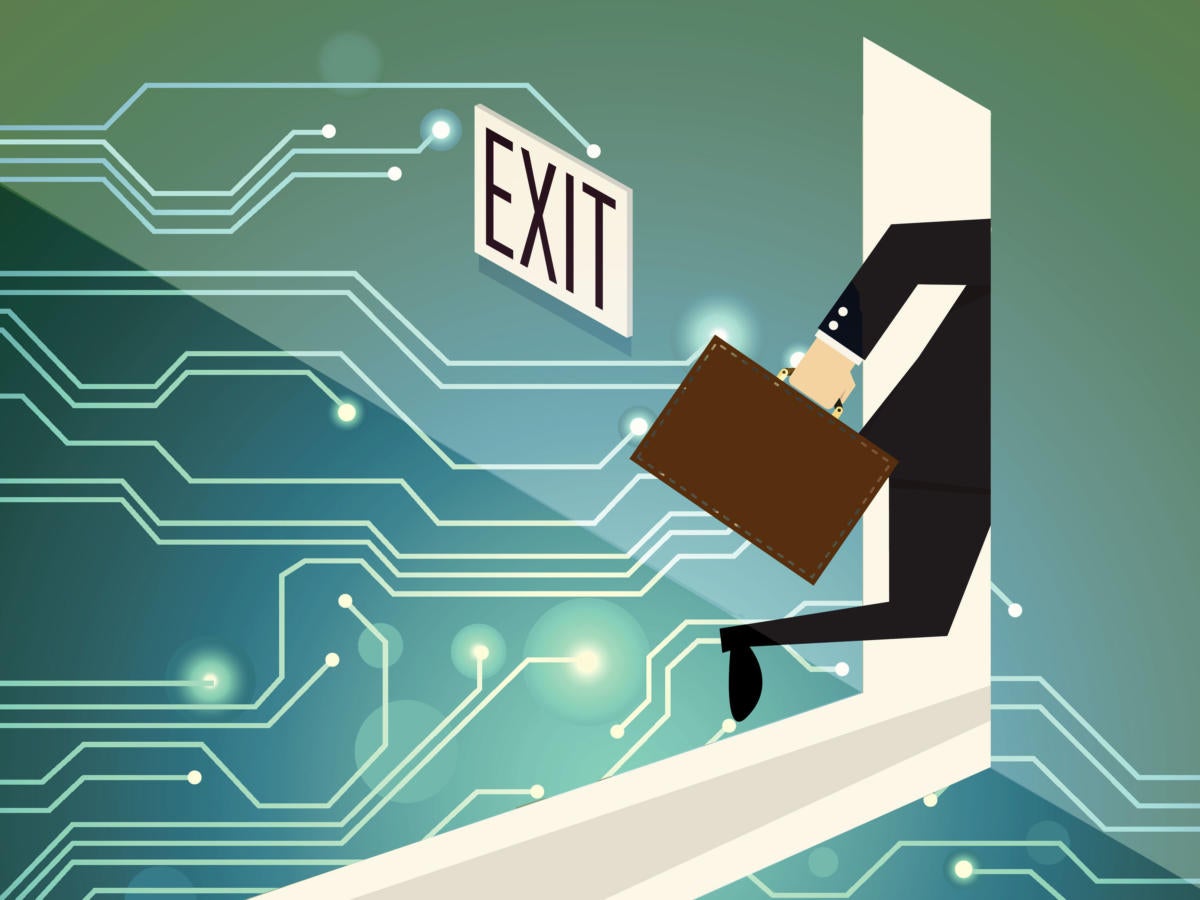 “The No. 1 most important data set to look at that predicts turnover more than any other time and again is reference response rate,” Bixler says. “The data conclusively continues to come back in that how the references rate the applicant will in fact help reduce turnover and predict performance one year later.” The average SkillSurvey client sees a 35 percent reduction in turnover. For pattern matching to predict this, though, you have to use good patterns. At DocuSign, Senior Director of Recruiting Susan Ross says references must respond to SkillSurvey within two days or an applicant won’t get the job. Later than that, and internal matching shows they’re not the best hire. Never mind that there are lots of reasons references might not respond that quickly that have nothing to do with the candidate. This timeline is DocuSign specific, though, and Ross says it and other matching works

From functional to strategic: Enabling innovation

The best technology deployments are streamlined and fully integrated with other solutions and devices, and have the ability to empower a diverse Employee base to work strategically and collaboratively. Strategy plays an instrumental role in creating the right atmosphere for innovation. Adam Uzialko, in Business News Daily, writes: “The responsive workplace offers an opportunity to extend the office far beyond its walls and enable more complete remote collaboration. The potential for the responsive workplace to dissolve the traditional boundaries of the office could have an immense impact on employees’ attitudes and the quality of the work they produce.” Of course, the onus of making this work falls on business leaders. To improve engagement and promote innovation, Companies must take a hard look at how employees interact with the technology and tools at their disposal. Although today’s IT solutions offer significant potential, implementing ineffective or overly complicated technology can translate to a loss of productivity and further worker disengagement.

Is Batch ETL Dead, and is Apache Kafka the Future of Data Processing?

The old world typically consisted of operational databases providing online transaction processing (OLTP) and relational data warehouses providing online analytical processing (OLAP). Data from a variety of operational databases was typically batch-loaded into a master schema within the data warehouse once or twice a day. This data integration process is commonly referred to as extract-transform-load (ETL). Several recent data trends are driving a dramatic change in the old-world ETL architecture: Single-server databases are being replaced by a myriad of distributed data platforms that operate at company-wide scale; There are many more types of data sources beyond transactional data: e.g., logs, sensors, metrics, etc; and Stream data is increasingly ubiquitous, and there is a business need for faster processing than daily batches. The result of these trends is that traditional approaches to data integration often end up looking like a mess, with a combination of custom transformation scripts, enterprise middleware such as enterprise service buses (ESBs)

Many companies do not realize that they are sitting on a pile of bad or dirty data. This data contains a lot of missing fields, has wrong formatting, numerous duplicates, or is simply irrelevant information. IBM research estimated that the annual cost of bad data for the U.S. economy is a whopping $3.6 trillion. Still, many managers have certainty that they are sitting on a goldmine of data when in reality they have nothing valuable. I interviewed Sergey Zelvenskiy, who is an experienced machine learning engineer over at ServiceChannel, where he automates facilities management processes using artificial intelligence. We talked about common misconceptions when it comes to the good/bad data dichotomy and what companies should be focusing on when building AI products. As Zelvenskiy says, "The data that companies have may not necessarily be bad, it is just likely incomplete to solve the problem. There is a chicken and egg problem here.

Like any process or strategic approach, the field of DevOps is constantly changing. First emerging as a collective term nearly a decade ago, the DevOps field now embraces millions of software developers and entrepreneurs who have adjusted their teams and core philosophies to fall in line with the DevOps vision. However, these guiding principles are still evolving, and if you want to remain relevant and agile in 2018, you’ll need to evolve with them. There are critics who have argued that DevOps is a fad, or is more of a buzzword-driven rebranding campaign than a truly significant change in the industry, but there’s significant evidence to the contrary. The rise and continued success of SaaS platforms, increasing customer demands, and even the new perspectives of young developers are all pushing for DevOps to remain strongly relevant in business. The biggest transformation has been in how the term is used; rather than referring to specific roles, like “DevOps developers,” DevOps refers to a work culture that all individuals within it follow.

An innovative solution uses the northbound interface on the SDN controller to monitor a customer’s network for volumetric increases, and to then dynamically task redirection of flow on the southbound interface to handle the attack. Vendors like Radware, with experience in load balancing, WAF, and anti-DDoS provide the perfect backdrop to building such an elegant approach to the problem. Visualize this in your mind: External traffic is being managed inbound through your software defined data center with the usual assortment of internal destinations: websites, apps, endpoints, and so on. A DDoS attack suddenly builds up toward one of your targets, probably the website, and the SDN controller immediately flow-orchestrates the increased volume to a collection of sinks or scrubbers, while maintaining proper traffic flow to non-targeted entities. It’s important to provide detection and orchestration of security at scale, because we know that with the speed of attacks were seeing on the Internet, enterprise teams will need to rely on proper automation to keep their applications and systems up and running.

Do website design platforms pose too big a security risk?

“Generally, if a platform allows you to insert HTML of third-party scripts and iframes, it can be abused to serve a malicious code. However, we didn’t see serious massive attacks on those sites recently, but we have seen attacks on multinationals and their systems,” says Sinegubko. “In our experience, the main areas of abuse for small to medium-sized businesses are spam via custom templates and using ad-backed widgets. Otherwise, the hacks are not massive. However, if hackers find a vulnerability in the platform itself, that will allow them to modify any sites hosted there, we’ll definitely see massive attacks," he says. “On the other hand, such attacks can be quickly mitigated, as most likely they won’t require action from thousands of individual webmasters, but rather just a coordinated effort from the platform staff.” Ultimately, the consensus seems to be that security should take priority over customisability, and more should be done to educate SME owners of the exploits hackers can take advantage of.

The importance of taking a break

Scientists are discovering that Naps are Zambonis for our brains. They smooth out the nicks, scuffs and scratches a typical day leaves on our mental ice. For example, a University of California, Berkeley, study found that an afternoon nap expands the brain's capacity to learn and retain information. Other research has found that naps boost short-term memory, lift mood and increase feelings of "flow," that powerful source of engagement and creativity. Naps can also reduce our risk of heart disease and strengthen our immune systems. But these naps need not be as lengthy as a full-fledged siesta. The ideal naps – those that give us a boost without enveloping us in a haze of "sleep inertia" – are quite short, usually between 10 and 20 minutes. One Australian study published in the journal Sleep found that 10-minute naps had positive effects that lasted nearly three hours.

A significant issue regarding SDN security is that virtualizing every aspect of the network infrastructure increases your attack footprint. The SDN controller is typically the primary target for attackers because it is the central point for decisions in a network and a central point of failure. Attackers can try to get control of the network by breaking into a controller or pretending to be one. Once a central controller is compromised, an attacker can gain complete control over your network. This would be considered an extreme scenario, but it could be possible as SDN usage continues to grow. There are new types of denial-of-service attacks that try to exploit potential scaling limits of an SDN infrastructure by locating specific automatic processes that use a significant amount of CPU cycles. An SDN could be very vulnerable to attacks because of the separation of control and data planes. A disruption in the communication path between the two planes could potentially result in a major hole that attackers can compromise.

The movement towards personalization in the workforce has been coined the “Consumerization of HR” – or “TalentSumerization”. It describes the idea of creating a social, mobile, and consumer-style experiences for employees inside the company. So, just as companies must ensure service excellence for their customers, HR must strive for service excellence for their employees. In fact, consumerization of human resources was identified as one of the most defining and disruptive trends of the industry. It not only changes the way we interact with employees, but also how companies market themselves. It is shifting companies away from a “seat filling” mentality to a “work experience” attitude. The new objective is to create one employer brand which provides a seamless employee experience – from the first interaction with potential candidates to the way we stay connected with former employees.
Quote for the day:
"Let us never negotiate out of fear. But let us never fear to negotiate." -- John F. Kennedy


This post first appeared on Tech Bytes - Daily Digest, please read the originial post: here
People also like
8 Signs You Should Avoid That Potential Employer
35 Sanity-Saving Moving Hacks For Families
A’ Design 2021—2022 Early Call for Entries
Twitter Opens Account Verification Program For Everyone; Here’s How You Can Apply
A Balanced Response to Allen Gwinn
What Is the Worst Credit Score?