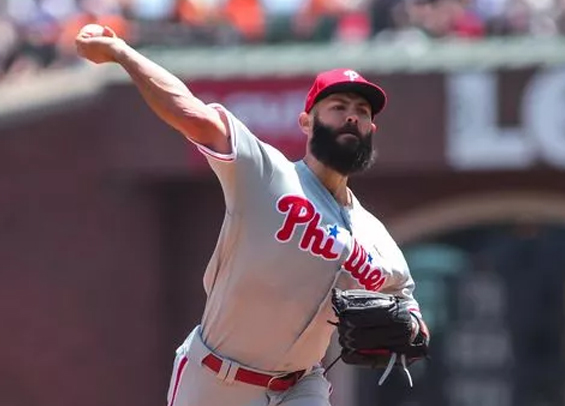 The Phillies stumbled out of the gate in Queens last night, falling to the Mets 5-1 at Citi Field in a game delayed by nearly two hours at the outset due to rain.

Bryce Harper was ejected in the fourth inning for comments regarding balls and strikes. Manager Gabe Kapler then stormed out of the dugout and made inadvertent contact with home-plate Mark Carlson attempting to restrain Harper. and could be facing a suspension from Major League Baseball.

It was that type of night - Rhys Hoskins provided the lone bright spot with a solo homer for the Phils.

Jake Arrieta surrendered four runs - three earned - on seven hits to take the loss. He struck out seven and walked just one. He didn't mince words following the loss, particularly about Harper's behavior that led to his ejection.

"He's got to understand, we need him in right field," Arrieta told reporters afterward. "I don't care how bad the umpire is. He wasn't great for either side. I'm out there trying to make pitches, he misses some calls. So what? We need him out there.

"We were flat from start to finish. Two-hour delay, it doesn't matter. We have to be ready to play. We weren't and it showed.

"It's troubling. I'm out there doing everything I can to win a game. I need my guys behind me and they weren't."

Arrieta said he did not speak with Harper before addressing the media.

"That can't happen,” Harper told reporters. “I've got to stay in that game and be there for my team, the fans and this organization. I've got to be better.”

Review: A Curse So Dark and Lonely by Brigid Kemmerer