Kapler wants Phillies to be bold and inspired by the Eagles 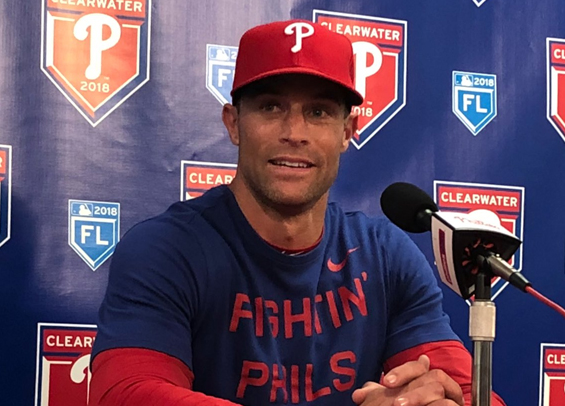 Gabe Kapler has spent weeks envisioning and crafting the message he'll deliver on Monday prior to the Phillies first full-squad workout. He'll have 60 players huddled around, all with their ears hanging on his every word.

Conviction. Boldness. Tenacity. These are the themes Kapler plans to touch on and build off of for the upcoming season.

Charismatic is the perfect adjective to describe Kapler; the man oozes confidence. Knowing this, it shouldn't come as a surprise that the themes he's championing mirror those so closely aligned with his personality.

So what exactly will he say come Monday?

Fresh off three straight 90-plus loss seasons, Kapler's immediate goal is to return the Phillies to relevancy again. This particularly means getting the club to the .500 mark which would equate to 15 more wins than the team had a year ago.

“We can win. It’s not like a delusional statement. It’s more like we all take that small step forward. We all get a little bit better. We all develop just enough where we surprise people. I think if everybody on our roster takes a small step forward, we have an opportunity to shock people. That’s the message we’re going to convey in camp.

For the Phillies to compete they'll need Maikel Franco to finally show he's a legitimate everyday third baseman. They'll need Rhys Hoskins to produce like he did last year but through an entire season. They'll need Odubel Herrera and Nick Williams to improve just a little more and they'll most certainly need help with the starting pitching.

Even with all of that on the table, Kapler points at the Super Bowl Champion Philadelphia Eagles as an underdog that proved doubters wrong.

“We would be foolish to not take cues from what the Eagles accomplished,” Kapler said of the Super Bowl champs. “Not just over the last couple weeks, but over the summer when coach (Doug) Pederson addressed his team and said, ‘This is what the world thinks and this is what we think you are. We get some development from our young quarterback, and we get some development on defense, we’re going to be much better than people think.’

Rah-rah mentality aside, Kapler has a valid point. Aside from knocking off the Nationals in the division, the Phillies could potentially reach the 81-win mark and contend late in the season for a wild card spot. Crazier things have happened. For any of that to happen though, guys need to progress and show they have staying power.

They also need to show boldness, particularly if they want to stay in the good grace of Kapler.

Kapler wants Phillies to be bold and inspired by the Eagles