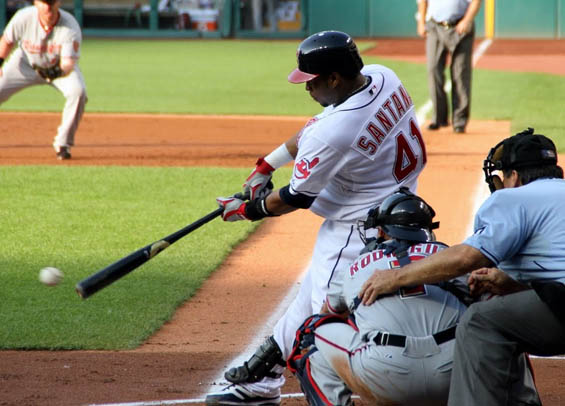 Carlos Santana knew the Phillies were a club nearing the final stages of a rebuild, but even he didn't seriously think they would make a play on him as a free agent this off-season.

"Yes, I'm surprised," he said with a smile. "But I'm happy for that because they believe in me."

The Phillies formally introduced Santana on Wednesday at a press conference at Citizens Bank Park. The club inked the 31-year-old to a three-year deal worth $59.5 million with a club option for 2021. The Dominican Republic native hit .259 with 37 doubles, 23 home runs, 79 RBI, 88 walks, a .363 on-base percentage and a .818 OPS last season in 154 games in Cleveland.

"It is our goal to put forth a lineup every day one through eight of players who grind at-bats, take pitches, work walks, hit for power, make opposing pitchers work," Phillies general manager Matt Klentak said. "There are few players in baseball who are as good at that as [Santana]."

"He comes from a winning environment," said Klentak. "He has leadership ability and he's turned himself into an impactful defender at first base."

Santana will help anchor a Phillies offense that struggled mightily to get on base last season and score runs. He and Rhys Hoskins now combine for a formidable power threat in the middle of the lineup.

"To have those two, it's a manager's dream," said Phillies manager Gabe Kapler.

Kapler wouldn't say where he will slot Santana in the batting order but noted he occasionally hit leadoff while in Cleveland and could fit just as well in the No. 2 or No. 3 hole with the Phillies.

"I'm excited," Santana said with a grin. "I know Philly has a lot of younger players, but my decision to sign here was because, Philly, they want me. They believe [in] me."

The attention now turns to the starting rotation, an area of extreme weakness and something the Phillies need to address.

"We’re going to continue looking into it, we’re going to try to add the best pitcher we can,” said Klentak, who entered last week’s winter meetings with the position playing a central role in his agenda. “I will tell you the same thing I told you last week: that the trade market is very expensive for young, controllable starters. The free agent market for the better starters is expensive in its own way. We just have to make sure that we find the right balance, find the right fit. But we would still like to add a starter if possible.”

With Santana pushing Hoskins to the outfield, it's possible the Phillies explore trading either Nick Williams or Aaron Altherr to alleviate the logjam of qualified corner outfielders and make an offer to acquire young starting pitching.


This post first appeared on Phillies News, Rumors And Analysis - Philadelphia Baseball Review, please read the originial post: here
People also like
A Guide To Visiting Antigua, Guatemala: The Best 5 Things To Do And See
Finns Beach Club – Back To Bali with the World’s Best Beach Club
Tekashi 6ix9ine Gets Punched In The Head Inside Miami Nightclub, Right In Front Of His Goons
Develop Home Accessories Shopping App like Westwing To Skyrocket Your Revenue in 2022