Mahrez Sparks Transfer Rumours After He Was Sighted At Chelsea Hotel 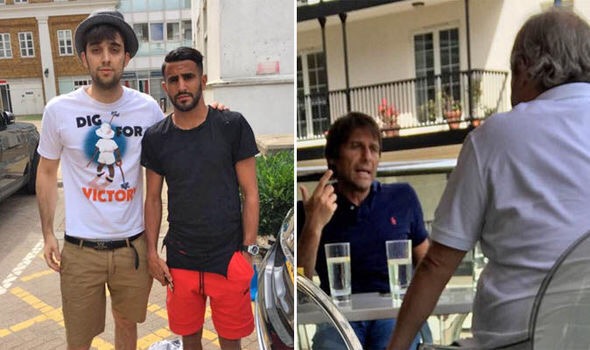 Riyad Mahrez has apparently been spotted at Chelsea’s match-day hotel - at the same time as Antonio Conte.  Mahrez has been linked with a move away from the King Power Stadium this summer after winning the title last season.

The PFA Player of the Year has attracted interested from Arsenal with Foxes boss Claudio Ranieri worried his star man is becoming “distracted”. But it appears that Chelsea may also be in the running for Mahrez, having already swooped for Leicester midfielder N’Golo Kante.

Italian journalist Alessandro Schiavone was at the Chelsea Harbour Hotel to interview Blues boss Conte, when he bumped into Mahrez. Schiavone posed for separate pictures with Conte and Mahrez, but did not suggest the pair were seen together. But he did say Mahrez was checking into the hotel, which is used by Chelsea before home games at Stamford Bridge.
Follow @wolexis

Mahrez Sparks Transfer Rumours After He Was Sighted At Chelsea Hotel