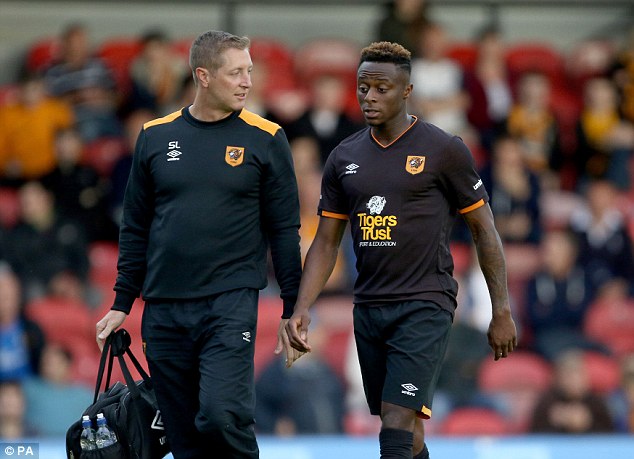 Hull full-back Moses Odubajo is likely to be out until 2017 after the club confirmed he had ruptured a ligament in his knee and will miss the next six months.
The 22-year-old former Brentford player sustained the injuryin a friendly with Grimsby on Friday and it follows last week's news that Allan McGregor and Alex Bruce will also miss the beginning of the campaign with problems.

'First and foremost, it's desperately disappointing news for Moses,' Tigers boss Steve Bruce told the club website.
'He was exceptional for us last season as we won promotion back to the Premier League and we expect him to be a top player for many years to come.'

Odubajo joined Hull from Brentford for £3.5million last summer and played a vital role as the Tigers Won Promotion back to the Premier League via the Championship play-off final.
Although he is set for an extended spell on the sidelines, both the player and his manager adopted a positive outlook on the news that he avoided damaging other ligaments which could have kept him out even longer.
Follow @wolexis