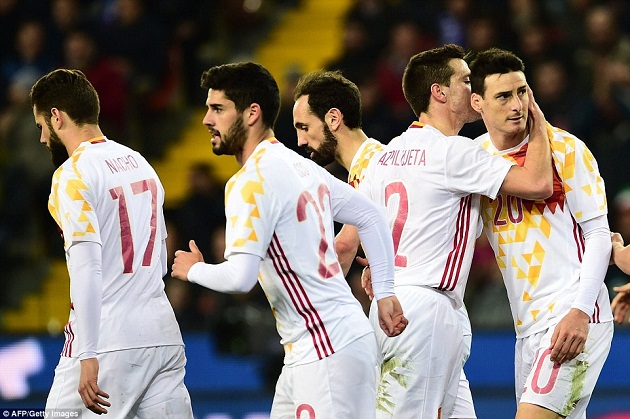 Italy 1-1 Spain
Italy are still waiting to avenge their Euro 2012 humiliation by Spain after veteran striker Aritz Aduriz forced a 1-1 draw at the Stadio Friuli.
Thursday night's friendly offered the Azzurri another chance to get revenge for the 4-0 humbling meted out by Spain when they retained the European Championship in Kiev four years ago.

Cannabis Stocks are Hot on the Watchl…
Giraffe running wild in Stratford Rad…
From Newbie to Digital Marketing Expe…
$50 Million Stolen from Upbit
The Ultimate Winter Bucket List Accor…
Italy boss Antonio Conte will target that trophy at this summer's finals before he returns to club management, and the signs are positive as his team dominated Vicente del Bosque's in Udine.
Antonio Candreva tormented La Roja in the first half, with second-half substitute Lorenzo Insigne taking over and tearing through the visitors' defence to break the deadlock.
But Aduriz, who at the age of 35 shows no signs of slowing down with Athletic Bilbao, denied Italy the win and proved Spain have a versatile range of attacking options heading into Euro 2016.
Turkey 2-0 Sweden
Sweden were beaten by two super strikes from Turkey Hot Shot Cenk Tosun on Thursday night.
The Besiktas striker latched onto a header from midfielder Ozan Tufan and unleashed a fierce left-foot strike into the net for the opening goal in the 32nd Minute.
Sweden then took control in the second half to earn a deserved 74th minute equaliser from Andreas Granqvist, who scored from close range.
Both sides had their chances to earn a winner but it was Tosun who proved the decisive figure nine minutes from time, heading home Selcuk Inan's cross past goalkeeper Robin Olsen
Other Games
Nicolai Jorgensen scored twice in five minutes as Denmarkdefeated Iceland 2-1.
Jorgensen's brace early in the second half held up despite Arnor Ingvi Traustason's consolation goal for the visitors in the 90th minute.
Simon Church saved Wales from a miserable Euro 2016 send-off in front of their own fans as Michael O'Neill was denied his his first friendly win as Northern Ireland manager in a 1-1 draw.
Craig Cathcart had fired the visitors ahead, but Church won a last-minute penalty when he was tripped by Gareth McAuley and he converted emphatically from the spot to equalise.
Ikechi Anya's first-half strike gave battling Scotland a 1-0 win over Czech Republic at the Generali Arena in Prague.
The home side had hit the frame of the goal before the Watford winger raced on to a Ross McCormack pass in the 10th minute to drive low past keeper Tomas Koubek.
Ukraine defeated Cyprus 1-0 as Taras Stepanenko scored the only goal following a set piece shortly before half-time.
Greece defeated Montenegro 2-1 with all the goals coming in an eight-minute span in the second half.
Giorgos Tzavelas opened the scoring for Greece on 54 minutes, only for Zarko Tomasevic to equalise two minutes later. But soon after, Nikolaos Karelis beat an offside trap and slotted home the winner.
Estonia held Norway to a 0-0 draw, while Malta and Moldova also finished goalless.
Follow @wolexis