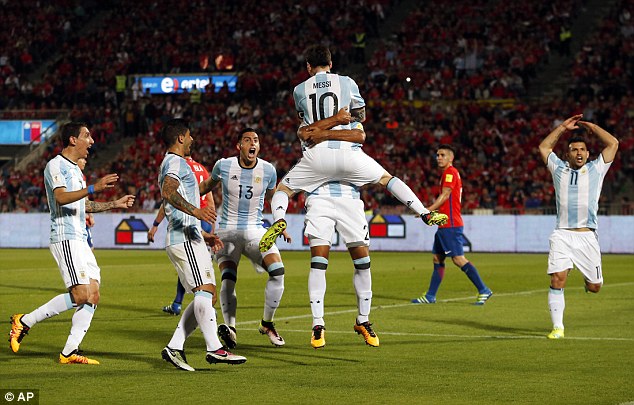 Chile 1-2 Argentina
Argentina, which had scored only two goals in its first four South American World Cup qualifiers, scored that many in the first 24 minutes Thursday in a 2-1 victory over Chile.
Argentina improved to eight points in five matches with a strong victory over Chile, which won last year's Copa America -- the continental championship.

London Natural History Museum
From Newbie to Digital Marketing Expe…
Online Brokerage Firm’s Suggestion on…
The Ultimate Winter Bucket List Accor…
How To Get From Lima To Cusco Peru {T…
Argentina was the runner-up in the 2014 World Cup, but has been below par qualifying for Russia in 2018.
Felipe Gutierrez scored for Chile in the 10th minute, but Angel Di Maria leveled in the 19th and Gabriel Mercado got another five minutes later. It was a bad start in qualifying for new Chile coach Juan Antonio Pizzi, who replaced Jorge Sampaoli.
Bolivia 2-3 Colombia
Colombia beat Bolivia 3-2 in La Paz with Edwin Cardona grabbing a late winner for the visitors.
James Rodriguez opened the scoring for Colombia when he brought down a pass from Carlos Bacca and slotted home an angled drive.
Five minutes before halftime the roles were reversed and Bacca latched on to a Rodriguez pass to put Colombia in the driving seat.
Juan Arce got one back for Bolivia from the penalty spot after 49 minutes but Alejandro Chumacero grabbed the equaliser with a spectacular strike before Cardona stole victory.
The result gave Colombia their first win since the opening match and left Bolivia joint second bottom of the table with three points from five games.
The top four sides qualify automatically for Russia 2018 and the fifth go into a playoff.
Ecuador 2-2 Paraguay
Elsewhere, a stoppage-time goal helped Ecuador rescue a 2-2 draw at home to Paraguay in World Cup qualifying on Thursday, preserving their record as South America's only unbeaten side and keeping them top of the 10-team standings in the race to Russia.
The result brought Ecuador's four-game winning streak to an end and means none of the 10 teams seeking to guarantee a place in Russia 2018 remain unbeaten.
Angel Mena got the equaliser for Ecuador from a suspiciously offside position in the second minute of time added-on.
Enner Valencia Opened the scoring for the home side after 19 minutes but Dario Lezcano equalised before halftime. Lezcano, who plays for Bundesliga club Ingolstadt, got his and Paraguay's second 13 minutes into the second half.
Ecuador remain top of the South America qualification table after four wins from five games The result was the least the home side deserved after hitting the woodwork three times.
It ensured that whatever the results of the three outstanding games in this round, the Andean nation will continue to lead the table with 13 points from five matches. Uruguay, who are in second place and face Brazil in Recife on Friday, have nine points from four matches.
Follow @wolexis