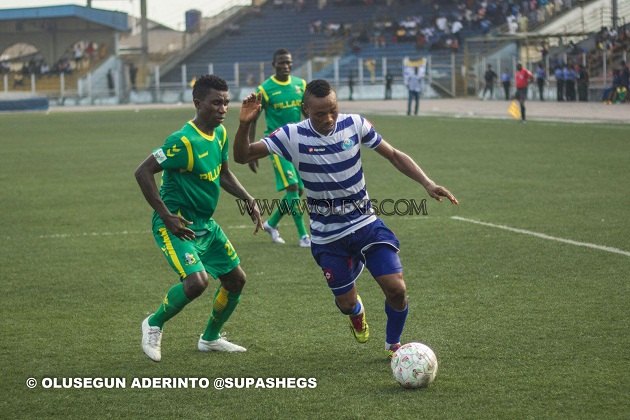 Akwa United 3-1 Heartland
Akwa United defeated Heartland 3-1 on Wednesday in a Nigeria league game at ‘The Nest of Champions’ in Uyo.
Akwa now have four points from two games, while Heartland have two points from four games.

Homemade No Churn Raspberry Ice Cream
Mr Vegas Casino Review – Get up to a …
Aniekan Ekpe opened the scoring for Akwa when his long range effort was deflected into the net in the 58th Minute.
Two minutes later, Onyebuchi Ajunwa equalised with a long-range shot however 10 minutes to the end of the game, Kufre Ebong headed in Yusuf Adio's cross to restore Akwa lead 2-1
Michael Ibeh Okora took the game beyond the reach of Heartland when he headed in Nnamso Edo's free kick in the 90th minute.
Warri Wolves 0-0 Rangers
Warri Wolves and Enugu Rangers played out a goalless draw at the Warri City stadium on Wednesday in a Week 4 game of the NPFL.
Wolves now have five points from four games, while Rangers have seven points from four games. Both teams failed to see the back of the net in 90 minutes of action.
The highlight of the game was the substitution of Rangers goalkeeper Nana Bonsu due to injury in the 14th minute, when he was replaced by Akor Itodo.
Ismaila Gata scored a brace to help Niger Tornadoes beat Nasarawa United 2-0 on Wednesday for their first victory of the season.
MFM 2-1 Sunshine Stars
Super Sub Stephen Odey was the match winner for MFM FC on Wednesday as they beat Sunshine Stars 2-1.
MFM are now second on the table with nine points, same as leaders Lobi Stars.
Former Sunshine Stars striker Musa Newman opened the scoring in the 25th minute against his old club.
Kadri Samad leveled scores for ‘The Akure Gunners’ in the 39th minute off Stanley Dimgba's pass after he had dashed down the flank.
Substitute Odey scored the winner for MFM with four minutes to end the game. Sunshine stars Sunday Abd was sent off in the 90th minute after a second booking.
Abia Warriors 0-0 Kano Pillars
Kano Pillars stopped hosts Abia Warriors from consolidating their position on top of the league table on Wednesday when they played out a goalless draw in Umuahia.
Abia Warriors who are now without top striker ChisomChikatara after he moved to Morroco now have eight points from four games, while Pillars have seven points from four games.
In the 20th minute, Pillars left back Jonathan Zikiye skipped past two markers only to fire wide off target.

Lobi thus toppled Abia Warriors from the top of the standings with nine points from four games. El Kanemi remain bottom of the table having lost their first three matches
.
Okpotu opened the scoring in the fourth minute from the penalty spot after he was fouled.
He doubled Lobi's lead with another spot kick in the 55th minute after Nasiru was fouled by Yahaya, who was sent off. Bernabas Imenger put the game to bed the third goal to the joy of the home fans.
Okpotu has now scored four goals this season.
Wikki Tourists 3-0 Plateau United
Wikki Tourists thrashed neigbours Plateau United 3-0 in a Week 4 game of the NPFL in Bauchi on Wednesday.
Wikki now have seven points from four games, while Plateau United have six points.
Godwin Obaje scored the opening goal in the 32nd minute with a low drive off Emmanuel Onuoha's pass. Obaje doubled the hosts’ lead in three minutes later with a header off Waziri Christopher's corner kick.