Stamford Bridge: A Possible Breeding Nest For The Super Eagles? 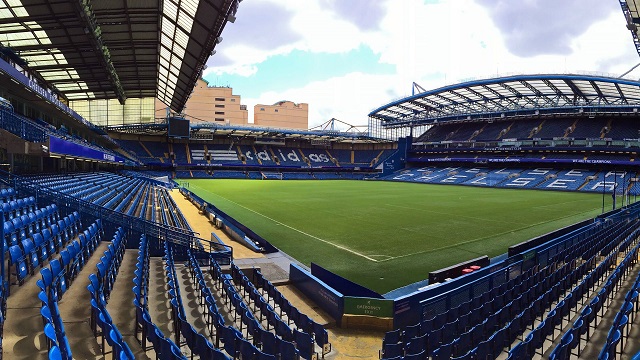 The Super Eagles of Nigeria currently top the group of death in the race to qualify for the World Cup in Russia. Nigeria's win against the Desert Foxes of Algeria came with a display that was nostalgic and rekindled old faith in the abilities of the national team.

How to Create a Winning Black Friday …
Crypto Collectibles Startup Acquired …
Coach Depression sent in the play, wh…
Markets gaping down a bit, USMCA, Gun…
LUCK RUNS OUT - NFL's Andrew Luck's R…
There is a certain swagger of this current crop. An innate understanding of the game and an ability to read it. This ability to play the game beyond brute and physical tenacity is largely demonstrated in this current side of players.
The super eagles is at the youngest I have ever seen, mixed with experienced heads who occupy important leading and playing positions in the team. Large numbers of this youthful side had the chance to experience or be exposed to proper Football development under the best coaches and facilities that could be available to them.
Of the first eleven in the game against Algeria, eight of the players had a form of professional development before they turned 18 outside Nigeria. Of those eight players, two were above the age of 25. You cannot teach old dogs new tricks, and while I'm not condemning coaching levels in the country, we certainly are not moving towards the idea of philosophies and winning games on the drawing board as quick as our European counterparts.
The journey to the pinnacle of football in Europe is a tedious one for Africans. Only few make it at an early stage or are lucky to stumble into the elite teams. Work permit regulations have seen top talents stray out to lower divisions of low ranked football leagues. When effort and determination finally see these players get to play football at the best levels, the national team does not get to benefit with "real age" coming to knock on all doors.
Rome was not built in a day and the Super Eagles, NFF willing, would get there. For now, a certain style of poaching can work for us. Most European nations have had and still have African players turning out for them. No harm if we get some back in a different scenario.
And what possible place would be better than Chelsea's Stamford Bridge or precisely Cobham Training Centre to get this talent?
Home to current players Victor Moses, Mikel Obi and ex, Kenneth Omeruo, Chelsea's training ground is sheltering some of the finest Nigerian talents in England. Typically, not known for player development like Arsenal and Man Utd, the Blues hold five possible future Eagles- Fikayo Tomori, Ike Ugbo, Dominic Solanke, Ola Aina, Tammy Abraham- in her care.
These players are by no means honorable mentions but players making waves at whatever level of football they have found themselves in. All five players are F.A Youth Cup and UEFA Youth League winners with Ola Aina the only one with an U-21 Premier League trophy.
Capturing these players is no easy feat, the hardest of the lot would Dominic Solanke who has consistently seen himself play at all levels of the Three Lions except the senior team with burgeoning displays that suggest he might find himself there someday.
While the rest are not short of talent and promise, a lot of English players who turned out at youth levels for England did not get to be capped at senior level or found themselves out of the squad as quick as they got in. Why should they be good for Nigeria if not suitable for England? As best as we claim the Super Eagles to be, we are ranked 60th in the world.
Of course there are certain drawbacks to this and criticisms in large quarters. Right now no one is complaining about the inclusion of foreign-trained players because it is paying dividends, so is the hush tone regarding the appointment of Rohr than Salisu Yusuf as technical adviser.
Poaching these players to help sustain a conveyor belt that goes from the youth level to division 2 in Sweden is necessary and indeed helpful. Not only does it ensure sustainability, it increases competition among players in Europe who at times get too comfortable after finding themselves earning a currency different than the Naira.
The road to national identity and football development is a long one; one which is a journey rather than a destination. If picking the right people at this junction means a smoother and easier ride, of what use would it be if we keeps our doors shut?
Follow @wolexis

Stamford Bridge: A Possible Breeding Nest For The Super Eagles?