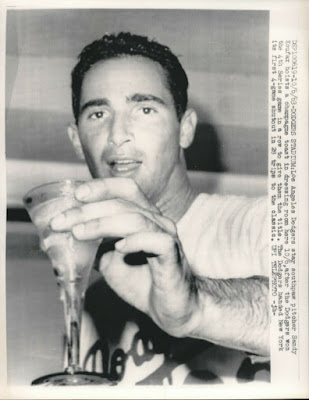 I still believe that we'll get to witness something like this. Per the descriptor on the reverse:

Los Angeles Dodgers star southpaw pitcher Sandy Koufax hoist a champagne toast in dressing room here 10/6, after the Dodgers won the 4th World Series game in a row to give them the title. The Dodgers handed New York its first 4-game shutout in 28 trips to the classic.

UPI photo photo came from an eBay listing, dated 10/6/1963. Below are more links to check out:

“Probably the key thing that we were looking for and the most important trait, if we could summarize it in one sentence, was somebody who was capable of building trust and relationships with both players and the front office,” Zaidi said in a conference call with reporters on Tuesday night. “In my experience with Gabe, and as we went through the interview process and got to learn more about him, it became clear to us that he was the person who could best execute on that.”

"As I've had time to reflect on it, I've realized the biggest mistake we made was asking the wrong questions. In those situations, we asked, 'What do we have to do?' instead of, 'What is the right thing to do?' I can only speak for myself -- I'm truly sorry that from my perspective I didn't ask the right questions and address things appropriately. I view it as a learning experience, and it's something I want to take into the future in the organization and hold us to that highest standard."

Four people who were with the Astros in 2017, including pitcher Mike Fiers, said that during that season, the Astros stole signs during home games in real time with the aid of a camera positioned in the outfield.

Now, an MLB investigation into the Astros’ culture in the wake of the team’s firing of assistant general manager Brandon Taubman could be expanded to determine who in the organization was aware of the sign-stealing practice — and whether it continued or evolved in subsequent seasons. The Athletic’s confirmation of rule-breaking by Houston is limited to 2017.

Even if the Astros are guilty, I can see no reasonable way to fix 2017. It's way too late to do something like that. Nevertheless, penalties should be in order should the allegations bear fruit. BTW, Daniel Preciado at Dodgers Nation shared Yu Darvish's response to this mess (link here), and also shares some quotes from Andrew Friedman (link here). Davish has moved on from that game and explicitly writes, "I sucked." Friedman adds some intrigue by saying that he never believed in the alleged pitch-tipping by Darvish - something else was afoot.

Josh Bard, who just left as #Yankees bench coach, is being considered by the #Dodgers to be their bullpen coach.
— Joel Sherman (@Joelsherman1) November 12, 2019

“I was a major league baseball player for six years and left,” Bean told Yahoo Finance’s On the Move. “I was living a secret life, and the culture was just so different. And think what's exciting about this opportunity is we have a chance to change the narrative.”

...
“I wasn’t a player that made a lot of money,” Bean told Yahoo Finance’s On the Move. “I always knew I was going to have to go to work. But there are so many people that have been afraid up until recent times and still many in the workplace that don’t want to be identified specifically based on their private life or their sexual orientation or gender identity expression because of the way that others are going to view them unfairly.”