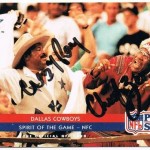 The passing of Zema “Chief Zee” Williams is a big deal, but not just for the loss of arguably the Redskins’ staunchest fan.

The Chief is from an age when fans were more expressive. You know, before the NFL corporationists wrested control of the game experience from fans. They snuffed out all the originality that made NFL game days a hella lot of fun.

Banners made from bed sheets strung from the upper deck of every stadium.

Rainbow Man quoting scripture. (How did he get premium seats to all those game anyway?)

That, and a winning team, made RFK a rocking place even without the vibrating bleachers.

Chief Zee was born in that world. So was his Cowboys counterpart, Wilford “Crazy Ray” Jones. Zee and Ray became good friends who staged their Redskins vs. Cowboys mock battle at every Redskins-Cowboys game.

Broadcasters never failed to show it.

Chief Zee may have been part of your Redskins world all your life, but if you were not be of age in the 1970s, you missed this fan-fueled joy. Good times!

“Zema Williams is also in poor health. He was confined to a wheelchair last summer, but was able to make Redskins games during the season. Both Crazy Ray Jones and Chief Zee Williams created their characters. Although closely identified with their teams, they had no official connection to the Cowboys or the Redskins.”

~ Redskins Hog Heaven: The Cowboy rides into the sunset.

There’s a Chief Zee for almost every team now, but that live-game stadium originality is gone. Every bit of free space has been sold to advertisers.

Too bad. The homemade banners were more fun to read.

In time, the Chief himself morphed to become a sacrosanct anachronism.

Zee was a DC voter. Maybe they will issue another proclamation upon his death.