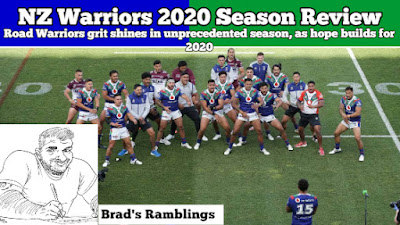 With the 2020 NRL season now completed, I decided it was the perfect time to comb through the Warriors year and conduct my season review.
2020 has been a season like no other, with COVID changing the landscape there were times when it looked like the season was not going to continue.
After a less than stellar start, the Warriors found themselves in a situation where they had to base themselves in Australia for the entire season.
The odds were stacked against the New Zealand side. Still, as the season progressed, the Warriors found a tough edge and a top-eight finish started to look like a possibility, but unfortunately it wasn't to be as they finished the year in 10th position.
2020 was filled to the brim with talking, so let's just get into my review.

My Take on 2020
The Warriors ended the 2019 season in 13th place and in my 2020 season preview I was not overly confident that the Warriors would improve, so I predicted another 13th place finish.
I was wrong with that prediction with the Warriors finishing 10th, and despite still missing out on the playoffs I think they have shown enough to give me hope that 2021 will be happier times for the Warriors and other fans alike.
I think the 2020 season could easily be broken into two separate sections, the Kearney era and the post-Kearney era.
Up until his final game as coach in round 6, the Warriors only manages two victories and four heavy defeats. They simply lacked attack and struggled with their defensive structure, the Warriors needed to do something and releasing Kearney from his contract was the decision they made.
I had given my thoughts on the decision back when it happened but to reiterate I was not a fan of how the decision was made but believe it was a decision that should have been made a while ago.
This lead to Todd Payten's promotion to head coach, to take over this side at that point in time with all the struggles this season had brought was not ideal, however instead of the Warriors falling apart like many had predicted, the Warriors started to grow a tough exterior and took several of the best sides in the competition to the limit. Besides two heavy defeats to the Storm and the Sharks, the Warriors looked a better outfit and were close to cracking the top eight, including my match of the year, a resounding 36-6 win over the Newcastle Knights in round 16.
This saw Todd Payten's run as coach ended with six wins and eight losses, still not a great record, but again it was more about the effort shown in those performances.
Overall the 2020 season was still disappointing, but in comparison to 2019 it was a welcomed step in the right direction, the Warriors just need to ensure that they take everything the platform they have set this season and build on it in 2021.
My Positives for 2020
There were a few things that brought a smile to my face this season, but I have selected my top four positives for 2020.
Grit

What are your thoughts on the 2020 season?
Who was your player of the year?
Which player needs to improve the most?
What realistic changes would you make for next season?
How do you see the 2021 season going?

Subscribe to Nz Warriors 2017 Season Preview : Above The Line - The Kearney Era Begins