Which player win the 'golden ball' award in Champions Trophy, 2013 ? 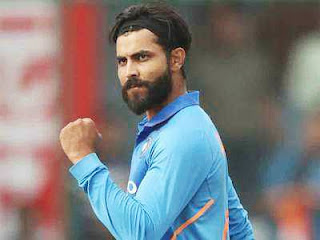 Ravindra Jadeja was born on 6 December 1988. His father Anirudh was the watchman of a private security agency. His father wanted him to become an army officer but his interest was in cricket, he was afraid of his father in childhood. His mother Lata died in an accident in 2005 and the trauma of his mother's death almost left him cricket. His sister Naina is a nurse. He lives in Jamnagar. Ravindra Jadeja also played lot of matches in IPL.
Jadeja married Reva Solanki on 17 April 2016. They had a daughter in June 2017. Ravindra Jadeja's wife Reva Solanki joined the Bharatiya Janata Party in April 2019, and her father and sister joined the Indian National Congress in the same month.

Jadeja made his first Under-19 for India in 2005 at the age of 16. He was selected in the Indian team for the 2006 U / 19 Cricket World Cup in Sri Lanka. India finished runners-up by defeating Jadeja by 3 Wickets in the final against Pakistan. He was the vice-captain of the winning Indian team in the 2008 U / 19 Cricket World Cup. He played an important role in the tournament with the ball, taking 10 wickets in 6 matches at an average of 13.
Jadeja made his first-class debut in the 2006-07 Duleep Trophy. He plays for West Zone in the Duleep Trophy and Saurashtra in the Ranji Trophy.
In 2012, Jadeja became the eighth player in history, and the first Indian player to score three first-class triple centuries in his career, including Don Bradman, Brian Lara, Bill Ponsford, Wally Hammond, WG Grace, Graeme Hick and Mike Hussey. . His first performance was against Orissa in early November 2011, in which he Scored 314 runs off 375 balls. His second match against Gujarat came in November 2012, in which he scored 303 runs. His third came against Railways in December 2012, where he scored 331 runs in 501 balls. At the age of only 23, Jadeja reached this point.
Jadeja attracted the attention of national selectors with his strong all-round showing in the Ranji Trophy - 42 wickets and 739 runs - in 2008–9 and was selected for the ODI series in Sri Lanka. He made his international debut on 8 February 2009 in the final match of the series in which he scored 60 *, although India lost the match. In the 2009 World Twenty20, Jadeja was criticized for not scoring fast in India's loss to England. After consistently losing as all-rounder Yusuf Pathansufar, Jadeja made his way to the No. 7 ODI squad in late 2009. On 21 December 2009, Jadeja was awarded Man of the Match in the third ODI against Sri Lanka in Cuttack. Match award after a four-wicket haul. His best bowling is 4–32.

He returned to the Indian ODI in the third ODI against England at The Oval in London. India reached the crease with 58-5 after 19 overs, scoring 78 runs, including 112 with skipper Mahendra Singh Dhoni and 59 with Ravichandran Ashwin in just 5.1 overs and 234-7 in his 50 overs. Helped to achieve. He also scored 2–42 runs in his 9 overs and was named "Player of the Match", but England won the rain-affected game. His performance in the fourth ODI at Lord's was mixed: he threw four crucial overs away from the boundary with a poor throw, but then took a brilliant catch on the boundary off the last ball.
In the second T20I of the Australian tour in February 2012, Jadeja achieved the figure of 1/16 in 3 overs and had two runs out in the Australian innings. India won and Jadeja was awarded Man of the Match.
Following his brilliant performance at the beginning of the Ranji Trophy season 2012-13, when he scored two 300+ scores in 4 matches (4/125 and then 303 *) against Gujarat in Surat; 331 and 3/109 against the railways at Rajkot; Trophy 2013-13), he was called to join the 15-man India Test team to play the fourth Test at Nagpur in England. In his Test debut in Nagpur against England, he bowled 70 overs and scored 3/117 runs.
During the second ODI in the India-England series in Kochi, Jadeja smashed 61 runs off just 37 balls, taking India to a total of 285. In the second innings, he put on a brilliant spell of 2 wickets for 12 runs in 7 overs. Beat England by 127 runs and tie the series 1–1. The performance earned Jadeja the Man of the Match award.
In the historic 4–0 home Test series against Australia in February – March 2013, Jadeja took 24 wickets, dismissing Australian captain Michael Clarke five out of six times in the series, who confirmed his place in the team as an all-rounder. Of. Despite not contributing much with the bat. His seven-wicket haul for five runs in the second innings of the last Test match earned him the Man of the Match award. He played a key role for India in the ICC Champions Trophy 2013. He was the highest wicket-taker of the tournament with 12 wickets, which gave him the Golden Ball. He scored 33 * off the bat and took 2 wickets in the final against England. They were also named by ICC and ESPNCricinfo as part of the 'Team of the tournament'.

Jadeja is the first Indian bowler to top the rankings after Anil Kumble, who topped the table in 1996. He is the fourth Indian bowler after Kapil Dev. Maninder Singh and Kumble were ranked number 1.
Jadeja scored his first half-century on 20 July 2014, playing against England and saving the match for India, which struggled at 235/7. He scored 68 runs in just 57 balls. His 99-run partnership with Bhuvneshwar Kumar gave India a target of 319 runs for England.
Jadeja was selected for the 2015 Cricket World Cup in Australia and New Zealand despite not being fully fit due to a shoulder injury. He took 9 wickets in 8 matches. His return with the bat was modest, scoring just 57 runs from 5 innings. India lost in the semi-final against Australia. After his poor performance in the next ODI series in Bangladesh, he was dropped from the Indian team.
Jadeja made a strong comeback in the next Ranji season (2015-16), where he took 38 wickets in 4 matches and scored 215 runs, including 3 50+ scores. His strong performance was rewarded with selection for the Indian Test team facing South Africa at home. Jadeja helped his team to victory with 23 wickets in 4 matches. He scored 109 runs in the series, with significant knock downs. Jadeja was included in the Indian limited overs tour of Australia to play 5 ODIs and 3 T20Is. In ODIs, Jadeja bowled financially in a series where more than 3000 runs were scored in 5 matches. He took 3 wickets at an economy rate of 5.35. He was the second highest wicket taker in T20I, taking 5 wickets in 3 matches. In the second game of the series, Jadeja made a blistering return from his own bowling to take the crucial wicket of Shane Watson and he also dismissed Aaron Finch, who was batting for 74 at the time.

He participated in all four tests against the Australian side. He took 25 wickets and scored two easy half-centuries in that order, earning him the Player of the Match as well as the Player of the Series award in the latest concluding series on 28 March 2017.
He became the first pair of spinners to jointly become the No.1 bowler in the history of ICC Test rankings along with Ravichandran Ashwin. On 5 August 2017, Jadeja became the fastest left-arm bowler to reach 150 wickets in terms of number of Test matches played (32).
On 5 October 2018, he scored his first century in Tests. In March 2019, during the second ODI against Australia, Jadeja became the third cricketer to score 2,000 runs for India and take 150 wickets in ODIs.
In October 2019, in the first Test against South Africa, Jadeja took his 200th wicket in Test cricket.

Ravindra Jadeja was picked by the Rajasthan Royals for the inaugural season of the Indian Premier League (IPL) in 2008, and was instrumental in their victory (the Royals defeated the Chennai Super Kings in the final). Jadeja scored 135 runs in 14 matches at a strike rate of 131.06, his best score being 36 * against Kings XI Punjab. He also performed better in 2009, scoring 295 runs at a strike rate of 110.90 and scoring less than 6.5 runs per over. Rajasthan Royals captain Shane Warne called Jadeja a "superstar in the making". Warne also named him "Rockstar".
Ravindra Jadeja in IPL opted out of the 2010 due to a ban arising out of contractual irregularities. In 2011, he was bought by Kochi Tuskers Kerala for $ 950,000. The Kochi Tuskers were eliminated from the IPL in September 2011, and in the 2012 IPL player auction, Jadeja was bought by Chennai Super Kings for $ 2 million (about Rs 98 million), in a tie-breaker with Deccan Chargers. The same amount was subsequently bid. . Jadeja was the most expensive player of this auction. [37] He won the Man of the Match award against his all-round performance (48 off 29 balls, 5 for 16 from 4 overs) in the second match of the season.
For his performance in 2014, he was nominated in the Cricinfo CLT20 XI.
Ravindra Jadeja, playing for Chennai Super Kings, performed superb spin bowling in Chennai for the IPL 2015 match on Mother's Day; He took four wickets for 11 runs, bowling brilliantly against Rajasthan Royals.
Sunil Gavaskar said in March 2013 that Ravindra Jadeja with Cheteshwar Pujara was a role model for the youth. Jadeja's contribution to India's 4–0 Test series victory over Australia in February and March 2013 was praised in the media and Gavaskar called him one of the architects of the victory. Clarke's dominance of Jadeja was also praised in the media. Jadeja was named Player of the Week by Portal Cricket World after the end of the fourth Test.
Since his performance at the 2009 ICC World Twenty20 event, Jadeja has been a frequent target of sarcasm and jokes at cricket portals and by Indian cricket fans. On Twitter and Facebook, he is jokingly referred to as Sir Ravindra Jadejson, which went viral by calling him an online joke. When Jadeja was clean bowled for 16 not offering a shot in the Chennai Test in February 2013 against Australia, a cricket portal described his dismissal as "short of Jadeja's 284 runs, a fourth first-class triple century." Was ". After his good performance against Australia in the 2013 Test series, Jadeja's jokes on Twitter were compared to Rajinikanth. His Wikipedia article was described as temporarily barbaric for making fun of him. In April 2013, Mahendra Singh Dhoni, Suresh Rayand Ravichandran Ashwin, Jadeja's partner in Chennai Super Kings, tweeted several Jadeja jokes on Twitter, in one of which Dhoni referred to him as Sri Sri Sri Lalit Sir Bhagwan Ravindra Jadeja . In response, Jadeja stated in April 2013 that it was a joke that everyone was enjoying, and that he had no problem with the prefix sir.

Top 5 sports that bring families together

Sports Greats Who Walk Away From The Game Too Soon

Which player win the 'golden ball' award in Champions Trophy, 2013 ?