This is the 53rd submission in a long series about Marion Jones, a former elite sprinter who won (stole) honour and earned (stole) endorsements, fame and fortune by method of fraud.

This story is being told in its entirety, because Marion Jones is unable to do it herself. Though parts of this story may be historical in nature, they are of essense to the sum of the whole insofar as they tell a story of a woman who is more complicit in the BALCO affairs and her own drug-taking than she has led on.

pleaded guilty in Manhattan U.S. District Court to three felonies concerning that: conspiracy to commit bank fraud and two counts of bank fraud, according to his attorneys. His sentencing was initially set for 2007-November-1, and he had initially faced between 37 to 46 months in prison his lawyer, William Alcott, said.

Montgomery was subsequently sentenced to the maximum 46 months and five years of probation for his role in the felony activity.

Excerpted from the arrest record:

Included amongst those checks are at least seven fraudulently obtained checks, in the total aggregate amount of approximately $2,485,000, which were sent by DOUGLAS SHYNE, NATASHA SINGH, and TOYBE BENNETT in the area to TIMOTHY MONTGOMERY, STEVEN Riddick, and NATHANIEL ALEXANDER in the area, to be deposited into accounts associated with them.

According to journalists from the Virginia Pilot – the local angle news coverage – one of the checks Alexander wrote on the $850.000 account was made out to Marion Jones for $25.000 – a check which was endorsed and deposited into her account, but never paid out due to the $850.000 check not clearing.[1]

Marion Jones was not a suspect in this case, and the defendants – including Montgomery, Wells and Riddick – were presumed innocent until they were proven guilty. Three defendants prior to in the case had pleaded guilty.

first laid claim to the check deposited into Marion Jones’s account, but as it turned out, however, Marion Jones had lied to Federal investigators about having knowledge of the check, and she was charged with a felony in her criminal case.

Montgomery subsequently blamed Marion Jones for his having taken part in the illegal scheme, stating in court on 2008-May-13 that Marion Jones granted him “permission” to participate by her acquiescence on the matter when approached by Montgomery. Judge Karas debunked that claim, stating to that there was no single, solitary shred of evidence that any of the other defendants or another person forced him to make the bad decisions he did.

’s attorney, Robert W. McFarland, wrote in a court memo prior to ’s confession that Montgomery and Riddick were set up and taken advantage of due to having celebrity status.

“The high-profile nature of both Tim Montgomery as a world-class sprinter and Steve Riddick as a world-class trainer make them perfect victims for crooks, thieves and (Prince), who is a repeated convicted felon.”[2]

sang another tune prior to the opening of the trial.

“I sincerely regret the role I played in this unfortunate episode,” said in the statement released this morning by the attorneys.

“I have disappointed many people and for that I am truly sorry. I look forward to moving past this event and being a positive influence in my community in the future.”[3]

’s guilty plea effectively removed Marion Jones from the courtroom as a witness in the case. Moreover, according to a statement from his lawyers, his plea did not require him to testify at the trial of his former coach, Steven Riddick, and other co-defendants.

Riddick, who claimed that he believed the checks were for payment toward training foreign athletes – and declined to testify in the case – believed that the case itself would have been a wash, and he’d resume his day-to-day training within a short period of time.

“I feel like I haven't done anything, so I feel confident about it,” Riddick told ESPN.com.”It'll probably run a couple weeks. Then, I'll be glad when it's over so I can get back to track and field business.”[4]

The case didn’t take the expected turn Riddick imagined, and the Olympic gold medallist’s defence lawyer Bryan Hoss tried having the case dismissed due to lack of federal evidence, with U.S. District Judge Kenneth Karas denying those motions on 2007-May-3.

Hoss had even turned the blame on Riddick’s involvement on .

“Mr. Riddick is under intense pressure, as he is facing serious federal charges. People in that situation frequently do and say desperate things,” Heaphy said in an e-mail to the AP. “Tim Montgomery is surprised and disappointed that Mr. Riddick has chosen to defend himself by making desperate and outlandish allegations like those made by his counsel in this trial.”[5]

Closing arguments began on Monday, 2007-May-7, with Hoss maintaining that there was reasonable doubt that Riddick was guilty of the charges – prosecutors failed to prove Riddick was not conned or tricked.

Assistant U.S. Attorney Daniel Walter Levy closed his case by stating that Riddick did conspire with others to steal money from banks by cashing counterfeit checks for hundreds of thousands of dollars. 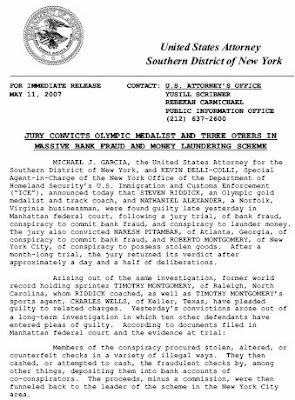 Levy stated that he now knew that Riddick had not one single agreement to train any Kuwaiti athletes, and was guilty beyond a reasonable doubt after Riddick had deposited checks for $80.000, $375.000 and $450.000 into his account that were supposedly meant to pay for training for Kuwaiti athletes.

Wells, who was both Marion Jones’s and Montgomery's agent, aided Montgomery's scheme by depositing two of the checks, totalling $1.1 million, into accounts he controlled, court documents stated. He pled guilty earlier in the spring of 2007 in federal court to a felony charge of bank fraud and was ultimately ordered to 46 months in prison.

was not free from the drug-dealing speculation, however, as he was arrested on Wednesday, 2008-April-30 an indictment which charged him with conspiracy to distribute heroin. That case carried with it a mandatory five-year spell in prison when was found guilty and, ultimately sentenced on 2008-October-10. The evidences, according to Judge Karas in the check-fraud case, were compelling against , though the pending case at the time was not used in determining his prison sentence in his check-fraud case.

Together, will spend the next nine years of his life behind prison walls.

In his role at Wells Vector Sports Management, Wells is also an individual athlete agent who was feared to lose his agent registration. The firm, according to the Associated Press, provided services for Marion Jones and a number of other track and field athletes and football players.[6]

Wells faces a review by a three-member USATF committee which is considering whether to decertify Wells for his involvement in the bank fraud case. If USATF disbars Wells, it will mark the first time an agent has been decertified through a committee process.

Marion Jones’s legal counsels have lived on the principle that cheats are to be absolutely and unconditionally discredited and distrusted. Her attorneys have maintained that those who cheat are to be discredited as viable or reliable sources of information, with the connotation that cheats will say and do anything to keep under the gun.

The irony in Riddick vs Montgomery–two staunch supporters of Marion Jones and each other– is beyond belief.

What is even more unbelievable is that Marion Jones chose Riddick in the first place following his having been charged in April 2000 with several counts of “forgery of documents submitted to the commonwealth for reimbursement” from 1996 to 1998–making his likelihood of direct involvement in the check fraud case even higher. As earlier stated, Riddick ultimately pleaded guilty to one count of forgery and was sentenced to probation.

Oddly enough, Hoss and Riddick pleaded with judge Karas for leniency. They filed a long list of Riddick’s accomplishments, including winning the gold medal at the 1976 Olympics, and at least eight letters of support to the courts.

“These letters paint a picture of Steve Riddick that the court was not able to see from the witnesses called at trial,” Hoss wrote in a letter to the judge.

“They depict an honest, caring and trustworthy individual who instills proper values in his athletes in the highest level of coaching in world track and field,” Hoss says in the letter.[7]

Judge Karas sentenced Riddick to 63 months in prison for his part in the scheme, despite the plea to be lenient in using his discretion to sentence.

The number of men who have been associated with cheating now runs at five-consecutive (Hunter, Montgomery, Francis, Riddick, Wells) for Marion Jones, who has had working or personal relationships associated with cheating. In two of those cases–both involving checks–Marion Jones had been perceived to have apparently held an open account used without her knowledge or authorisation. Her agent, the last of the lot, silently waved his white flag when confronted.

Riddick, the professed evader of previous drugs tests–or, better word, cheater–during his competition days came to Marion Jones defence at the leaking of the “A”-sample, stating to the effect that there was a conspiracy against Marion Jones. I believe Tim Montgomery had already used that line when he stated someone was out to frame him. As I recall, Trevor Graham used the same rationality when attempting to defend Gatlin in the media. Graham stated that Gatlin’s positive test was due to sabotage from Gatlin’s masseur. Graham has, as time has gone along, apparently recalled more and more details surrounding the Gatlin positive, The Washington Post reported Saturday, 2006-December-16. [8]

The article, a 2.335-word story written by Amy Shipley, is meant to shed light on the entire Gatlin affair, and to highlight the steps Graham was to have taken to prevent the masseur from poisoning his prize athlete’s career. The masseur, Graham states, was out to get Graham– through Gatlin, because of Graham’s having turned in the syringe to Don Catlin.

This was an act of revenge, Graham stated.

Readers gained an appreciation, at best, of Graham’s magical ability to instantly recall important details four months after they happen, and to associate Gatlin’s positive test with a woman’s hormone treatment gel.

All original content and investigative news written and published by EBY in Göteborg, Sverige unless otherwise stated.