After 24 hours of tricky sailing through light, fickle breeze the Volvo Ocean Race fleet were today locked in an all-out drag race towards Porto Santo, the first major turning mark in Leg 1.

Leaders Vestas 11th Hour Racing are now within 200 nautical miles of the waypoint, a tiny island that forms part of Portugal’s Madeira archipelago.

A Guide To Visiting Antigua, Guatemal…
The Friday Roundup – Ambient Audio, Y…
What would happen to a modern-day Mos…

At the 1300 UTC position update they had a six-mile jump on second placed MAPFRE, with team Akzonobel a further nine miles back.

The three frontrunners were matched for speed at around 10 knots– and with the 11-knot breeze due to stick around it’s likely that Charlie Enright’s outfit will win the sprint to Porto Santo, rounding it in the early hours of Thursday morning. 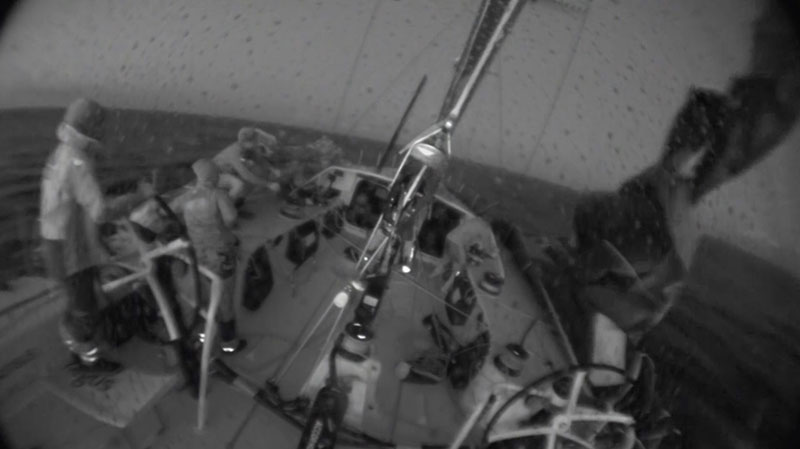 If Vestas 11th Hour Racing can hold on to the top spot until then it will pay big dividends – they will be able to accelerate away as they bear away, hoist their downwind sails and head north towards a new waypoint added to the course (see below) and then on to the finish at Lisbon, Portual.

Meanwhile 30 miles to the north-east of Vestas 11th Hour Racing a battle was raging for fourth place.

The second group of boats – Team Sun Hung Kai/Scallywag, Dongfeng Race Team, Team Brunel and Turn the Tide on Plastic – were practically lined up with a five-mile west to east lateral split at 1300 UTC.

All seven teams have now tapped into the new wind following a painfully slow night that saw many of them bobbing along at just a few knots.

“The last two nights have definitely been quite contrasting – the night before we had 30 knots and plenty of water going everywhere, while last night we were drifting along at two or three knots just trying to keep the sails full,” explained Team Brunel’s Peter Burling. 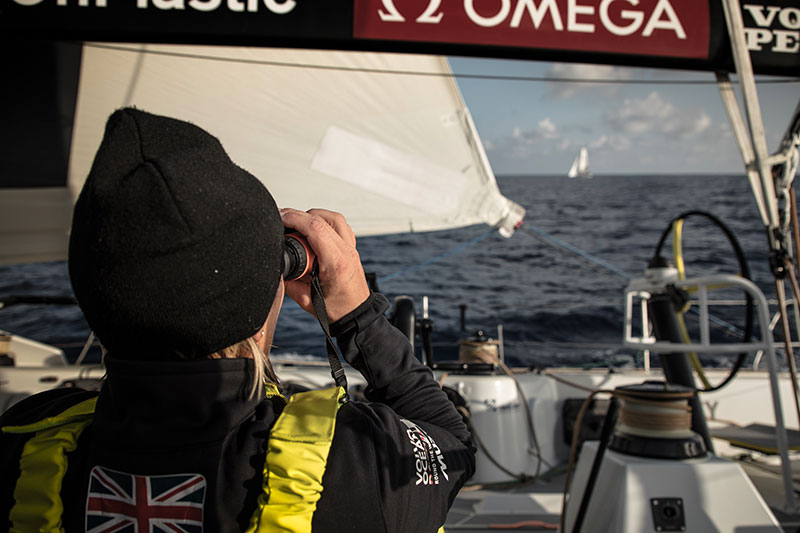 “It’s interesting for us to be in this group of four boats, trying to chase down the leaders. They’ve got a pretty good jump on us but we’re learning a lot by sailing so close to these boats for such a long period of time.”

Team Sun Hung Kai/Scallywag crew had more to worry about than where their rivals were – in the early hours of the morning skipper David Witt called everyone up on deck when there was an issue with the swivel pin at the top of their masthead Code Zero, sending the enormous headsail into the water.

It could have proved costly for the Hong Kong-flagged team but with all hands on deck they made light work of the recovery and were back to full speed in no time, with minimal impact on their position.

“We’re happy to be fighting in the pack of four boats, we’ve been sailing three miles away from each other for most of the past 48 hours now,” said Ben Piggott, in a written report from the boat. 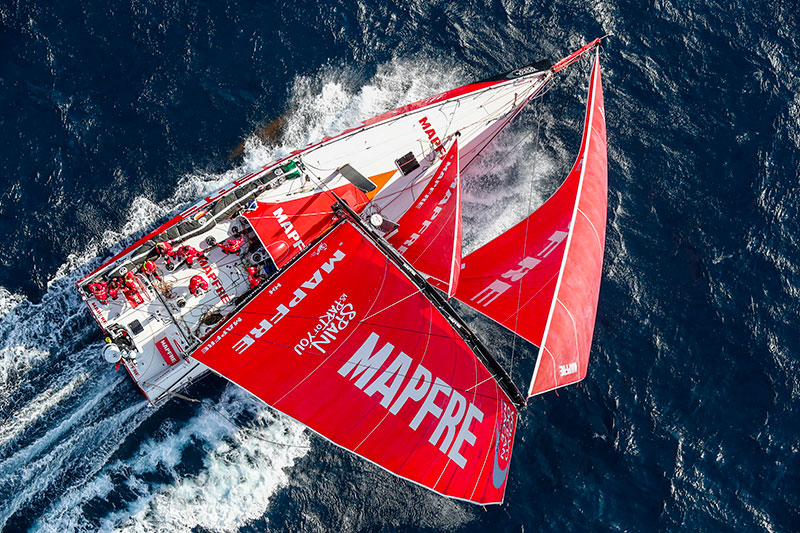 With 30 miles to make up on the leaders and fourth place to defend, the enormity of the challenge ahead was not lost on Dongfeng Race Team’s Stu Bannatyne, among the fleet’s most experienced sailors with seven previous Volvo Ocean Races to his name.

“We’ve got a lot of work to do yet,” he said. “It’s looking very difficult for us to get back into that lead group at the moment. We need to make sure we stay ahead of the group we’re in.”

The backmarkers will have an additional opportunity to make up ground as earlier on Wednesday, Race Director Phil Lawrence communicated a change in the race course for Leg 1 to the competitors.

A virtual mark, called ‘Porto Santo North’, approximately 220 miles due north of Port Santo Island, has been added as a mark of the course. Like Porto Santo, the teams will need to leave this mark to starboard, before turning east to head to Lisbon.

Leg 1 has a target time of seven days, and this additional waypoint adds approximately 200 miles to the race course pushing back the ETA for the leaders at the finish line in Lisbon to late Saturday morning.

The post Tussles at the front and back of the Volvo Ocean Race Fleet appeared first on Sail Universe.

This post first appeared on Sail Universe, please read the originial post: here
People also like
A Guide To Visiting Antigua, Guatemala: The Best 5 Things To Do And See
The Friday Roundup – Ambient Audio, YouTube Mistakes and GIFs
What would happen to a modern-day Moses in America?