We continue our breakdown of each Division in the NHL, team by team. Today we will breakdown the always entertaining Metropolitan Division. This is easily the most top heavy division in the league. On one end you have the defending Stanley Cup champion and the defending President's Trophy winner. On the other end you have the teams that earned the top two picks in the draft. The top three teams in this division seem to be a lock, the rest are all questions marks vying for a wild card spot.

Some people are buying into this team too much. They were the worst team in the NHL for a reason last season, but I have seen some outlets projecting them as a wild card team. This is still a very bad team. The addition of Nico Hischier is great, it always helps to have the first overall pick, but Hischier isn't McDavid or Crosby. Also, signing Marcus Johansson provides a little more offense, but his career high in points is only 58. Signing Brian Boyle adds a little snarl to the lineup, but no more scoring. Offensively this team is going to be bad. Taylor Hall is not good enough on his own to spark this team. Their best hope was Ilya Kovalchuk return to the NHL and they could trade him for assets, but he screwed the Devils again. The Devils are woefully bad defensively. I know this because Ben Lovejoy is a top four defensemen on their team. I see no way the Devils do not secure themselves a lottery pick again in the 2018 NHL draft.

I do not see anywhere the Flyers improved from last season. Their only off-season addition was Brian Elliot, so they actually got worse in net. They drafted Nolan Patrick with the #2 pick, but I do not expect much impact from him in his rookie season. This team is also embarrassing on the blue line. Their best defensemen is Shayne Gostisbehere and he is just a winger lined up as a defensemen. The rest of their defense core is garbage. Radko Gudas is not even a quality NHL defensemen and he is maybe their second best blue liner. I honestly fear that Flyers could give up a record number of goals. That is how bad they will be in their own end. The one saving grace for them is they have some very talented forwards. Giroux, Voracek and Simmonds are all worthy top line scorers and have proven themselves. For this team to have any hope of making a wild card push, these guys will each need to score well over 30 goals.

The Islanders are a bit of an unknown. They have a nice mix of high skilled forwards, good depth and solid defensemen. John Tavares is entering the final year of his contract and regardless of whether or not he plans to re-sign in New York, you know he wnats to prove he is worth a mega-contract. They added Jordan Eberle in the off-season and expect him to help their offense fill the stat sheet. I like their balance on the blue line. Nick Leddy and Thomas Hickey can skate and move the puck. Boychuk and Seidenberg are more physical presences. The greatest weakness of this team is goaltending. Between Thomas Greiss and Jaroslav Halak they do not have a worthwhile starting goalie. Without a goalie to help steer the ship, I cannot foresee the Islanders in the playoffs.

The Hurricanes are another popular pick to make a significant rise in the standings. A lot of NHL writers are actually picking this team to make the playoffs. That is a tall task for the team that finished next to last in this division just last season. The Hurricanes did have some nice off-season acquisitions including Justin Williams, Trevor Van Riemsdyk and Scott Darling. Darling especially is being looked at as the guy who will turn their fortunes. He is set to replace Cam Ward as the franchise goalie. These additions are expected to provide a boost to the team's good young players. Justin Faulk and Noah Hanifan are the young defensemen they are counting on to make them a strong and aggressive defensive team. On offense everyone knows about Jeff Skinner. He has to be great in order for this team to be successful. However, it can not all be on Skinner. Jordan Staal, Victor Rask and Sebastian Aho need to fill the stat sheet as well. I do not see Carolina in the playoffs this season. They will make a push, but the rest of this division is simply too talented.

The Rangers are not a serious Stanley Cup contender, but they are still a talented team with great defense and goaltending. King Henry is not the same goalie he was five years ago, but he is still one of the NHL's top netminders. At 35 years old, the Rangers are going to need to give him a lot of nights off to keep him healthy. That means the rest of the Rangers will need to step up. The addition of Kevin Shattenkirk keeps the Rangers afloat in the playoff race. He was the most coveted prize of a fairly weak free agent class. He also helps to make what is already a good defensive group even better. Marc Staal and Ryan McDonagh have been the pillars of this defense for awhile. They now have a little pressure taken off them. The biggest worry for the Rangers is their lack of quality center icemen. Mika Zibanejad is their top center and at best he is worthy of being a second line center. If they plan to go anywhere in the playoffs, the Rangers need to find themselves a #1 center.

At the start of each season, we always say "Is this the year they finally win the cup?" I am done asking that question. The Capitals are a great regular season team with too many players that cannot step up in the playoffs. Ovechkin, Holtby and Backstrom are simply not winners. That is how you explain the league's most talented team winning back-to-back President's Trophies, but never getting out of the second round. We all know how great they are offensively. Besides Ovechkin and Backstrom they have Evgeny Kuznetsov, TJ Oshie and Andre Burakovsky. So scoring is not a concern. On defense they are led by John Carlson and Matt Niskanen. They also happen to have one of the league's best goalies in Braden Holtby. The problem is two-fold. First, they are getting old fast and the current core has proven nothing in the playoffs. Second, they actually lost some key players from last season. Justin Williams left for division foe Carolina and Karl Alzner found greener pastures in Montreal. Simply put, as long as Crosby and Malkin are still playing at a high level, the Capitals are not going far in the playoffs. 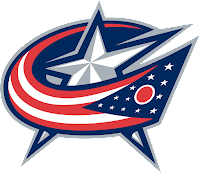 The Blue Jackets have some boom or bust potential this season. Last year they surprised everyone with 108 points in the regular season. We will see if that success is repeatable. They made one big off-season move, trading for Artemi Panarin. The bread man immediately becomes their best offensive player. We'll see how he gels with coach John Tortorella, I expect not well. Bobrovsky is an elite goaltender that is perfect for the Columbus playing style. He also happens to have maybe the defensive core in the eastern conference playing in front of him. Jones, Murray, Werenski, Savard and Johnson are all special players that can match any team's top line. The Jackets are not too shabby on offense either. Cam Atkinson finally had his breakout season with 35 goals last season. Add in Alex Wennberg, Nick Foligno and Brandon Dubinsky to make for a very solid offense. My concern is the Torts factor. He is a good coach with a track record of flaming out fast and ugly. As long as the team buys into low scoring games and giving their bodies to block every shot, things will be great. However, if players like Panarin and Atkinson do not jive with Torts, things could go bad.

The first team in the salary cap era to win back-to-back Stanley Cups is built to battle for a third. All the key components are back for another run. They did suffer a few offseason losses such as Nick Bonino, Marc-Andre Fleury, Matt Cullen and Trevor Daley. All contributed to their success, but each was little more than a role player. When you have Sidney Crosby, Evgeni Malkin, Phil Kessel and Kris Letang you do not sweat losing a few role players. Beyond the team's elite talent they are chalked full of young playmakers that have great chemistry with the veterans. Jake Guentzel was the breakout star of the 2017 NHL playoffs. If his chemistry with Crosby continues, he could be the 40 goal scorer we have been waiting for Sid to have. The Penguins great offense is complimented with a good group of defensemen. Brian Dumoulin became the cornerstone of their defense in Letang's absence last season. Do not forget about Olli Maatta, Justin Schultz and Ian Cole. The other great news for Pittsburgh is Matt Murray has another year of experience under his belt. Many hockey writers are wondering if the 23 year old is already the NHL's best goaltender. Hard to argue since he has never lost a playoff series. The Penguins are primed to make another Stanley Cup run. They are still far and away the best team in the Eastern Conference. The biggest worry is if they will have enough energy left in May, after back-to-back Stanley Cup runs.